Features of wild and domesticated hamsters

Many are familiar with hamsters as domestic inhabitants, cute animals, funny and friendly. 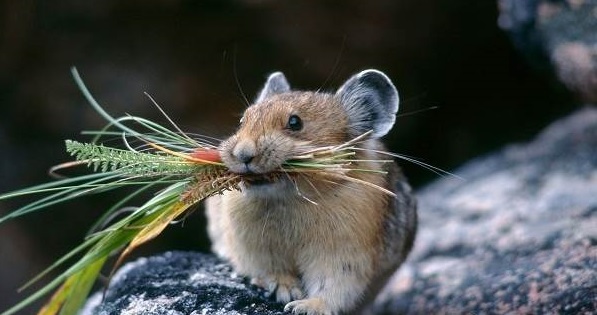 But in nature, these inhabitants are dangerous animals, which even outwardly differ significantly from the tamed brethren. From them comes the threat of both for a man and for a grown crop in a garden plot.

In 1930, an animal resembling a hamster was caught in Syria . Interest in this animal was based on the search for a «Syrian mouse», which children played in ancient Assyria. His offspring became the progenitors of the modern, numerous hamster family.

The spread of rodents in Central Asia, the steppe regions of Eastern Europe, and then extensive settlement to China and the United States was partly due to the use of animals as laboratory material and the domestication of undemanding creatures. In total, over 20 species of self-dispersed rodents of the main breed of the steppe hamster (ordinary) are distinguished. 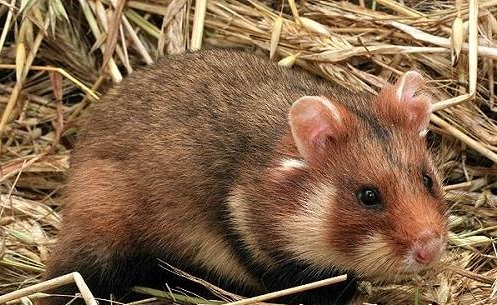 In the photo the steppe hamster

This is a small animal up to 35 cm long, with a dense body, a large head on a short neck. The tail reaches 5 cm. Weight is on average up to 600-700 gr. Small ears, antennae on the face and black expressive eyes in the form of large beads create a cute look for a fluffy bun on short paws with fingers, armed with short claws for digging holes and holes.

The animal is protected by sharp and strong teeth, which are updated throughout life. The hamster coat consists of a hair base and a dense undercoat that provides protection even on minus cold days. Coat color is most often yellow or brown, less common are tricolor spotted, black and white individuals. 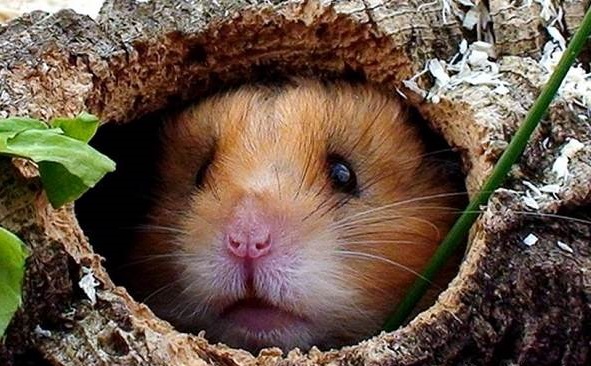 There are more than 40 bred varieties with shades of red, orange and gray, spots of different shapes and locations. The area of ​​distribution of animal hamsters is wide because of their unpretentiousness. It can adapt almost everywhere: mountainous places, steppes, forest belts, suburbs, — in burrows it shelters from enemies and bad weather.

The main habitat is the presence of feed. Animals are very fond of the area along the grain fields, often their holes are located directly on arable land. Various pesticides, herbicides in the cultivation of the land make the animals leave their homes and move to other places. The settlements of people attract the abundance of food, therefore steppe inhabitants often visit barns and courtyards with reserves. 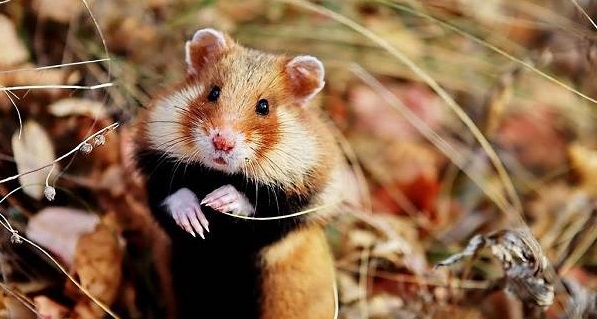 A special feature of hamsters is their amazing hoarding. The burrows reach gigantic sizes compared to the size of animals: up to 7 m wide and up to 1.5 m deep. In storage, the weight of accumulated feed is hundreds of times greater than the weight of an average hamster.

Special cheek pouches in the form of elastic folds of the skin allow transferring up to 50 grams of feed by increasing the volume several times. Farmers suffer losses from hamster robberies. Developed a whole system of resisting rodent invasions. They themselves are also the object of hunting in nature for birds of prey and owls, stoats and ferrets. 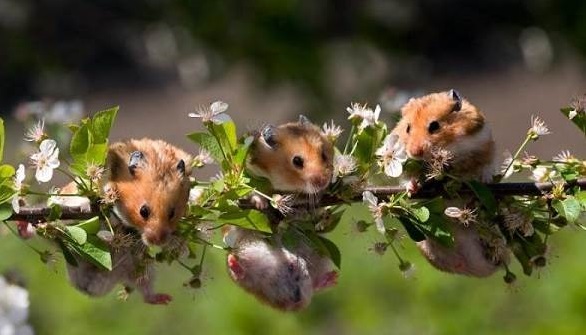 By their nature, hamsters are loners, aggressively opposed to all who encroach on their territory. They guard their property up to 10-12 hectares. The size of the enemy does not matter, there are known cases of rodent attacks on large dogs.

If related rodents run away from a meeting with a man, steppe hamsters can attack. Rodent bites are painful, can cause infection with many diseases, leave lacerations.

Ruthlessness manifests itself even to its individuals. The weaker will not be left alive from the strong and toothed relatives, if they consider the enemy to be in the marriage time or simply notice an unwanted guest in their stores. The activity of animals manifests itself in twilight time. Hamsters are nocturnal animals. During the day, they hide in burrows, gain strength for fearless hunting.

Deep dwellings are located 2-2 meters underground. If the soil allows, the hamster as much as possible will go into the earth. The living chamber is equipped with three exits: two “doors” for ease of movement, and the third leads to the storeroom with supplies for the winter life of animals.

The hamster uses accumulated feed only in the freezing cold time and in early spring. In the rest of the time seasons food consists of feed of the external environment. Above the burrows there are always dug piles of earth, covered with husks of grains. If a web has accumulated at the entrance, the dwelling is abandoned, hamsters keep the houses clean.

Not all hamsters hibernate, some species even turn white, so that attacks on snow cover are hardly noticeable. Those who wait in harsh weather in shallow sleep, periodically awake to reinforce their accumulated reserves. When the earth begins to warm up, in February, March or early April, the time comes for a final awakening. 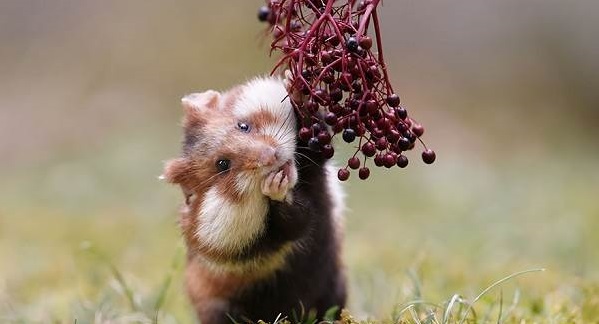 But before leaving finally, the hamster still regales on supplies, gains strength, and then opens the entrances and exits of the hole. First, males appear from the holes, and females a little later.

Peaceful relations between them are established only for the marriage period, otherwise they exist on an equal footing. Amazing ability hamsters swim well. They inflate their cheek pouches like a life jacket that keeps them in the water.

On the way to the gardens or gardens, animals will not abandon medium-sized insects and small animals. The food is dominated by vegetable feed: corn kernels, potatoes, pea pods, rhizomes of various herbs and small shrubs. 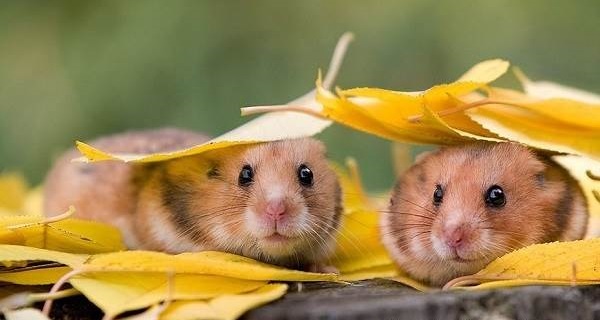 Next to the human hamsters housing is eating everything, he is an excellent poacher. Residents always try to get rid of such neighbors. Whatever hamsters eat, stocks for the winter are collected from various grains and seeds of plants.

Reproduction and life expectancy of a hamster

Hamsters quickly and actively breed due to the fact that the male has several families. If he is defeated by a strong congener in the marriage dispute, then he will always have another female to continue the race.

The offspring is born several times a year, each litter consists of 5-15 cubs. Appeared blind and bald, hamsters already have teeth, and on the third day they become covered with fuzz. A week later, they begin to see. First live in the nest under the careful supervision of the mother 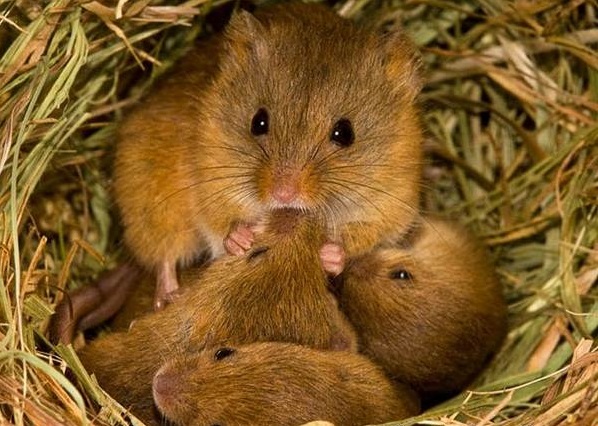 The female can take care even of other babies. But the kids, if they do not accept the foundling, they can crush him. In nature, animals do not live long, up to 2-3 years. In captivity with good care, the life span of pet hamsters increases to 4-5 years.

It is interesting that small cubs, 1-2 months old, getting into the home world of people, do not differ in aggressiveness. Buy a hamster for a child can be fearlessly, just need to remember that his quick care can be a psychological trauma.

At the same time, even for children it is useful to distinguish the Norman hamster from a popular cartoon and a living creature with its needs and character.

Tame and playful hamsters, for example, Dzungarian — will bring joy and excitement to any family. But the little steppe resident requires care and attention to their needs. A hamster can become a favorite of both children and adults.