Sea hare. Description and features of the sea hare

Anyone, but not hares. The names of a pair of marine animals cause confusion among the public. The sea hare is both a seal and a mollusk. Names are given to them by the people. Officially, the seal is called lahtak, and the clam is allysia. But, since the people have united them under the same name, we will do the same with the devoted animal articles.

Description and features of the sea hare

The sea hare, bearded seal is nicknamed the Russian Hypericums. They hardly harvested seals of a single species of the genus Erignathus. Lakhtaki shy and cautious, like hares. Associations with the long-eared were added by the manner of movement of the seals by land. Outside the water, the bearded cubs bounce like hares.

Dimensions in bearded oats are not hare. The seal is heavy, recognized as the largest in the marine fauna of Russia. Individuals weigh 360 kilograms. The average weight of 220-280 kilo. Females rarely exceed 217 kilograms. Almost half of the mass is fat.

In length lahtaki reach 2.5 meters. At the same time, the girth of the pinniped chest reaches the 161st centimeter. Against this background, the seal’s head looks miniature. Be a bearded long ears, as befits a hare, the impression was different. 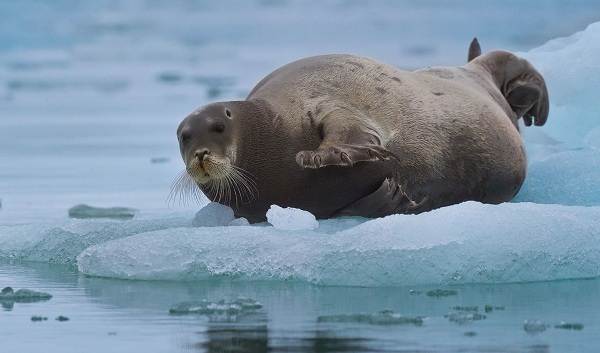 However, the seal has only internal shells. They look like holes in the sides of the head. The neck of a pinniped rabbit is almost absent. This is common to many seals. But the location of the front flippers almost at the neck is atypical. In addition, the limbs of the animal are shifted to the center of the body, and not to the sides. Lahtak painted in gray and white tones. On the back runs a darker, but blurred streak. On the head sometimes there are light spots. 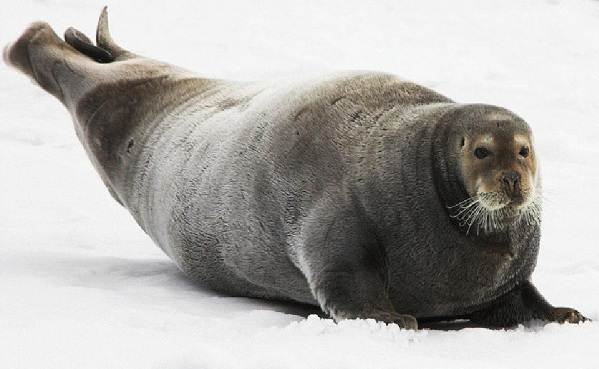 The sea hare moves by leaps like hares living on land

The sea hare the mollusk of a true hare, too, resembles distantly. An animal similar to a large slug has parapodia. These are lateral growths of tissues. They make the body of allysia massive. But the leg, on which the mollusk is crawling, is narrowed and stretched.

Parapodia come in handy to the sea hare in swimming. Straightening lateral processes, the clam soars in the water. Parapodia are reduced, like the pectoral fin of the skates. In the photo, the sea hare «reveals» the secret of his name. On the head of the animal there are horns. They rise and sway, like bunny ears. 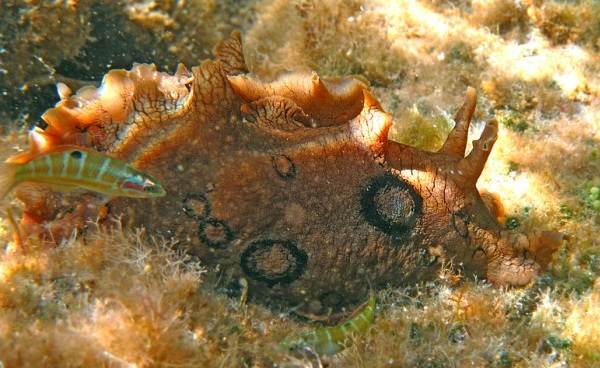 Another distinctive feature of the species is the gill slits on the right side of the body. Holes are hidden under the fold of the mantle of the animal. Allysia weighs 300-600 grams, depending on the species. Among tropical unpacterial mollusks it is not the most bulky, but large.

The color of the mollusk is different. There are brown, purple, yellow, black, gray and even spotted species. Paint adds a liquid that hares have mastered to produce to meet the enemies, like cuttlefish. 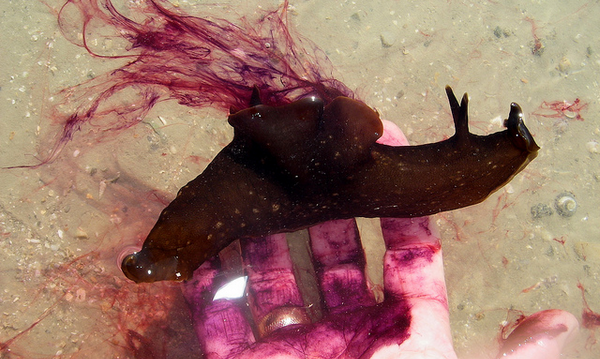 Only in mollusks the secret is not black, but colored. Most often the protective liquid is red. She literally beats off the attackers’ appetite, containing special substances that depress hunger.

What are the reservoirs found

The seal of the sea hare is a inhabitant of northern latitudes. Animals occupy shallow waters of the Arctic Ocean. Seals of the species do not swim beyond the Hudson Bay. Towards the Pacific, hares are spread to the Tatar Strait.

Loving the north, lahkas do not “wander” to the pole. Individual individuals fell to the edge of the earth on drifting ice floes, animals that have come off the native coasts. They, by the way, are predators. Favorite dainty lahtak — gastropod mollusks. 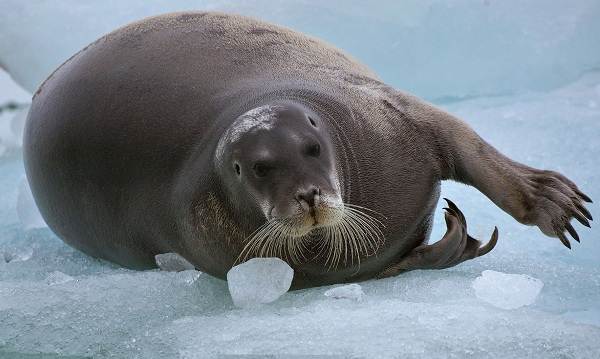 The namesake of the seal could just fall into his mouth. However, the sea hare mollusk lives in tropical seas. Habitats of species do not overlap. Since the mollusk hare dwells in warm waters, lobsters and starfishes feed on them. The herbivore is protected by ink and disguised as the color of the bottom. This is partly due to the variety of colorings of allysia. Allysia spread widely. Sometimes the animal «wanders» in the subtropics. But, the main accumulation of sea hares is observed near the equator. 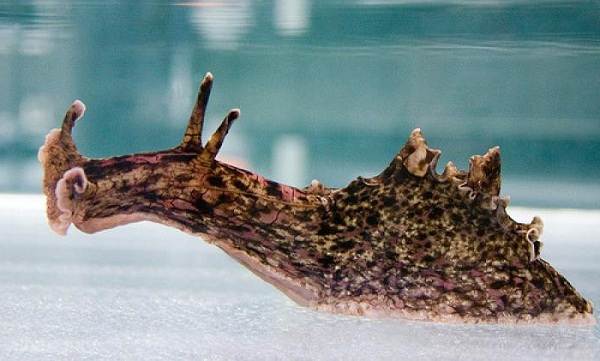 In the north, the sea hare lives alone. Giant seals do not divide into subspecies. But the tropical hare classification is extensive. Dwarf species does not exceed the length of 7 centimeters. The color of the animal is olive, burgundy or brown. Dark individuals are seen in the Indian Ocean and the Red Sea.

The largest allysia is Californian. Representatives of the subspecies reach a length of 75 centimeters. According to the name, the giants live on the coasts of the Pacific Ocean along North America. 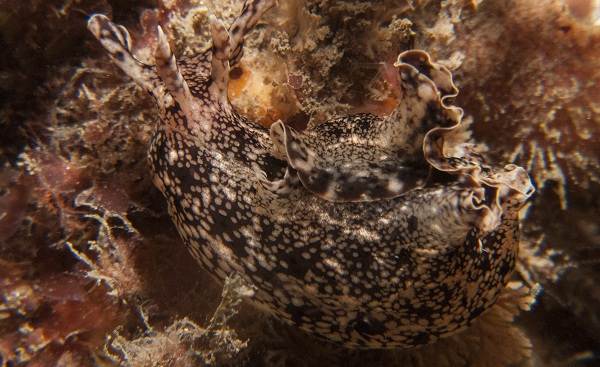 California Allysia is the largest species of sea hares

Reaching often only half a meter in length, California allys weigh about 7 kilograms. Not every predator can swallow such a mollusk. Giant green anemones and large lobsters mainly encroach on Californian individuals.

Compends in size with the California mollusk black sea hare. The color of the subspecies is due to the food consumed. Shellfish eat dark algae. However, let’s talk about feeding sea hares separately. 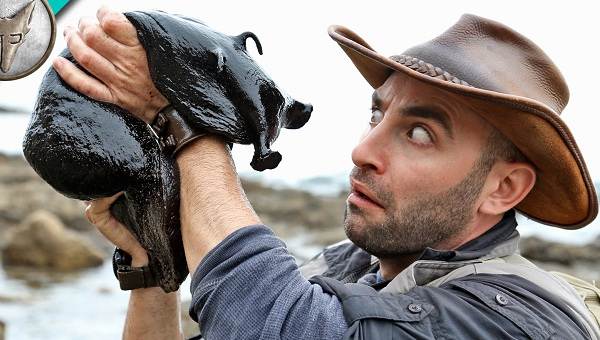 In the photo is a black sea hare

Seals hares dive for prey to a depth of about 70 meters. Sometimes, animals drop to 150 meters. Here beartails are found not only by mollusks, but also by crustaceans. Hares do not compete with walruses living in the neighborhood. A related species, too, feeds on mollusks, but prefers hinged, with shells. 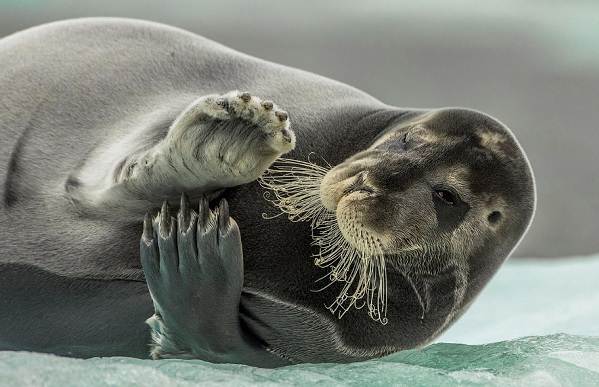 Hares mollusks live and feed at depths of about 20 meters. Here, Allysia is looking for plant food and places to fasten her foot. The last mollusk prefers to stick to stones and rocky protrusions. Accordingly, the sea hare should be sought in areas of the seabed with complex relief, boulders and an abundance of algae. 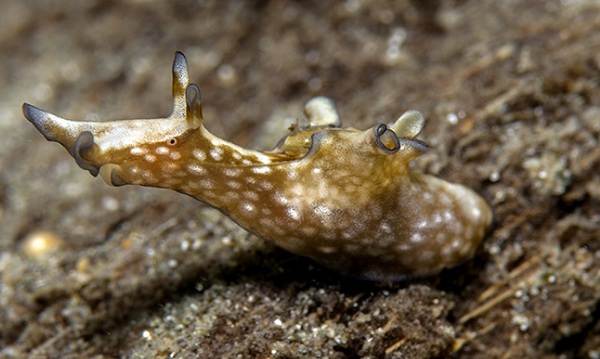 The average life expectancy of northern seals is 30 years. The time this animals spend alone. To pack animals, bearded animals do not belong, although they tolerate their relatives nearby. Individuals unite only during mating periods. Females with children are also inseparable. The rest of the sea hares are independent.

In the breeding season, male bearded seals begin to sing. Serenades sound ominously, but from a musical point of view they are harmonious.

Having chosen the best singer, the female comes into contact with him. For about 2 months, the baby seal holds the partner’s material in the body without producing eggs. Then fertilization takes place, and 9 months of pregnancy begin.

But, from the moment of closeness to childbirth pass 11 months. So seals adapt to the conditions convenient for themselves and mating, and childbirth, falling in the middle of summer. 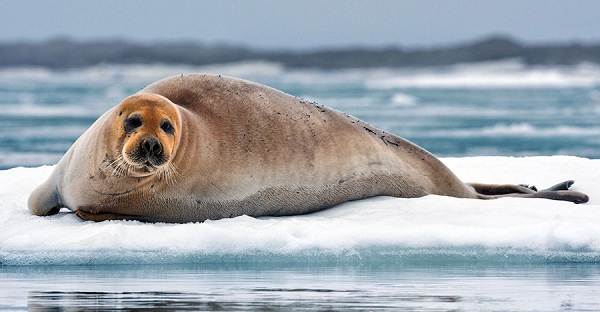 Lahtaki live-bearing. In the clam of the sea hare caviar. Her animals lay in shallow water. At other times, the giants are removed from the coast. There, especially giant species, live up to 200 years. California scientists once claimed a 405-year-old animal was discovered. However, later a denial of information was received. Test data showed that allysia 190 years. 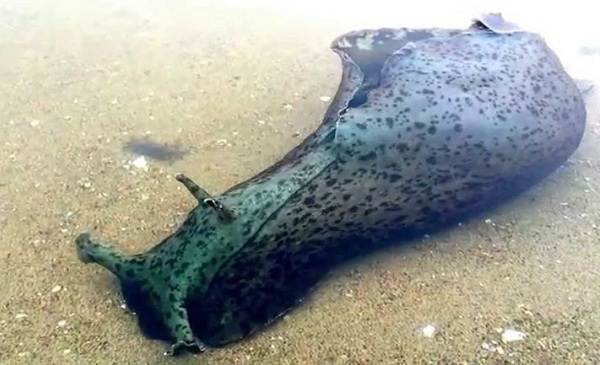 Longevity allows the mollusk to develop, with the primitive nervous system, the ability to addict, to memorize the simplest commands transmitted via touch. Allysia, by the way, helped get the Nobel Prize to Eric Kandel. He received an award in the field of neuroscience. The main part of the experiments was carried out on sea hares.