Features and habitat of a spider of a jumper

The name «spider — a jumper» quite wide, includes about 600 childbirth and 6000 types. Representatives of this family are famous for the sight, extremely sharp for spiders helping them both with hunting, and with explaining the ground. 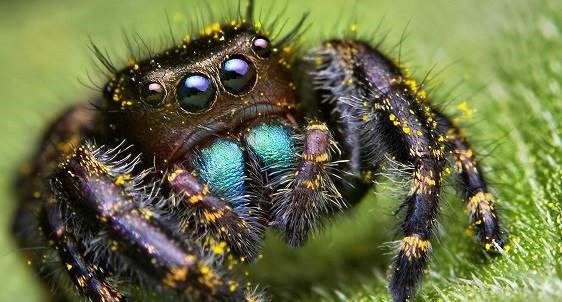 The bimodal system of breath of a spider consisting both from lungs and from a trachea is also remarkable. It is possible to meet an ordinary spider jumper practically everywhere. Representatives of the majority of types live in hot tropics, are widespread in a moderate zone of the woods, deserts and semi-deserts, mountains (Euophrys omnisuperstes was found by scientists at top of Everest in 70kh).

One of hobbies of a spider — to be heated on the sun, a long time being on any surface suitable for this purpose, even the vertical. 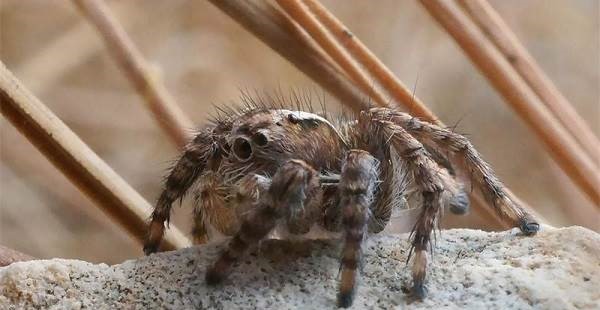 Well developed visual system consists of eight eyes which are settling down in three ranks. Four big eyes crowning «face» of a spider enter the first row. Forward eyes not only quite sharp-sighted, but also very mobile (can make the movements to the left-to the right, up-down), they allow spiders to distinguish and estimate a form of subjects, and also their color.

The second row is presented by two small eyes which hid in a middle part of «face», the third row consists of two larger eyes which are in head corners behind, on border with a breast. Thus, the spider has constant visibility of nearly 360 degrees that is extremely useful when hunting and helps it to avoid an undesirable meeting with the enemy. 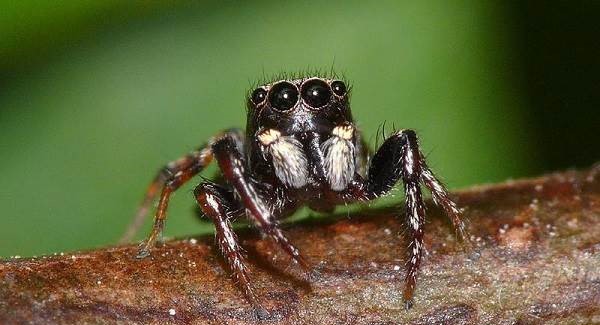 Uniqueness of visual system consists also in ability of a spider to see each eye separately, of course, weak minor eyes don’t give a full-fledged picture surrounding, but are capable to distinguish the smallest movements around. The retina of an eye has a unique structure by means of which the racer can correctly estimate distance to the victim or danger.

The spider jumper on a photo often seems lovely surprising creature of the average size for an insect, however it is possible to take such picture only with repeated increase, after all the size of a racer doesn’t exceed the size of a cheap coin.

Depending on a look both color and a color of individuals differs. Representatives of separate types resemble superficially ants more or little bugs, can also resemble scorpions remotely. 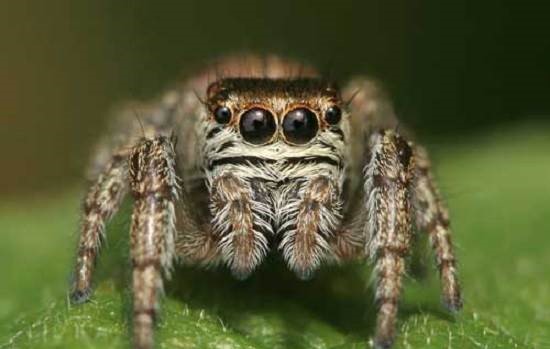 Body structure quite simple — the head and a breast joint, are divided only by small cross deepening. A forward half of a body is raised rather back above, in length it is more, than in width, sides cool.

The spider jumper in Russia the conceived is used as the great hospital attendant of a garden and kitchen garden. Of course, it is quite difficult to catch and not to do harm to these kids, however, if it is good to try, it is possible to catch some individuals and to seat on fruit-trees or beds.

Having appeared on a new place spiders will begin active hunting for small wreckers, thereby considerably will reduce need to apply on a kitchen garden chemicals to persecution of insects.

The spider jumper isn’t dangerous to the person at all, it is possible to take it directly barehanded, is only the accuratest not to do much harm. And, harmless to the person it is not due to the lack of poison, the spider jumper is poisonous, but skin doesn’t give in to his stings, besides, the person is too great that the kid could estimate it as something demanding aggression or even attention.

It is necessary to look for a spider in well lit, the places which are warmed up by the sun. Having caught the movement of the person the spider continuously watches it, moving sharp-sighted eyes, but doesn’t hurry to find shelter. 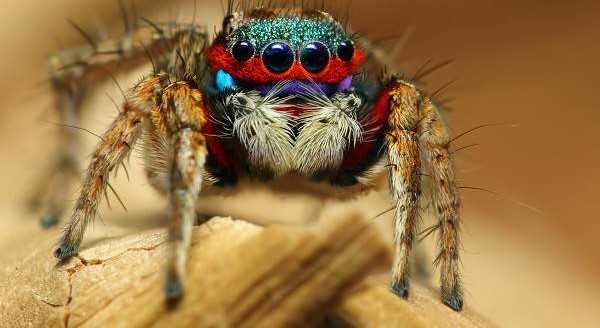 To buy a spider jumper quite simply in specialized pet-shops, this popularity by a bright color, absolute harmlessness for the person and ability of a spider with ease to adapt to life in bondage is caused.

Character and way of life of a spider of a jumper

The racer only hunts in the afternoon, and is the extremely active. Besides phenomenal sight the spider possesses one more useful ability — internal hydraulic system.

Extremities of a racer can change in sizes — to increase or decrease because of change of pressure of liquid in them, thus spiders jump on distances which, apparently, with their size can’t be overcome in one second. However, for secure the racer fixes a silk thread into place from which wants to jump off.

Extremities of a racer are supplied with small hairs and even claws that gives him the chance, in difference from other spiders, with ease to move on horizontally located glass.

Except secure the racer uses a silk thread only for construction of a nest for a laying — he doesn’t spin a web. The soil, a wall or the steep rock, trees or a grass can be a constant habitat of a little spider. 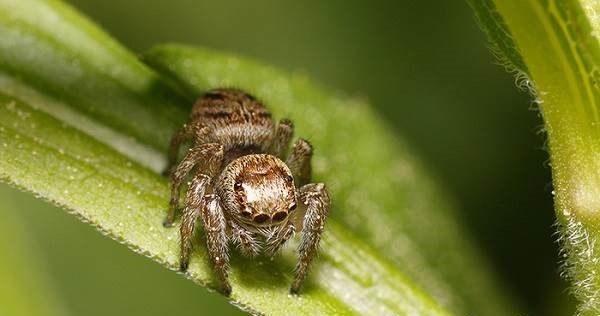 Food of a spider of a jumper

Hunting consists in a podstereganiye of production and its capture from quite long distance. The family also received the name «jumper» for a way of getting of food. Ability to jump on long distances, sharp-sighted sight and a habit to insure itself a thread of silk allow representatives of a look to get to itself food without weaving of a web. In food it can be unpretentious any insect, main — that the amount of production allowed a spider to cope with it.

Reproduction and life expectancy of a spider of a jumper

Males differ from females in a color of forward pair of extremities on which strips are located. Practically the marriage ceremony has each appearance, but the general for all is dance of a spider jumper with which the male draws attention of the darling.

The male raises forward extremities and definitely with accurate frequency slightly hits with them himself in a body. However, at once after pairing destiny of the future will teach remains completely in paws of a female. It builds a nest, carefully covering all surfaces silk.

The nest can settle down in any suitable secluded place — under a stone or fallen leaves, under leaves on a surface of plants. After a laying the female protects a nest, there will be yet no kids who after several molts reach the size of an adult individual and can care of themselves.

Argiopa spider. Way of life and habitat of an argiopa