For anybody not a secret that breed pigs not for the sake of a beautiful attractive face, and for the sake of meat. To close to it eyes silly, such is our cruel imperfect world. Annually the mankind consumes about 3 billion tons of pork. 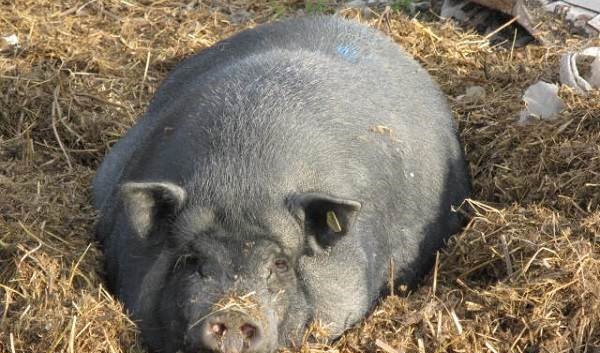 As they say, demand gives rise to the offer, and many breeders asked a question of removal of breed of pigs which would possess big productivity, high quality of meat still for a long time and was easy in leaving. Today among cattle breeders of many countries of Europe and America gains popularity the Vietnamese breed of pigs, and not for nothing.

Features and description of the Vietnamese pig

As the homeland of these artiodactyl consider Southeast Asia, and here they got to the European countries and Canada from Vietnam, from here and the name – the Vietnamese vislobryukhy pig went. There was it rather recently – in 1985, but thanks to the numerous advantages, these pigs quickly won hearts of many farmers worldwide. 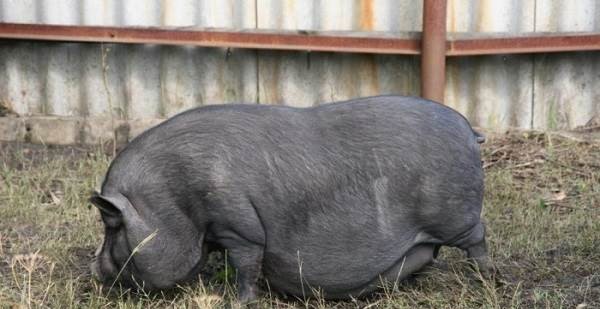 On a photo of the Vietnamese pigs you won’t confuse with one other breed: they have slightly flat muzzles with small standing ears, short stocky extremities, a wide thorax and the stomach sagging practically to a floor. At the sight of these animals at once it becomes clear, for what them call vislobryukhy.

Coloring of pigs mainly black, some copies have light spots. The Vietnamese white pig of pure blood (not the metis) – a big rarity. On a body male pigs have characteristic shchetinka.

Bristle length on a nape can reach 20 cm and it is possible to determine mood of an animal by its situation: for fear and for pleasure this peculiar mohawk bristles. 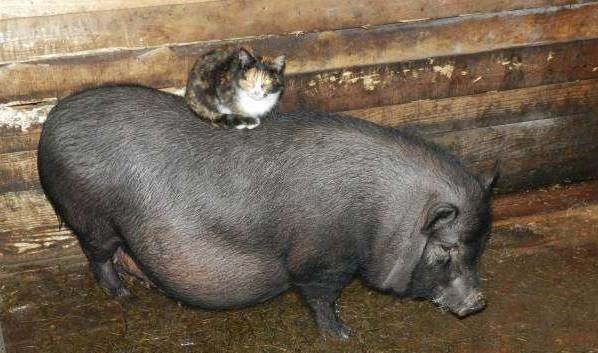 At the young boars who reached polovozrely age canines which by 3 years grow to 15 cm start being cut through. The weight of the Vietnamese pig fluctuates in the range of 70-80 kg, however adult breeding males can weigh and 150 kg.

Cultivation of the Vietnamese pigs

Natives of Vietnam have a number of indisputable advantages before ordinary white pigs. Females the vislobryukhikh of pigs are capable to conception at the age of 4 months. Considering that to their owners it is important not only quality, but also quantity, is very good indicator. Male pigs ripen slightly later – in 6 months.

But you shouldn’t hurry in a question of pairing. It will be difficult for young pig who weighs less than 30 kg to take out posterity. The issue, most likely, will be small, and health of mummy can overstrain. 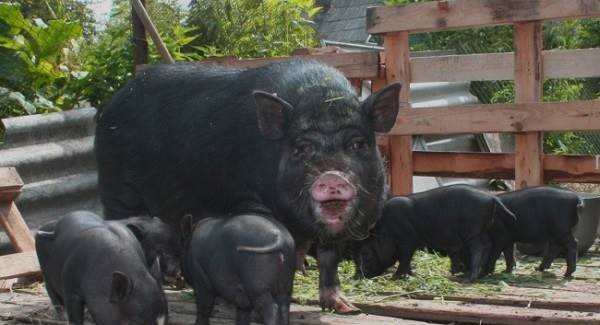 Golden rule of any cattle breeder – not to couple individuals from one dung to avoid genetic mutations. If pigs are got in cultivation, breeding animals for these purposes it is better to buy in different farms.

The farrow of the Vietnamese pigs occurs about 2 times a year. Pregnancy lasts on average 115-120 days then is born from 3 to 18 pigs. Many owners don’t interfere neither with process of childbirth, nor with the subsequent processing of newborn babies. Others – opposite, are with a sow during this difficult period (3-5 hours), cut off an umbilical cord and make all necessary manipulations.

Pigs of the Vietnamese pigs are born with the low level of nutrients therefore they as soon as possible need to start feeding on maternal colostrum. If it doesn’t occur in the first hour after the birth, they can be lost.

At females of the Vietnamese pigs the maternal instinct is well developed, they care of posterity, but don’t interfere with intervention of the person when it is necessary to examine a pig, to weigh or do vaccination. Meat of the Vietnamese pig well is on sale, and many do on it quite good money.

According to the estimates of one of farmers, in 15 sows within a year it is possible to receive from economy about 300 pigs.

Knowing the prices of meat production, it is possible to assume that the revenue of such enterprise will make about 3 million rubles. Considering all expenses connected with the contents and feeding of such herd, originally invested money will pay off for the 3rd year.

Leaving and maintenance of the Vietnamese pigs

Cultivation of the Vietnamese pigs doesn’t cause difficulties even in the beginning farmers. These animals well adapt to new conditions and seldom are ill.

The Vietnamese pigs in house conditions behave more than decently: in a pigsty they accurately divide the vacation spot and a dream and a toilet place, it considerably facilitates cleaning in a stall. The room of a pigsty usually is under construction of a brick or foam concrete blocks, the floor is filled in with concrete. More than a half of a floor of one stall cover with a wooden flooring – there pigs sleep.

The Vietnamese pigs in the winter, what hardy they wouldn’t be, have to contain in heat, especially it concerns just farrowed sows and their posterity. For this purpose the room is supplied with the furnace or carry out gas heating. 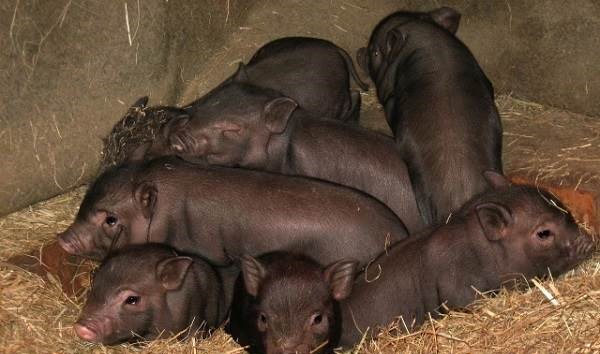 On a photo Vietnamese pigs

Feeding of the Vietnamese pigs differs from the usual a little. Quite often these animals are called herbivorous pigs for their addiction to vegetable food.

But it isn’t necessary to perceive it too literally: on one grass and a pasture they, of course, won’t starve to death, but also the desirable additional weight won’t be.

The structure of a digestive tract of Vietnamese has some features. The stomach in comparison with other pigs, at them is less, and intestines – are thinner. Digestion of food happens quicker, the metabolism is higher.

Because of it vislobryukhy pigs eat often and small portions. This breed of pigs difficult digests rough cellulose therefore such products as the turnip doesn’t suit them.

Besides a grass (the clover and a lucerne is best of all) pigs are given grain crops: wheat, barley, corn, oats, bean. It is better to make mixes independently, than to use purchased as it considerably saves money. 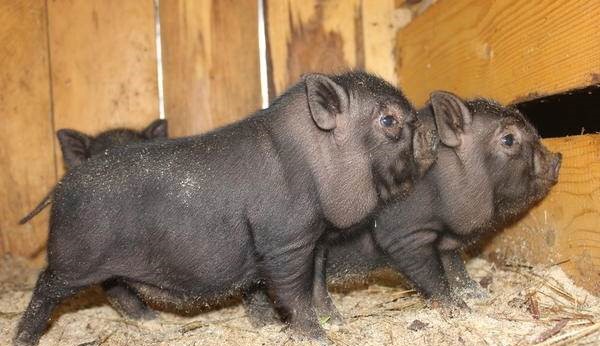 Add a little salt to small ground grains, trouble cool boiled water at the rate of 1:2 and leave for 12 hours. Just before feeding a small amount of cod-liver oil and vitamins is added. Pigs willingly eat apples, pumpkin, vegetable marrows, carrot, potatoes. In a diet add soft hay to the winter period.

For full development and rapid growth the Vietnamese pigs need to provide walking. Stay in the fresh air favorably influences appetite and health of animals in general. The place for walking has to be protected with a reliable fence. The area of the shelter has to be rather big: allocate for one adult animal about an earth hundred part.

In the vygulny territory equip a canopy that pigs could hide from the scorching sun. In addition it is necessary врыть to the earth for steam of thick columns about which Khryusha will scratch. And existence of a big pool of dirt will bring pets into indescribable delight at all. 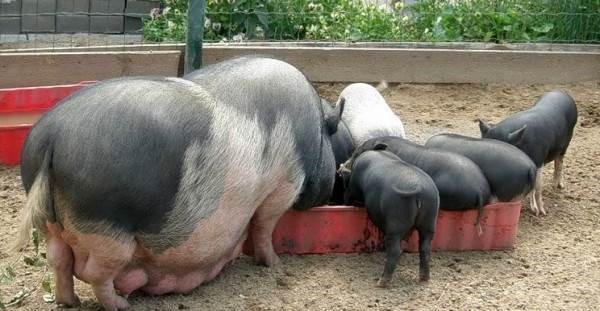 It should be noted that pigs, contrary to ordinary opinion, are very clean, and in dirt roll to get rid of importunate insects and to cool a body during a heat. Also elephants and many other animals arrive.

But not such especially positive these Vietnamese pigs: responses of many owners characterize them as great navvies. The requirement to dig at them is put genetically so to fight against it is useless.

Price of the Vietnamese pig and responses of owners

If the soul lit up purchase of the Vietnamese pig, the prices of them will please. The pig of 3-5 months from a sort can be got for only 3000-5000 rubles. At a choice it is necessary to pay attention to an exterior of the kid – from early age at this breed the drooped belly and the muzzle reminding a pug is well distinguishable. 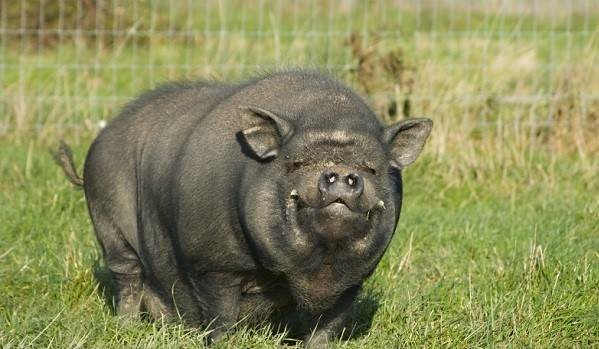 Dairy pigs – are even cheaper (1000-2000 rubles). Their fate not enviably: such are bought for the sake of gentle dietary meat. This product is considered delicious as possesses excellent tastes, contains not enough cholesterol and has no fatty layers.

Owners of livestock farms on cultivation of the Vietnamese pigs meet in one – to support them doesn’t make special work. However without due leaving and sufficient attention to the wards hardly something from this will turn out good.

About the Vietnamese pigs to buy which in our country it is simple, responses mostly positive. They proved as good-natured and appeasable animals. The young growth isn’t afraid of the person at all: pigs can play long, like puppies. 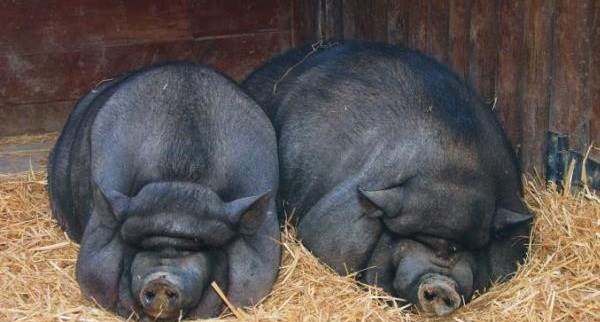 Many owners note also attachment of this species of a pig to the owner. If from infantile age to accustom a pig to hands, he will ask that it was scratched.

Adult pylons quite often go «tail» for the owner, as many dogs and cats. The Vietnamese pigs – very clever animals. According to scientific researches we will compare their intelligence mental abilities of the 3-year-old child.