It differs from kites in the habit of building nests in forests and on rocks. Representatives of a related species occupy single standing trees. It differs from a falcon in its focus on prey not only in the air, but also on the ground. 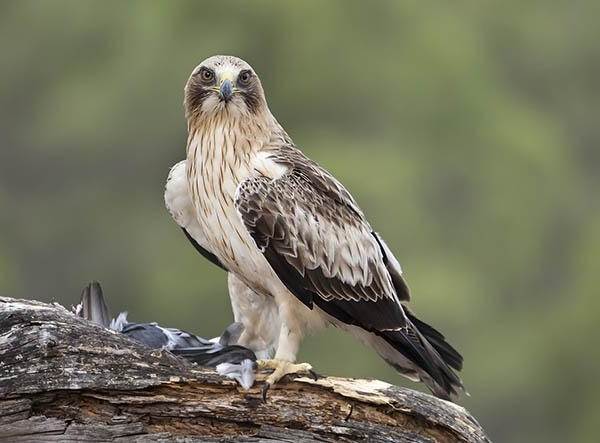 Among the hawks, it is distinguished by a shortened tail and long, pointed wings. The bird is separated from the eagles by paws that are feathered to the very fingers and narrow instead of the wedge-shaped form of the tail. Speech about the eagle dwarf.

Its name reflects the difference from other eagles. In its form, the bird is the smallest. The length of the body does not exceed 63 centimeters, and the weight of 993 grams. The usual parameters: 48 centimeters and 648 grams. 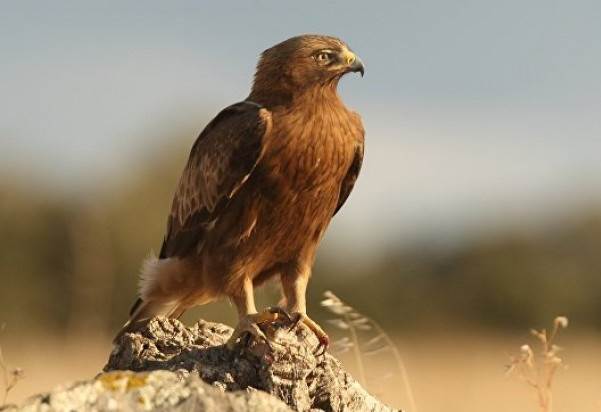 Aquila pennata looks out for prey

Description and features of the dwarf eagle 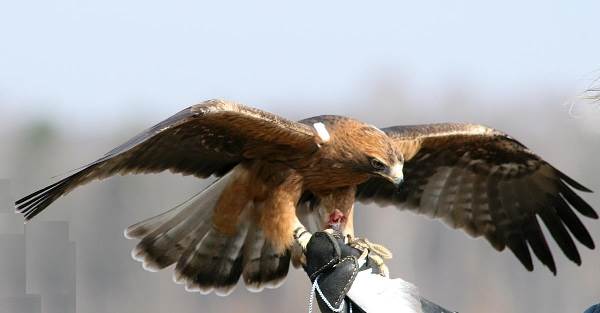 Dwarf torso stocky and sturdy. Like other eagles, the hero of the article has a large head. Its relation to the body gives rise to associations about the braininess of the animal. Dwarfs are really smart, easy to learn, can be used for hunting.

Listen to the voice of the dwarf eagle

Among the eagles, the hero of the article is the most curious and trustful. This is one of the reasons why birds are included in the list of red book animals. In Russia, the dwarf eagle population is on the verge of extinction. This is the result of a campaign to destroy predators. 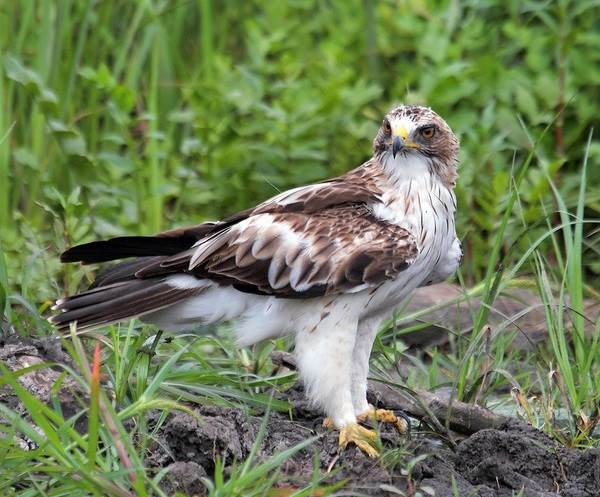 Like other eagles, dwarfs attributed attacks on chickens, rabbits. Although the hero of the article makes raids on his households less often than his other relatives, the hunters came to the field of vision more often. The reason for this is gullibility. Birds flew up to people more out of curiosity than those persecuted by hunger. That turned out to be a dwarf eagle in the Red Book.

Unlike many eagles, a dwarf cannot be found roaming the land. Most of the time the bird spends in the air. The eagles, for example, often look for carrion on the ground.

The dwarf, if swoops down, immediately flies back with the prey in its paws. They can get rodents, snakes. However, the main ration of the hero of the article is small birds that he catches on the fly. 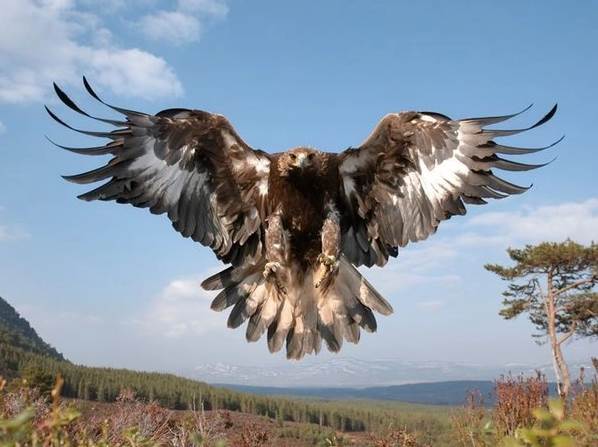 If the dwarf is not in the air, he is probably on a tree. Sitting on top, the predator waits, looks out for victims. The cry of the feathered when diving towards them is higher than that of most eagles. In addition, the dwarf is able to make melodious sounds, like a sandpiper.

On the fly, the eagle dwarf also spends the offseason. Bird migratory. For the winter, the main population rushes to the Middle East and Africa. The dwarf nests in the Caucasus, in Transbaikalia and Altai Territory, in the suburbs of Tambov and Tula. 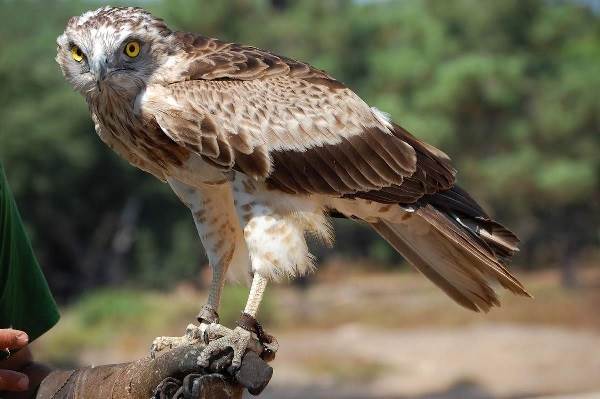 Outside Russia, the hero of the article breeds in France, Libya, Sudan, Greece, and Turkey. There is a bird in Egypt. Several colonies inhabit Australia. Dwarfs everywhere look for deciduous forests. They have a lot of light that pleases representatives of the species. Coniferous arrays miniature eagles rarely inhabit.

The eagle dwarf in the photo appears in the dark, or light plumage. The first has a brown upper body. Breast and belly of ocher tone. It is interspersed with dark spots. Evenly light only the tail of the bird. 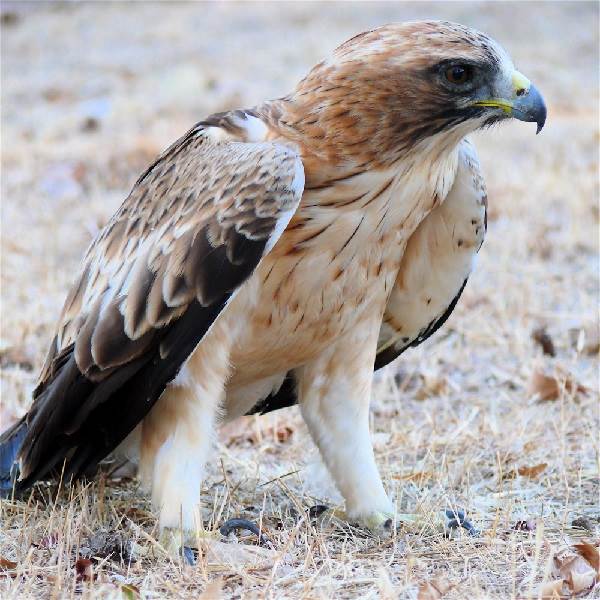 The plumage of a light dwarf is brown on top, the bottom color is creme brulee. The tail of the bird is a couple of tones lighter than that of the representatives of the first species of feathery.

In theory, the prey of the hero can be any animal no larger than a rabbit. Among the birds, larks, turtle doves, corncrakes, blackbirds, sparrows and starlings fit the description. Their nests are also under the «scope». Eagle dwarf is not averse to profit by eggs.

From reptiles, the hero of the article catches lizards and snakes. The latter are poisonous. So that the snake did not have time to bite, the eagle grabs it with claws and delivers a fatal blow to the head with its beak. 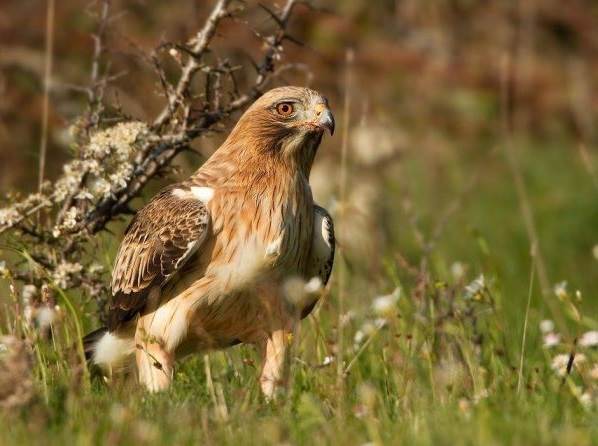 Birds that do not have time to immobilize the victim before the bite die from poison. From mammals the dwarf hunts on mice, hares, gophers and rats. From insects can catch anyone on the fly, but rarely does it. Exceptions are termites.

They are included in the winter menu of the eagle, occupying about 20% of the total number eaten. Tracking down the victims, the eagle keeps at a height of 15-20 meters. Rising higher, the dwarf may not notice prey.

Dwarfs prefer nesting on tall oaks. Of the deciduous trees in mini-eagles is the most favorite. If there is no dense forest, birds choose small clusters of high trunks among the mountains, steppes. 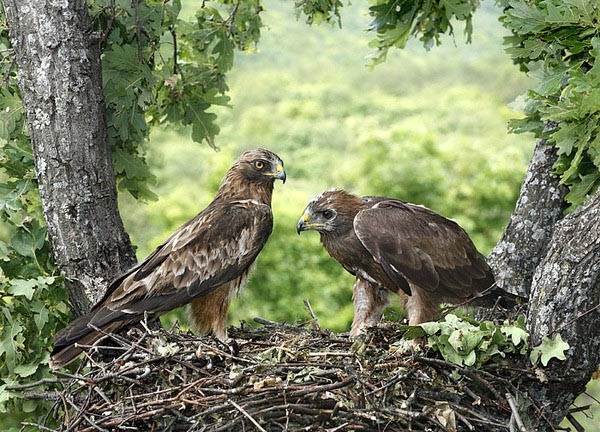 Nest equip at the fork of trunks, lifting from the ground at 7-20 meters. The depth of the bowl is about 15 centimeters. The diameter of the nest reaches a meter.

They build a nest of branches and sticks, lined with leaves and dry herbs. Both male and female work. Couples eagles dwarfs create times for life, flying together to warm countries and returning home together. Both parents incubate and feed the chicks.

The description of the eagle of a dwarf and its lifestyle rarely includes mention of 1 or 3 eggs. Standard masonry consists of two. They hatch in 40 days. Newborns are covered with yellow down like chickens. 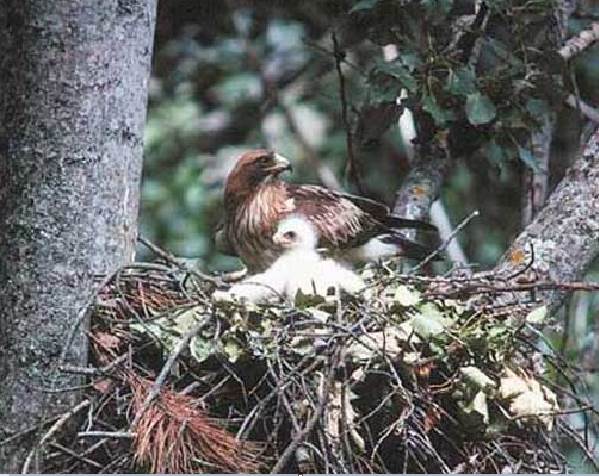 Chicks eagle dwarf merzlyaki. The first week of the offspring of the female remains with them in the nest, warming. Father feeds mother and children.

On the wing of the chicks stand in early August. By this time the birds are already about 2 months old. Another month, the chicks remain with their parents. With the onset of autumn, young eagles gather in flocks, heading south with their annuals.

Juveniles fly away a couple of weeks earlier than their parents, as they overcome the path longer. With favorable circumstances, the age of the eagle is not at all dwarfed — about 25 years. In zoos, birds live all 30-33.