There is an interesting bird in the gull family, which has been growing in Europe, Asia and Canada in recent years. She, if you compare it with other seagulls of small size, elegant and friendly. This interesting bird is called the black-headed gull. 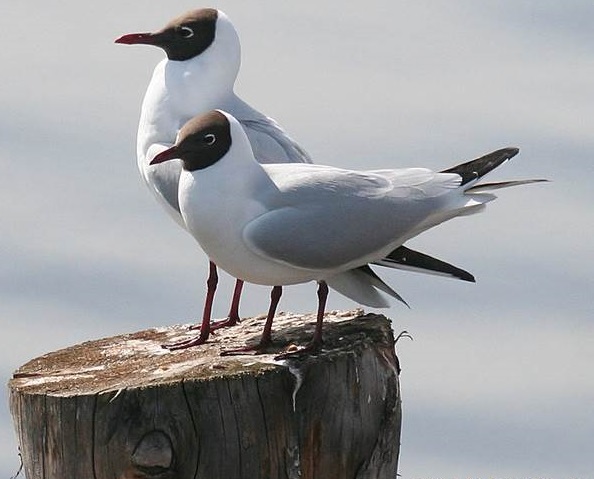 Features and habitats of black-headed gulls

This bird is nesting, migratory, migratory, and hibernating in small numbers. The size of a black-headed gull bird, like that of a large pigeon. The average length of a male reaches up to 43 cm, the female is always smaller — 40 cm.

The wings of both sexes in scope reach up to 100 cm. In the description of the black-headed gull there is a distinctive feature from all other birds — its mating outfit. The entire head of the bird is colored brown-brown, while the main plumage is white.

Only on the back and on the top of the gull’s wings are gray shades with black feathers visible. Young black-headed gulls differ somewhat from adult individuals in the color of their feathers. They are dominated by gray, brown and gray tone.

The birds’ beak has a rich cherry color, the same color as their paws. The edges of their eyelids are also painted red. If you look at a photo of a black-headed gull, it is difficult to hold back your smile.

A cute creature with a brown mask on the face and head immediately attracts sympathy. Habitat habitat rather big. It can be found throughout Eurasia, even in its colder regions. It has long been observed by people in Norway and Iceland. 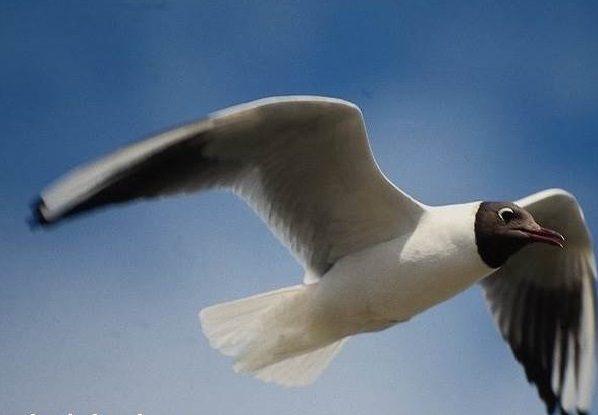 About 100 years ago, people concluded that black-headed gulls are harmful to fish catch. They began to shoot and destroy eggs. Since then, their numbers have recovered slightly. But the popularity of their eggs among people does not decrease.

Eggs are collected for sale, eaten. It is usually customary to collect from the nests those eggs in which there are only two. If there are more eggs, then they are already hatching in that nest. The black-headed gull builds its nest mainly along meadows and lakes, on their coastal vegetation. You can meet them in the lagoons and salt marshes. There is no definite answer to the question where river gulls winter.

As soon as the cold approaches, they begin to move to warmer climes. Some of them choose the coast of the Black and Caspian Seas for wintering, others fly to the Mediterranean regions, to Asia, to the Kola Peninsula, to the Persian Gulf.

Character and way of life of the black-headed gull

The middle lane is filled with black-headed gulls from the beginning of April. Pair of birds form during the flight. Some manage to do this already during nesting, on arrival. Gnezdovye colonies have a variety of parameters.

On average, a small area is allocated for one nest, within a radius of 35-45 cm around the bird’s abode. In those places where the increased humidity of the birds’ nests is massive and strong, they stretch to a height of 40 cm. In general, the nests of black-headed gulls are carelessly made of coarse material. 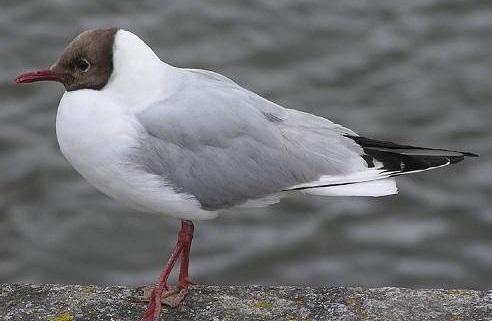 The black-headed gulls show their activity throughout the day. Their peaks fall in the morning and evening. Throughout the year, the bird leads an active social life. For their location, bird colonies choose hard-to-reach places. Where nesting takes place there is always a lot of noise and screams emitted by black-headed gulls. An increase in colonies occurs with the arrival of its new inhabitants.

There are nomadic flocks of birds that migrate from place to place throughout April and all subsequent time in search of food. Western Europe is the richest place for these birds, sometimes there are up to 100 pairs in one colony.

In recent years, black-headed gulls have been seen more than once in city food dumps. Especially quickly they can find fish processing plants and settle close to them. The black-headed gull is a very noisy and noisy bird. The sounds she produces are popularly called the gull laughter.

In the diet of these birds feeding a large variety of different feeds. But more preference is given to food of animal origin. They are happy to absorb terrestrial and aquatic insects, worms, crustaceans, mollusks and small fish. 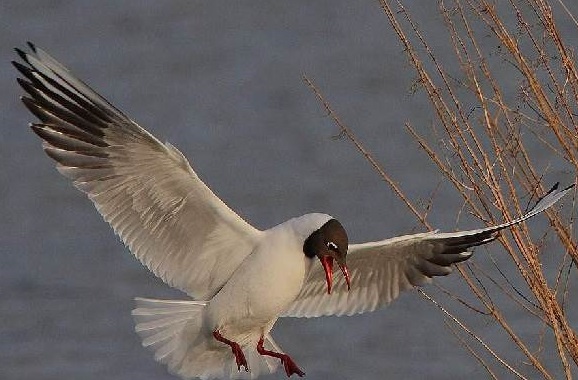 Sometimes, for a change, they can eat the seeds of plants, but this food is less to their taste. Do not disdain black-headed gulls and food waste found at a landfill. In order to catch a fish for itself, the bird does not fully submerge in water, but only partially dips its head into it. With amazing agility she can catch a grasshopper in a meadow.

Reproduction and life expectancy of the black-headed gull

River gulls become sexually mature at the age of one year. In females, this occurs a little earlier than in males. Birds are monogamous. Sometimes in order to form a constant pair with them, they have to change more than one partner.

After the flight, birds are busy searching for food and improving their homes. Far from the colonies do not fly away. This period they are the most noisy and hectic. Especially in the air, they behave loudly and defiantly, chasing each other and shouting only clear sounds to them.

One can notice the formation of a pair. During their first acquaintance, if the birds sympathize with each other, the female bends and directs its head towards the male, as if begging for food from him. The male feeds her with pleasure. 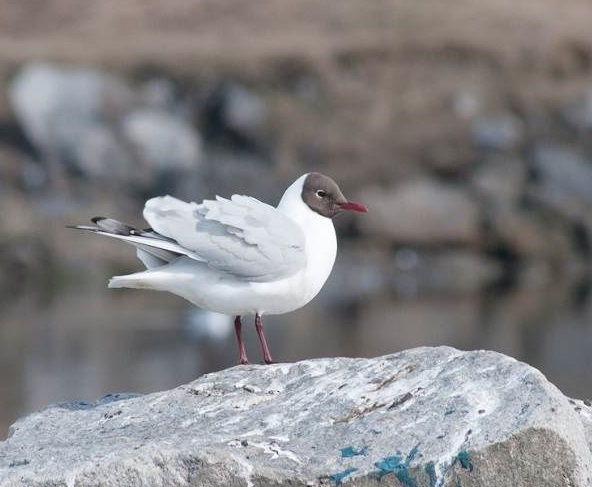 Couples build their nests in places that are difficult to visit for humans and predators. During laying, they lay mainly 3 eggs each. If the clutch for any reason disappears, the birds do it again. The color of eggs can be blue, dark brown or olive brown. Both parents are engaged in their brooding.

The appearance of an uninvited guest in the colony, accompanied by frantic shouts and general alarm. Birds rise with shouts to the sky and begin to frantically circle over a potential adversary, watering him with their droppings.

After 23-24 days, chicks are born, with ocher-brown and black-brown plumage. This color allows them to merge with nature and remain unnoticed by their enemies for a long time. Parents distribute all responsibilities in raising babies equally among themselves.

With great care, they feed them from beak to beak or throw food directly into the nest, from where the chicks are happy to pick it up on their own. Attempts to fly babies start from 25-30 days. The life span of black-headed gulls reaches up to 32 years.