Among the woodpeckers there is one of the largest and most fearful representatives of the European brethren, the green woodpecker striking the color of its plumage. 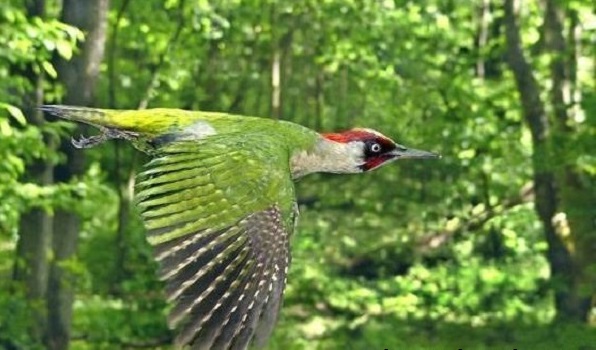 The fact that he is in the forest is evidenced by his loud singing and huge hollows in the trees, which the bird hollows out with its beak. In order for such hollows to be obtained, the beak must be strong enough and sharp.

In most cases the bird, a green woodpecker, loves to sing in the forest in springtime. We all have long known the sound of these birds. But few people know that with the help of this knock they communicate with each other. The sound of woodpeckers knocking during the mating season is increasing.

Listen to the voice of the green woodpecker

In order for the sounds to be clear and loud, woodpeckers strike with their strong beaks on the dry branches of trees. These beaks help birds to find food for themselves in winter, which is deep under the snow drifts. 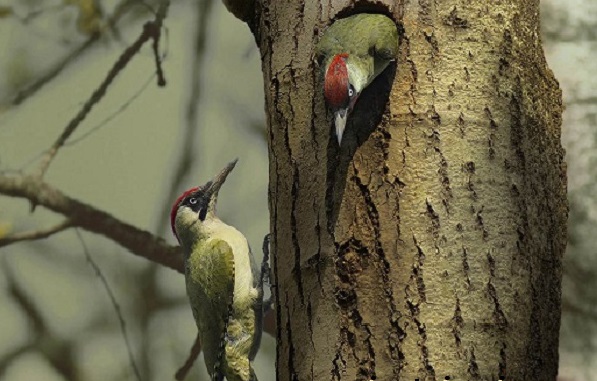 Peculiarities and habitat of green woodpecker

A distinctive feature of birds is the color of plumage, all in green tones. Their top is more olive, and the lower part of the body is light green. At the top of the head and on the back of the head, birds are struck by red feathers that resemble a hat.

The feathers in front around the beak and eyes are painted black. The bird’s beak is gray, and its mandible is yellow. The iris has a yellow-white color. On the spot under the beak are feathers resembling a mustache. 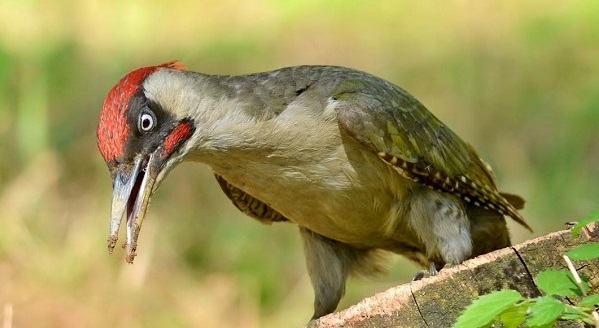 With the help of their color it is possible to distinguish the female green woodpecker from the male. In females the antennae are black, in males the black color is diluted with red. On the paws of the woodpecker are four fingers, two of which are directed forward and two back. They help keep the bird upright on a tree. The insurance is the tail of a green woodpecker, consisting of hard feathers.

In the photo the green woodpecker merges with the overall picture of the forest. Only his red cap stands out, which is full of and conspicuous. Only thanks to this hat the bird becomes noticeable in the green colors of the forest. 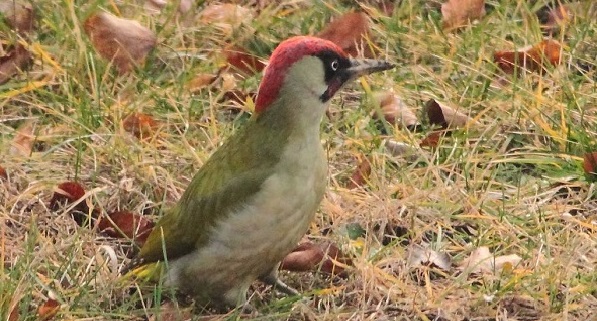 The West of the Eurasian continent, Northern Iran, the Transcaucasus, Turkey, Scandinavia, Scotland are the places where this bird can be found. There are they in Russia, Ukraine. Some islands of the Mediterranean, Macaronesia and Ireland are also favorite places of green woodpeckers.

These birds prefer to live in parks, gardens and deciduous forests. Coniferous and mixed forests are not exactly to their taste. Comfortable most green woodpeckers on the open landscape, in alders, oak forests bordering forest ravines.

Pereleski, forest edges and forest islands are places where these birds can also be found in frequent cases. The most important thing for a green woodpecker when nesting is the presence of large anthills, because ants are their Saami favorite treat. 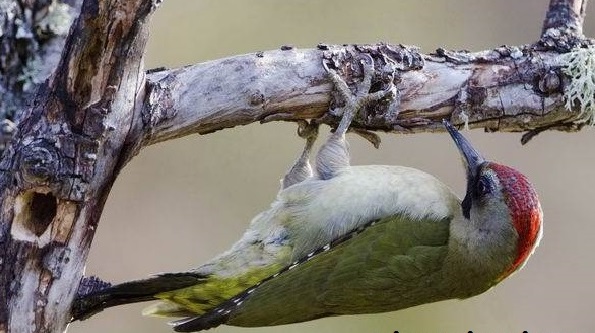 Green woodpeckers are most active in the mating season. It always falls on the beginning of the spring season. At this particular time, one can most often hear the voice of a green woodpecker, accompanied by its periodic cries and mating flights. This is a sedentary bird. If ever it can be forced to migrate, it is only for too short distances.

The nature and lifestyle of the green woodpecker

You can contemplate these birds throughout the year. He likes to sit on the tallest trees in the parks, but you can see him in the thickets of heather. In winter, green woodpeckers can move to open areas.

Not all the time these birds spend on the tree. In frequent cases, they sink to the ground in order to rummage in the forest floor and dig for food. In addition, they easily break apart rotten stumps and ruin large anthills, all with the same goal to find their own food. 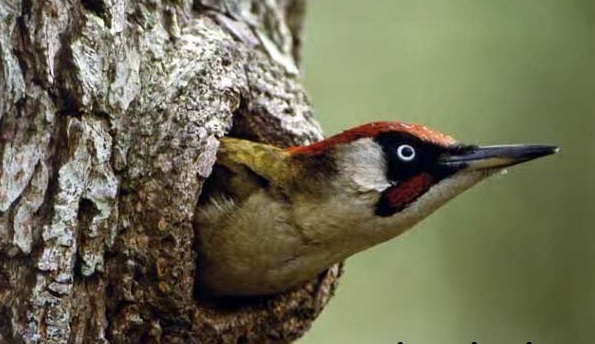 The bird is very timid and cautious, so it’s almost impossible to see near it. You can only hear, most often in the spring. They prefer to lead a hidden lifestyle, especially when babies are in the nest.

Green woodpeckers move with the help of jumps and flights. Green woodpeckers prefer to lead a single lifestyle. They form a couple only during the marriage period and the maturing of their offspring.

Birds make nests on old trees and live in them for a long time. If they have a desire to change their place of residence, then the new nest is located from the old one no more than 500 meters. 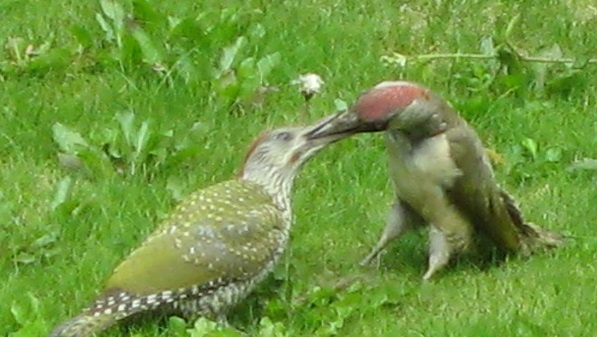 Usually it takes about a month to build a home for woodpeckers. The hollow of this bird can be seen at a height of 2 to 12 meters in willow, blue, poplar, birch and beech. Birds fly in waves, flapping their wings during takeoff.

As a result of the livelihoods of people who cut down forests and use pesticides, the number of these birds is sharply reduced, so the green woodpecker is listed in the Red Book.

In order to find food for themselves, green woodpeckers descend to the ground; this is how they differ significantly from their fellows. They adore ants and their pupae. 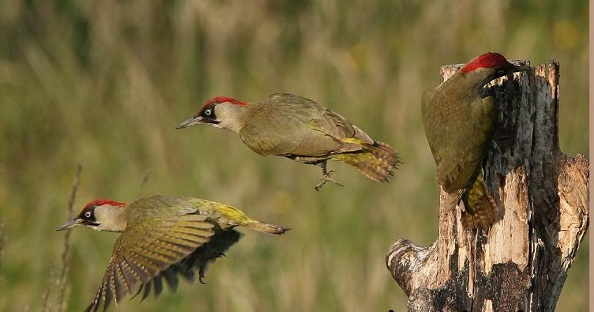 In order to extract this delicacy, they are helped by a huge and 10 cm long tongue, which has a high stickiness. In particular, they love red ants. In addition to ants, earthworms, various small bugs and larvae are used.

In winter, the green woodpecker pulls out its food from under the snow. If he doesn’t find anything, he doesn’t refuse to feast on berries, for example rowan. Sometimes a woodpecker can eat a snail and even a small reptile. It is interesting to observe how these birds hunt ants.

They in one place destroy an anthill and wait, when its disturbed tenants appear on the surface. As soon as they appear, a long bird’s tongue is used, with which they attract prey. After satiation, the bird is removed, but time passes and it returns to the same place again to repeat its meal. Green woodpeckers are lovers to eat a lot. 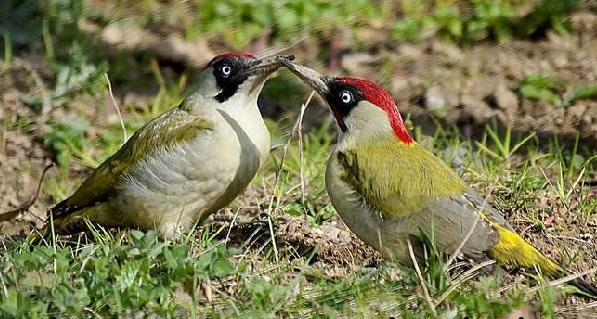 In order to feed their chicks, parents do not often appear at the nest. They accumulate food in the goiter, from which they gradually belch it to the babies. Therefore, in frequent cases, their nest seems absolutely non-residential.

It is interesting to observe these birds in the mating season, when their pairs are formed. With the arrival of spring in the forest you can hear the loud voice of a green woodpecker. Thus, they try to attract the attention of the females they like.

Singing occurs in March-April. The female who became interested in response, too, begins to sing their songs. During such a roll-call, the couple gradually flies toward rapprochement with each other. 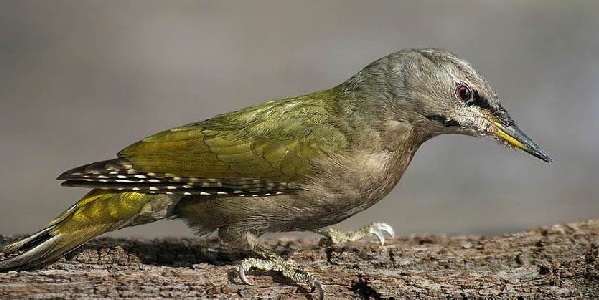 When they meet, they are located on a branch next to each other and begin to touch their beaks. From the side of such bird kisses look just amazing and romantic. All this suggests that a pair of birds formed. The next step for two lovers is to find a home for them and future babies. It happens that the birds are lucky and they do not find someone’s old abandoned nest.

If this does not happen, the male takes all the trouble on the family nest. Building a woodpecker nest with green plumage with great diligence. It takes a lot of time. Sometimes the female helps him in this, but with great reluctance.

It is amazing that with the help of his beak the male can hollow out a nest of 50 cm. Inside the dwelling of a green woodpecker is covered with a layer of dust. When the nest is ready in a pair of green woodpeckers comes a very important point — laying eggs. Usually there are from 5 to 7 pieces. They are white in color. 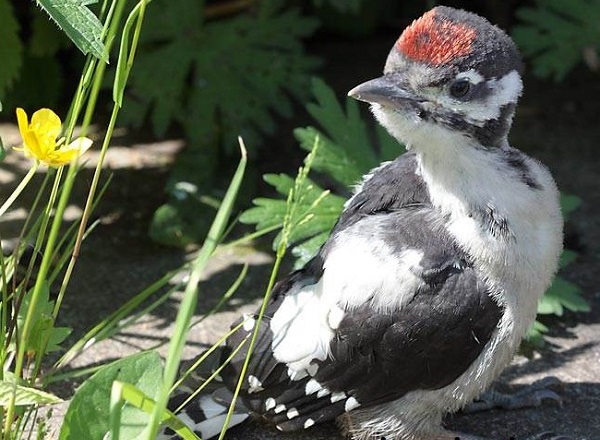 Both male and female are involved in breeding offspring. They change each other every two hours. After 14 days naked and helpless chicks are born. From the first minutes of their lives, they are hungry and in need of food.

The task of parents now includes feeding babies. This, too, is all done together. Parents take turns feeding their children, and children in turn grow very quickly.

After 2 weeks, the chicks independently go out of the nest, sit on a branch and examine a new world for themselves. At the same time, they are first on the wing and make the first very short flights. The young generation of green woodpeckers can be distinguished by pockmarked coloration in the neck and chest.

When the chicks are 25 days old, they leave the nest, but for a long time they are near their parents for about two months. After that, the family of green woodpeckers falls apart and each of them begins an independent, unrelated life, the average duration of which is about 7 years.