The smallest among the ducks. Teal is 3 times smaller than mallards. In length, the whistle does not exceed 38 centimeters. Usually the length of the body is 30 centimeters. The bird weighs no more than 450 grams. Females, as a rule, have a mass of about 250. 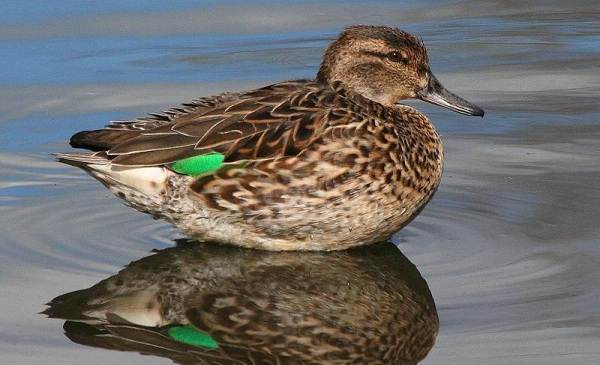 Description and features of the whistle

Teal whistle is named for the ability to whistle cleanly and loudly. However, this ability is allocated only drakes. Females nasal, quack muffled.

You can hear mini ducks from spring to autumn. In winter, whistlers go to Africa. There, ducks are found near spotted hyenas and secretary birds.

Listen to the voice of the teal whistle

In the wanderings teals are sent, taking almost vertical start. The ability to soar miniature ducks are obliged to narrow and pointed wings. They also provide an opportunity to land on any platform. Other ducks lack such abilities. 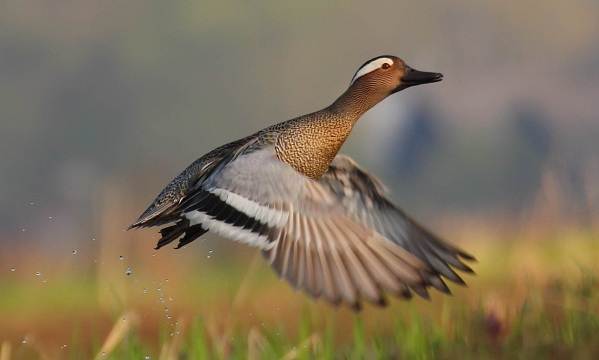 In the photo, the teal whistle often appears next to the mall. Species have similar habitats. Externally, teals differ not only in size, but also in emerald «mirrors» on the wings. The rest of the plumage is dark brown with a light abdomen. This is summer.

In the spring, preparing for reproduction, males are brightened. Feathers on the head become rich brown with iridescent green inserts around the eyes. Emerald fragments are edged with white. His stripes go to the beak. The body drakes in the spring gray, with mottled.

The voice of the teal whistle in Russia is heard with the advent of the first gaps. There are no special requirements for water bodies. Teals inhabit the steppe, forest lakes and rivers of the Tundra. Since the last birds removed for the winter, in September. Mini ducks fly away from the middle of the country at the end of October. 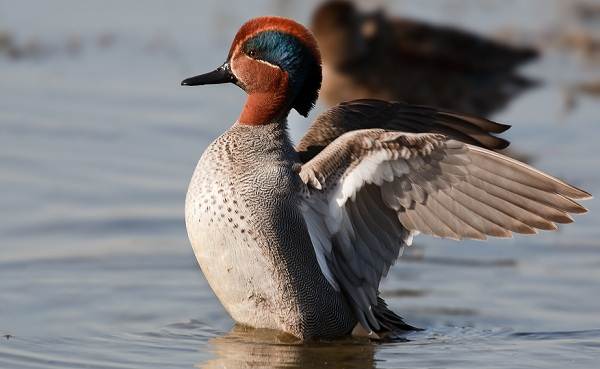 Choosing between a large and a small body of water, whistlers prefer the latter. If there are options in the forest and in the open, the latter will be discarded.

Reservoirs with rich surface vegetation are preferred by teal during the molting period. Birds lose almost all guard feathers at once. It interferes with flying. Having become vulnerable, teals want to hide in the reeds, coastal bushes.

In terms of high-altitude location duck settlements are not stable. In northern areas, teals prefer lowland plains. In the south of the country whistles love to inhabit the mountain plateaus. Here miniature ducks are to be found in the Caucasus, on the shores of the Caspian Sea, on the border with Mongolia. 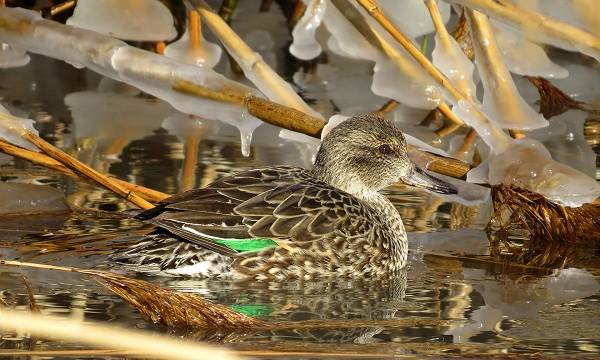 In the mountains, whistlers sometimes settle in Kamchatka. There the ducks stay to winter, moving to the hot springs. Near them is kept warm, the grass grows.

Ornithologists duck teal whistle related to the river, like mallard. The hero of the article is a type of feathered species. It includes teals. They are 20. On a par with the prosperous whistle there are species that are on the verge of extinction, for example, the marble one.

The last time this teal seen in the 1984th year. Perhaps the species died out like a Gogol duck. Remember the expression: — «Walk with gogol»? So in the 21st century, Gogols around the planet walk only in a figurative sense. Birds with a sonorous name extinct. 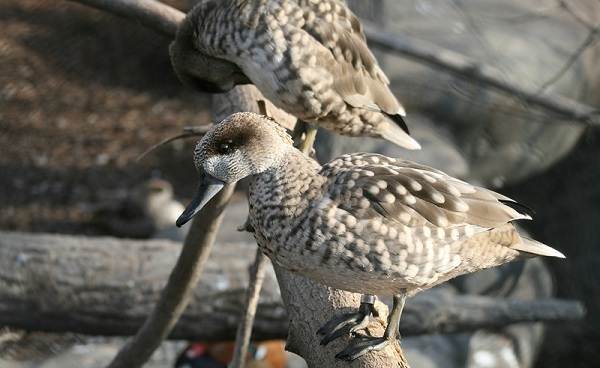 On the photo marble teal

There are also blue, gray, Madagascar, Auckland, brown, brown, Campbell and chestnut teal. For each of them there is an alternative name. In the national consciousness, this brings some confusion. The whistle, by the way, also has additional names: small, sexual, crackle.

Among the teals, the whistle is most loved by hunters and even by large-scale bird catching enterprises. In Europe, for example, the hero of the article is mined precisely on an industrial scale. Of the 100% mined meat, 70% are suitable for sale. These indicators can «boast» units of birds.

Individually, the hunters put a decoy on the teal whistle. More precisely, they put a decoy duck. Munk also emit a characteristic feathery sounds. They fly real birds. It remains to shoot them from ambush.

A teal whistle is a bird that extracts food in acrobatic poses. Feathered rises on the head. Over water dangling legs ducks. At this time, the head searches for food under water, seizing it with its beak. The whistle is drawing from the water the crumbs of vegetation, bread, grain, larvae thrown by people.

Enter into the diet and small crustaceans, worms, mollusks, insects. From plant foods, teal prefer duckweed, cereal seeds. The last whistles seek out on the banks of reservoirs. Such “fishing” birds are engaged in the cold. In the summer, while animal food abounds, teal prefer it. 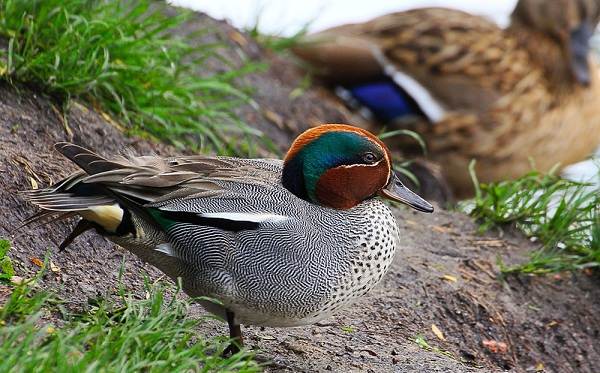 Mini duck reaches puberty by the age of one. Teal whistle female and male are joined in a pair upon arrival at the nesting sites, or even in Africa. Ornithologists are ironic that during the wintering duets are created out of love, and in Russia out of necessity. Otherwise, how to explain that some pairs are formed in advance, long before the breeding season?

Wedding games are held on the water. The drake circles near the female, lowering the beak into the water. The head is pressed against the breast. After the drake throws back its beak up, spreading its wings. Splashes rise in the air. The dance algorithm is repeated.

The movements of the drake are accompanied by a famous whistle. A duck with a partner sharply bites invisible enemies behind his shoulders, now to the right, then to the left. 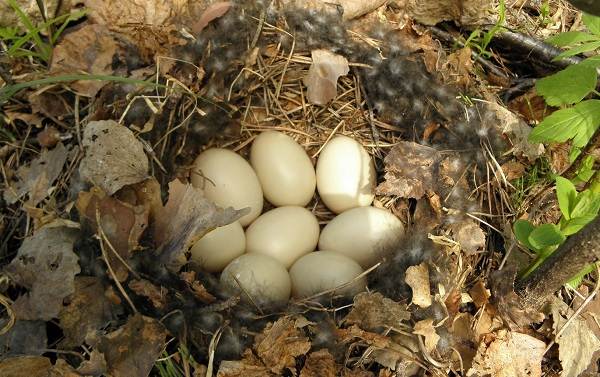 After mating, 5-16 eggs are laid in prepared nests. The fecundity of whistlers is one of the factors of their prevalence and multiplicity.

The nest is built by a female. In the course are twigs, dry leaves and grass. Above them are lined with down of mother. On its brownish background, beige eggs are disguised.

Hatching progeny mother. Drake flies to molt. From each 5mm egg on the 22nd-30th day of development, a teal will hatch. The minimum period is typical for hot years, and the maximum for cold ones. 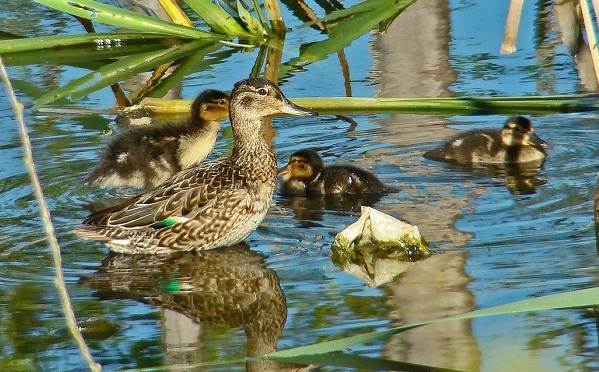 From the nest hidden in the vegetation, the ducklings emerge already in the first days of life. Mother teaches offspring to swim and get food.

If the teal does not die in the hands of predators and does not succumb to diseases, it will live 13-16 years. In captivity, miniature ducks can reach 30 years.