Features and habitat of the Komodo monitor lizard

The Komodo lizard is also called the giant Indonesian monitor lizard, because it is the largest lizard on earth. Its dimensions are impressive, because often such a lizard can grow more than 3 meters in length, and weigh over 80 kg. Komodsky monitor lizard 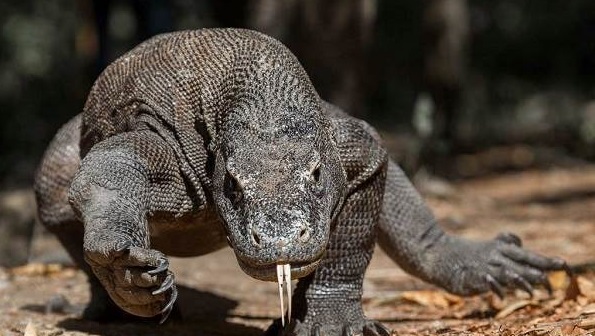 Interestingly, in captivity monitor lizards are larger than in the wild. For example, one such representative lived in the St. Louis Louis Zoo, whose weight was 166 kg at all, and its length was 313 cm.

Many scientists believe that in Australia (and monitor lizards occurred there) animals tend to have gigantic proportions. In addition, megalania — a relative of monitor lizards, which is already extinct, was much larger. He reached a length of 7 meters, and weighed about 700 kg. 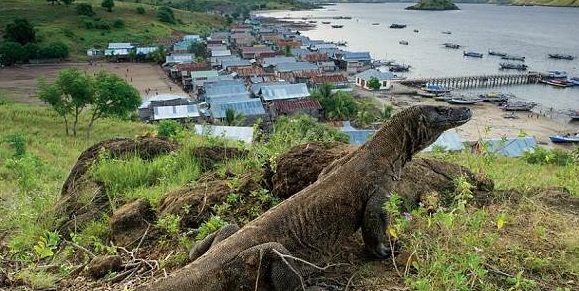 But different scientists have different opinions, and it remains obvious that the Komodo lizard has impressive dimensions, and this does not please all of its neighbors, because it is also a predator.

However, due to the fact that large hoofed animals are increasingly exterminated by poachers, the monitor lizard has to look for smaller prey, and this has a depressing effect on its size.

Already, the average representative of these animals has a length and weight much less than that of its relatives only 10 years ago. The habitat of these reptiles is not too wide, they have chosen the island of Indonesia.

The nature and lifestyle of the Komodo lizard

Komodo lizard is not too respectful of the society of their relatives, he prefer a solitary lifestyle. True, they also have times when such loneliness is broken. Basically, this happens during the breeding season or during feeding, then these animals can gather in groups.

It happens that there is a big dead carcass, from which the smell of carrion comes. And monitor lizards are too developed sense of smell. And on this carcass quite impressive group of these lizards gathers. But more often, monitor lizards hunt alone, as a rule, during the day, and at night they hide in shelters. For shelter, they build themselves burrows.

Such a hole can be up to 5 meters long, monitor lizards tear it out with claws. And young people can easily hide in a hollow tree. But the animal does not strictly follow these rules.

He can walk through his territory at night in search of prey. He does not love the active heat too much, so he prefers to be in the shadow at this time. The Komodo monitor lizard feels most comfortable on dry terrain, especially if it is a small hill that is easily visible.

In hot periods, prefers to wander near rivers, looking for carrion that has been thrown onto the shore. It is easy to enter the water, because he is an excellent swimmer. It is not difficult for him to overcome a fairly substantial distance in water.

But do not think that this bulky lizard can only be agile in the water. On land, in pursuit of prey, this clumsy beast can reach speeds of up to 20 km / hour. 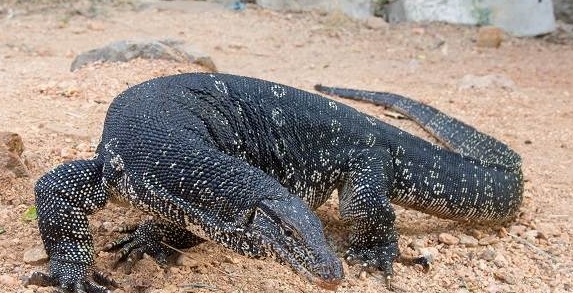 It is very interesting to watch the Komodo monitor in the video — there are videos, where you can see how he gets food from the tree — he gets on his hind legs, and uses his strong tail as a reliable support.

Adults and heavy individuals do not like to climb trees too much, but they don’t really succeed in it, but young monitors, not burdened with large weights, climb trees very well. And even love to spend time on curved trunks and branches. Such a powerful, dexterous and big beast has no enemies in nature.

True, the lizards themselves are not averse to dine a weaker relative. Especially during periods when it is too heavy with food, the monitor lizards easily attack their smaller brethren, grab them and shake them violently, breaking the spine. Large victims (wild boars, buffaloes) sometimes fight very desperately for their lives, causing serious injury to the monitor lizards. 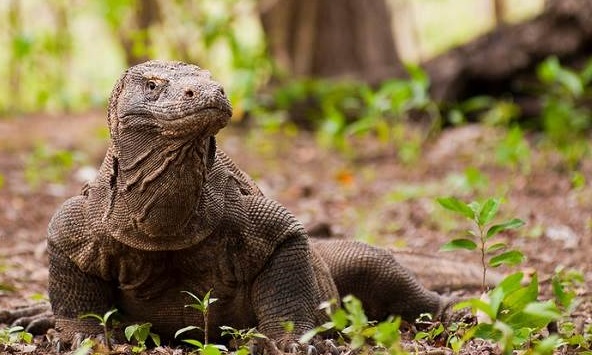 And since this lizard prefers large prey, more than one scar can be counted on the body of adult monitor lizards. But animals reach such invulnerability only by the adult period of life. And small monitor lizards can be prey for dogs, snakes, birds and other predators.

The diet of the monitor lizard is varied. While the lizard is still in its infancy, it can even eat insects. But with the growth of an individual, its prey increases in weight. Until the Cocktail has reached a weight of 10 kg, it eats small animals, sometimes climbing behind them to the tops of the trees.

True, such «kids» can easily attack the game, which weighs almost 50 kg. But after the monitor lizard has gained weight more than 20 kg, only large animals make up its diet. Deer and wild boar monitors waiting at the watering or near forest trails. Seeing the prey, the predator attacks, trying to knock the victim down with a tail blow. 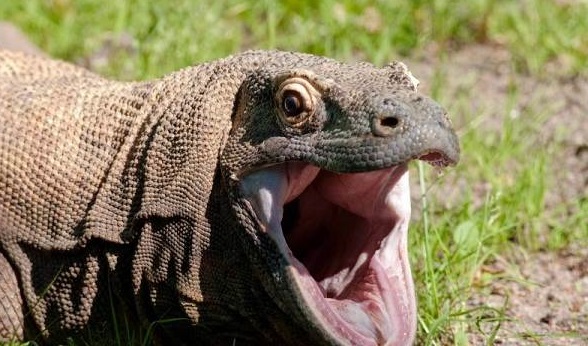 Often, such a blow immediately breaks his legs unhappy. But more often, the monitor lizard tries to eat the tendon on its legs. And already when the immobilized victim cannot escape, he tears the still living animal into large pieces, pulling them out of the neck or abdomen. Not especially large beast, the monitor lizard eats entirely (for example, a goat). If the victim did not immediately give up, the monitor lizard will still overtake her, guided by the smell of blood.

Varan is greedy. At one reception, he easily eats meat about 60 kg, if he weighs 80. According to eyewitnesses, one not too large female Komodo lizard (weighing 42 kg) for 17 minutes was finished with a boar of 30 kg.

It is clear that from such a cruel, insatiable predator is better to stay away. Therefore, from the areas where the monitor lizards settle, reticulated pythons disappear, for example, which in hunting qualities simply cannot be compared with this beast.

Varanes become sexually mature only in the 10th year of life. In addition, females of all monitor lizards are only slightly more than 20%, so the struggle for them is serious. Only the strongest and healthiest individuals come to mating.

After mating, the female finds a place for laying, especially her attracted to compost heaps, which are the natural incubator for eggs. Up to 20 eggs are laid there.

After 8 — 8, 5 months, the young appear, which immediately from the nest move to the branches of trees to be away from dangerous relatives. There are the first 2 years of their life.

Interestingly, the female can lay eggs without a male. The organism of these lizards is arranged in such a way that with the non-sexual method of reproduction, the eggs will be viable and normal hatchlings will hatch from them. Only they will be all male. 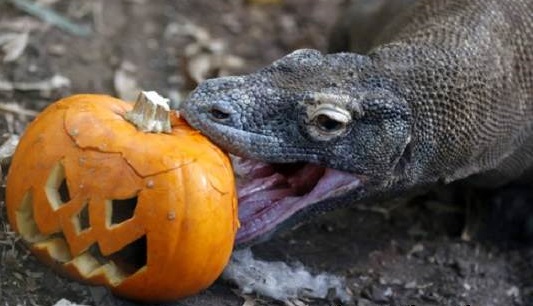 So nature worried about the case when monitor lizards find themselves on islands isolated from each other, where one female may not have relatives. How many years live Komodo monitor lizards in the wild, it was not possible to know for sure; it is considered that it is 50-60 years old. Moreover, females live half as much. And in conditions of captivity, not even one monitor lizard has lived for more than 25 years.