The snake moth with compliant temper

The moth is the most common species of snake from the whole family of vipers. The name reflects the main feature of the appearance — visible flaps on the top of the head. Toxic and moderately dangerous. 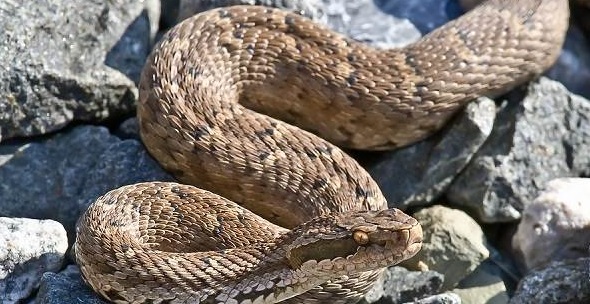 Features and habitat of the shitomordnik

One can recognize an ordinary moccasin as a dangerous reptile by its eyes: narrow vertical pupils, they give out the venomousness of reptiles. Round pupils say that there is no great danger, although all snakes bite hurt.

The shtekomordnika sizes are average: the body reaches 700 mm, the tail — a little more than 100 mm. 23 rows of scales placed on the serpentine body. The overall shape of the snake seems slightly flattened, especially when viewed from above.

The broad spotted head has a marked neck line. The lower part of the muzzle is slightly elevated. Under the eyes of a snake there is a hole, in the form of a small dimple, which performs a special function of capturing thermal radiation.

This is a specialized body in contrast to the standard. A dark stripe, like a snake, passes from the eyes from above down to the mouth. On top of the color is dark brown or brown, broken by light zigzag stripes, the belly is always lighter, yellowish-grayish with small dark dots.

Occasionally, individuals of monophonic, almost black or brick color are caught. The habitat of the common species, or the Pallas shield moth, as the reptile is otherwise called, is quite wide: from the shores of the Caspian Sea to the territory of the Far East.

It is found in Mongolia, the Korean Peninsula, China, and Northern Iran. The landscape diversity does not frighten the shtekomordnika: deserts and steppes, green meadows and marshes, pastures and river coasts, lake places and the foothills of the Alps — regions at an altitude of up to 3500 m above sea level. In Russia, the largest number of Snake Shield Monsters is found in the Lower Volga Region and Primorsky Krai. 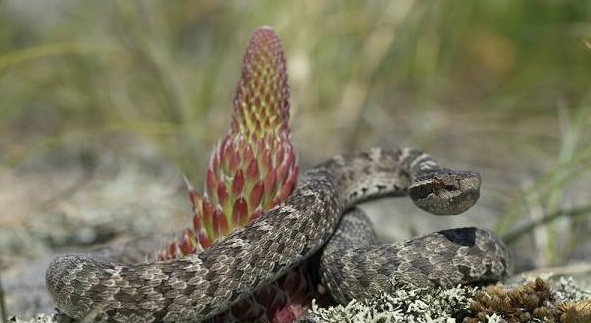 At the place of residence there are varieties:

There are other, morphologically close species. All relatives have a lot in common. The venomous nature of viper snakes is not lethal to humans, but caution should be exercised when meeting them. The bite of the shtekomordnika is very painful, causing abundant hemorrhages of the internal organs and in the places of the bite. 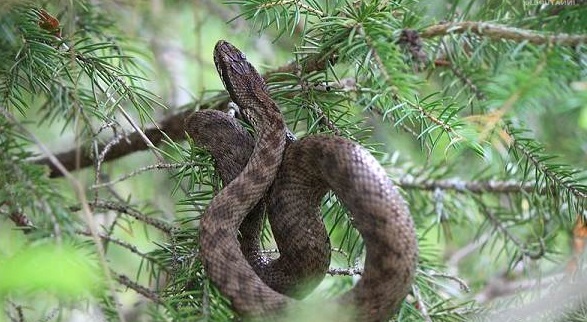 Neurotoxins also affect the nervous and respiratory systems. Poisons are especially dangerous for weak people, children or animals. With a successful outcome, the state after a bite improves after a week to recovery.

Character and way of life of the shitomordnik

Aggressiveness of the snake does not show, except in cases where it is not possible to retreat. Frequent meetings occur with hapless tourists, who in unfamiliar places do not show caution and attention to the place of advancement and can easily step on the snake. If the snake is ready to attack, then its tail tip vibrates.

In nature, the vipers themselves have someone to fear. Attacks of birds of prey are frequent: kite, moon, owl, hawk buzzard, jay, white-tailed eagle, even ravens, and besides they are not afraid of snakes, badgers, raccoon dogs, and harza.

Snake meat is a delicacy of oriental cuisine, which is why hunting for them has made man the main enemy. In addition, snake venom and dried meat are used in pharmacology. 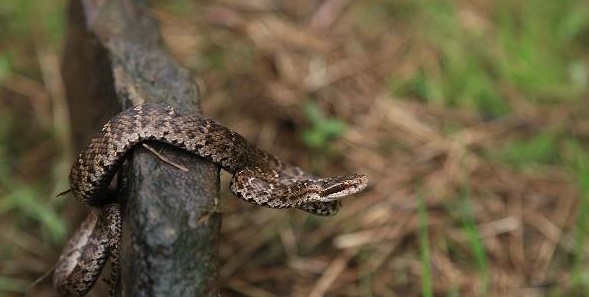 The activity of shchitomordnikov depends on the habitat, but more often manifests itself in spring and autumn in the daytime, and in summer — at dusk and at night. In the mountainous regions and in the north of the habitat, daytime activity prevails, in the southern zones — nighttime.

From early spring, after hibernation, the mating season begins until the fall, and passing for the warm season to favorite places: among the rocks, to the foot of the slopes, crevices among the stones, cracks in steep cliffs of the coasts.

The viper can hide itself in the holes of rodents, among stony slopes, swampy vegetation, and thick bushes. You can often find an ordinary shtekomordnika on abandoned settlements, the collapse of old houses and cemeteries. To bask in the sun is a regular day lesson at the beginning of summer. Swimming in ponds also attracts snakes.

The search for prey begins in the late afternoon. Snakes often do not have to fight the victims. A sudden bite is enough, then the animal tries to escape, but the poison acts. Next, the snake simply finds its dinner due to its ability to pick up thermal radiation.

The heat-sensitive fossa suggests the path to the victim. For wintering, the viper snakes begin to prepare in October. Joint cluster overwintering has up to 20 individuals. Hibernation lasts until the climatic spring at 18-20 ° C.

All animals that are capable of defeating and swallowing the reptile fall into the diet of shield-mordons. The size of the prey depends on the size of the snake itself and the region of its habitat. The so-called ecological plasticity allows them to spread widely and survive in various landscape zones.

Each shield-mord has its own hunting territory, beyond which it does not extend. Mining is determined by heat, followed by a sudden and rapid attack and bite. 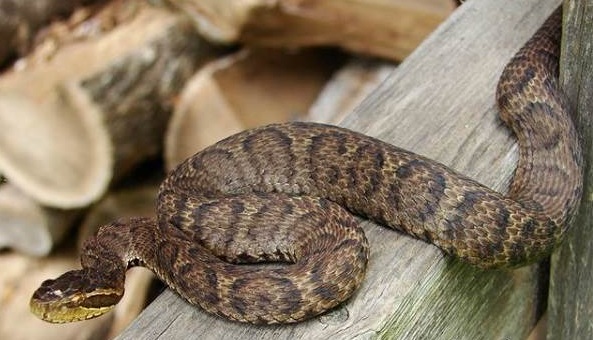 he poison of the shieldtail is deadly for animals, so it remains to eat prey. In most cases, rodents are the basis of food. In the steppe zone, the snake population is directly associated with vole colonies, and therefore does not leave habitats due to fodder affection.

In addition to field mice, shrews, birds nesting on the ground often become food for snakes. Treats are eggs in the nest and hatched chicks. There are always feed frogs, lizards, toads, even fish for the shield-morders living near water bodies.

Eating smaller ones is common. Snake young feed on insects. In the stomachs are scorpions, spiders, caterpillars. The hunting area is about 100-150 m in diameter.

Reproduction and life expectancy of the shitomordnika

After the mating season, the time comes for the appearance of the serpent offspring. Aspirus snakes, including shtekomordnikov, viviparous. Newborn babies appear in translucent sacks. 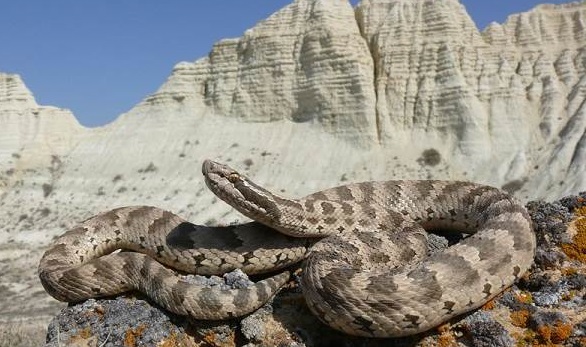 The thin walls do not prevent the release of small Shchitkomordnikov in the light. In one brood there are from 2 to 14 babies. Live cubs completely repeat the color of the parents. Their size at birth on average 15-20 cm, and weight is 5-7 g.

At first, the young feed on insects and invertebrate creatures, and later switch to normal food. Sexual maturity occurs after the second or third wintering, when the body length reaches approximately 40 cm.

Life expectancy on average ranges from 9 to 15 years, in captivity, the period may increase. Communication of a person with a shield-mord can be safe if you do not create hopeless snake situations.

She will always give in and avoid an unnecessary meeting herself, if you do not take her by surprise. In nature, man needs to remember that here he is on the territory of animal habitats and to show himself restrained and polite.