A miniature insect from the order of Hymenoptera — an ant, is a symbol of hard work. His ability to move loads that are several times greater than their own weight is unique. Some species are completely harmless, and there are those that pose a danger to the health of animals and humans. 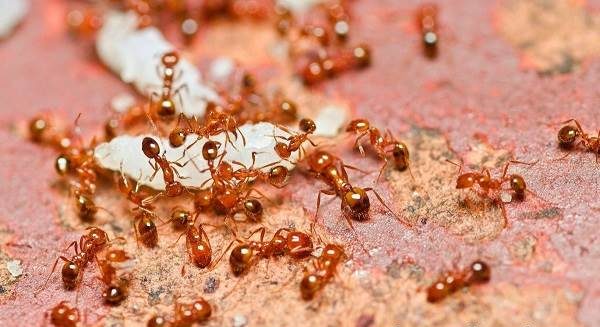 Description and features of the fire ant

An allergic reaction of immediate exposure is a small one that occurs when bitten by a fiery ant, deaths are known. The name of the insect was due to the poison with the content of the alkaloid of solenopsin, which is released when it is bitten.

It affects organisms like fire. No less dangerous is the fact of their excellent adaptation in the new conditions in the destruction of existing biocenoses. The ant itself hails from Brazil, but has already spread through the sea routes to China, Australia, New Zealand, the United States, and the Philippines. Eerie looking photos of fire ants. But still they are small creatures with a well-developed motor apparatus. They have six unusually strong legs. 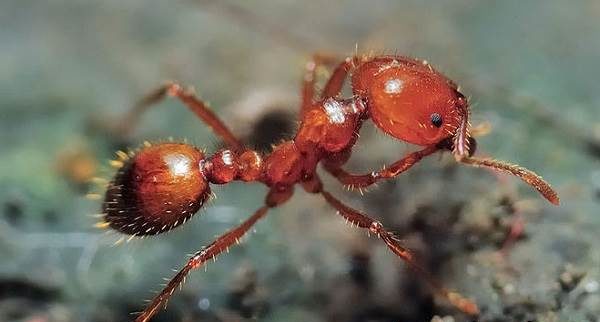 The body is in size from 2 to 6 ml, the length depends on the area of ​​residence of the insect. In the same anthill coexist, as well as crumbs, and «giants.» Their body is threefold: head, chest, belly. They are not only red color, there are brown or ruby ​​red.

The color of the abdomen is always darker. These insects are called public because of the existing hierarchy: females with longish wings, knee antennae up to 12 pcs .; males — also winged, whiskers up to 13 pcs .; workers — without them, shoots up to 12 pcs. Everybody has a long main stage — the scape. The sting is hidden in the abdomen, but there are subspecies with a pronounced needle.

A warm environment will be a good place for a source of fire ants. Therefore, they prefer to live in appropriate climatic zones closer to agricultural land, but can live in a person’s home. 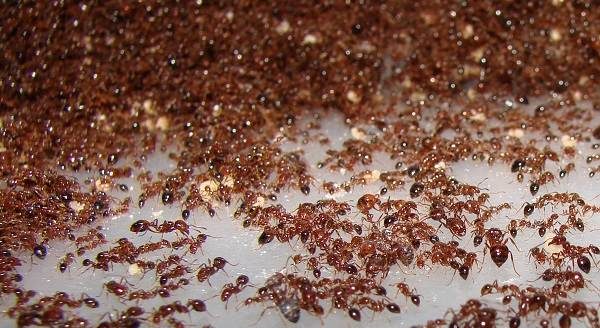 As individuals, they exist and hunt together. First, they spread through the legs through the victim’s body, dig into the skin, then with the help of the sting they inject a sizeable portion of solenopsin. Depending on the dose, the victim receives unbearable pain and a wound similar to a thermal burn, or dies at all.

With a peaceful life inside the anthill, there is a clear distribution of responsibilities, someone builds, protects, nursing offspring, and is responsible for provisions. In the countries of their habitats, a lot of money is spent on the destruction of anthills on the chemical treatment of land, veterinary control, treatment of the effects of bites.

They tried to eradicate nests by digging out sources, but smart females hide in numerous underground passages, up to 1 m deep, and then resume their settlement. There are cases when people were removed from the place of residence, and the red fire ants remained. 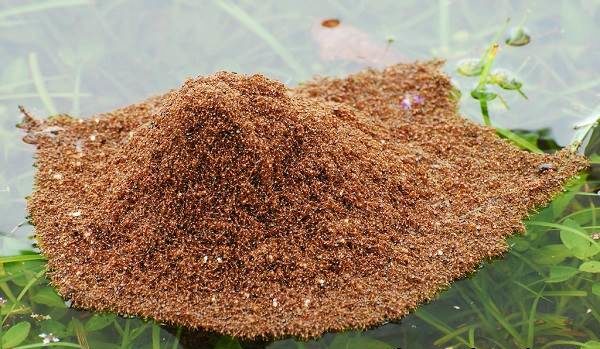 It will seem strange, but there is something good from these treacherous predators. They eat pests of agricultural crops: cereals and legumes; rice; sugarcane, etc. But the harm is still more. Small amphibians suffer from fire ants, and they have to change their morphology, behavior, and miss the laying of eggs.

Insects do not get along with their «relatives», their own kind, competing for food. They are not only predators, but also herbivores. In the photo, the fire ant is almost always captured carrying something on its back for building or feeding: shoots, plant stalks; different bugs, caterpillars; larvae; reptiles. 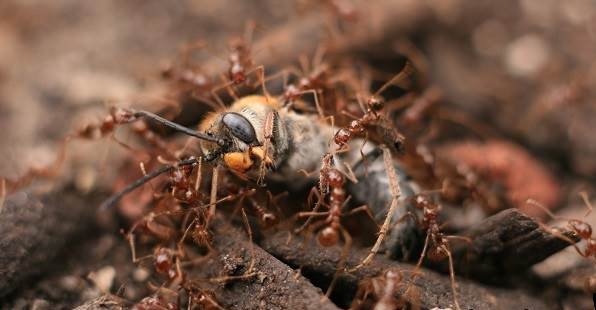 Reproduction and life expectancy of a fire ant

The method of reproduction of fire ant fallout by scientists is not yet fully understood, not proven. Earlier it was believed that among insects only drones of honey bees occasionally multiply by cloning. But females and males of this species are capable of producing genetic copies of themselves, which speaks of the separate gene pools.

Mating occurs only for the production of working individuals that are not capable of producing offspring. Despite its indecisiveness with other species, science knows the facts of crossing with other close ants, with the subsequent formation of offspring. 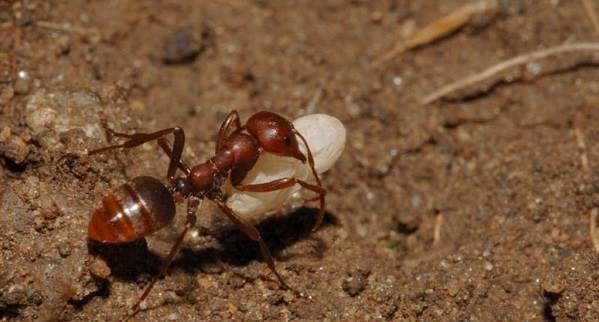 There are several females in the anthill, so there is no shortage of manpower. Larvae can be seen a week after debugging eggs up to 0.5 mm in diameter. After a couple of weeks, their growth stops, it turns out brood. The newborn at the genetic level lays the perception of the smell of his parent.

The duration of its life is 3 years or more, during this time one individual can produce up to half a million ants. The lifetime of others depends on: climatic conditions, where it is warmer, it lasts longer there; status, working “horses” and males live several days, several months, up to a maximum of 2 years; insect species.