Very little small animal externally similar to a mouse from animated cartoons, and behavior on a tiny squirrel, is a hazel dormouse. 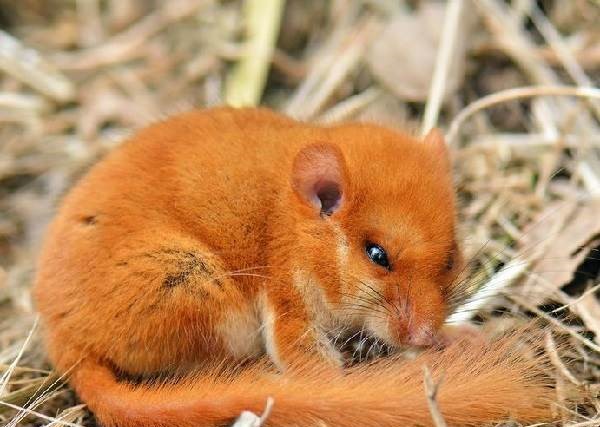 Not very long ago this small charm could be met from Baltic to the Volga region, but today it is simpler to see a hazel dormouse in the Red List, than walking on park or the square. The same situation with the number of these small animals is observed and around the world.

Features and habitat of a hazel dormouse

Mushlovka or hazel dormouse, it not a mouse and not little squirrel. This small animal has own family – «sonevy», belonging to big group of rodents. Even on a photo of a hazel dormouse it is visible that she very small. Really, from all dormouse, this look – the most tiny. The sizes of a small animal make only:

The biggest pride and feature of these dormouse– their moustaches, length of moustaches reaches 40-45% of the total length of a small animal. As for coloring, small animals are similar to the small specks of the sun which hid in foliage of trees, they possess saturated red, okhristy fur coats, all solar warm shades, thus the brush of a tail is always more dark, than the little body, and a tummy and inside of pads – is lighter. 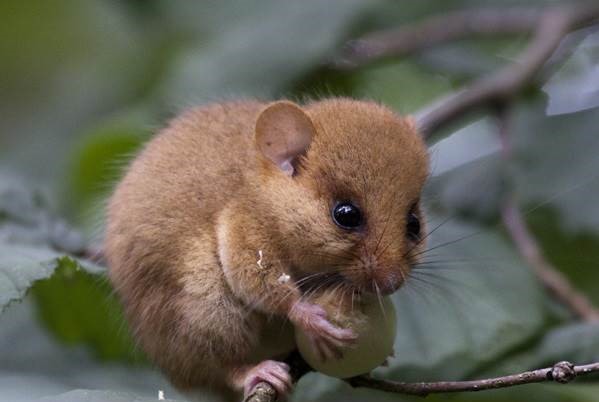 In the illustrated books, pictures often represent a hazel dormouse on branches of trees that is completely reliable because there live small animals in the mixed and broad-leaved woods of Europe, since the South of Great Britain and finishing with Lower Volga area, also lives in the north of Turkey.

The only exception is Spain, mushlovka don’t live in it and never lived. These small animals lodge in the woods with a rich underbrush, preferring prevalence:

These trees and bushes most provide сонь with products necessary to them. Coniferous forests of the sleepyhead are avoided but if in pine pine forest there are sites with deciduous trees or clearings with plentifully growing fruit bush, small animals willingly lodge in such territory.

Also feature of these small animals is their quiet attitude towards the person, for example, rather interesting facts can practically be learned about a hazel dormouse in any gardening association of the Yaroslavl region. In it, in the territory of our country, rather large number of these animals in habitat remained. 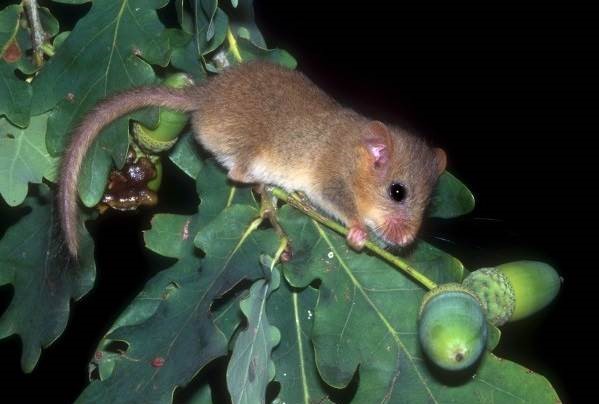 Sleepyheads very actively occupy nesting boxes, are settled on attics and under roofs of country houses and easily tamed literally for a summer season with what feeding troughs very much help. Cases when the small animals who came thus, summer residents take away with themselves for the winter to city apartments are frequent.

The contents in bondage of the sleepyhead is transferred very well at what the maintenance of a small animal differs in nothing from possession of a hamster or the seamumps , it is only worth considering that small animals lead a nocturnalism.

Character and way of life of a hazel dormouse

Way of life at сонь settled, his own territory is very important for each small animal. Thus, females «go» only on the sites which size on average makes from 0,6 to 0,5 hectares, and males travel and for borders of the direct possession, from 0,7 to 1 hectares.

Activity dormouse begins not at night, and in the evening, shortly before the first twilight and proceeds till the dawn. In the afternoon small animals doze, having curled up in a nest, for what in general and received the name – sleepyheads. 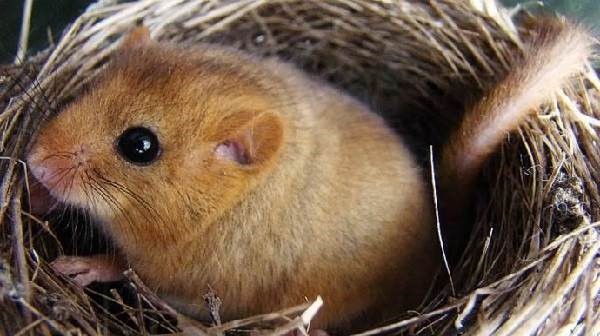 It is some inhabited constant nests lodges on each site at each small animal. If the nest is built by the sleepyhead, its diameter usually from 12 to 20 cm, it is made of branches, a moss, blades and leaves which are reliably fastened by a saliva of the sleepyhead possessing high glutinosity. Arrangement height is never lower, than meter, and above, than two.

However, mushlovka are very inconsiderate and willingly occupy others hollows and nests, sometimes forcibly «moving» titmouses, sparrows, a gorikhvostok and other «lawful» owners from there.

As for character, the sleepyhead – the single. They meet relatives only during the marriage period and that not always. Thus small animals are fearless and very curious, to some extent, they even are trustful and friendly that, in general, and does their domestication rather simple.

For winter of the sleepyhead fall into hibernation, using for this purpose underground holes which practically never dig, preferring old dwellings of other rodents. Duration of hibernation depends on temperature and usually lasts from October to May. 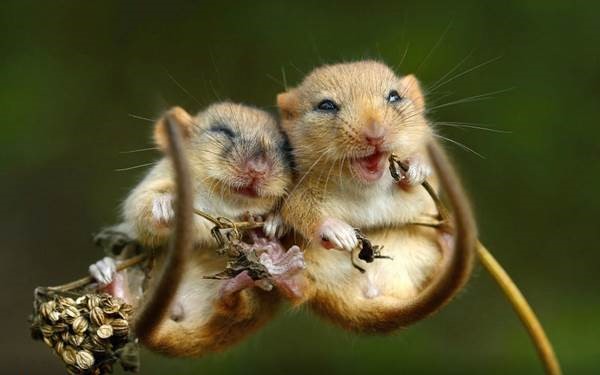 At what if temperature falls lower than 15 degrees, mushlovka fall into sleepy catalepsy even in the summer. And here at a stable temperature above this mark don’t need a dream at all.

Winter stocks of a mushlovka aren’t done, but the mink for winter quarters is warmed very diligently during all summer season, at each free minute which not so that and is a lot of, especially at the females who are bringing up kids.

Though the hazel dormouse and the vegetarian, but will never pass by bird’s eggs or a worm. A basis of a diet of small animals, nevertheless, are:

If spring early and warm, that is small animals wake up early enough, their food is made by thin branches, kidneys and escapes of plants

Reproduction and life expectancy of a hazel dormouse

Longevity of a hazel dormouse is rather small, on average small animals live from 2 to 3 years, however at the contents in bondage their age quite often steps in 6-7 years.

Existence of predators as sleepyheads don’t make a nobody’s diet has no impact on death rate any, extremely seldom becoming casual production. The short term of life and very high death rate, for example, in Moscow area, it exceeds 70%, is caused by ecology and jumps of temperature 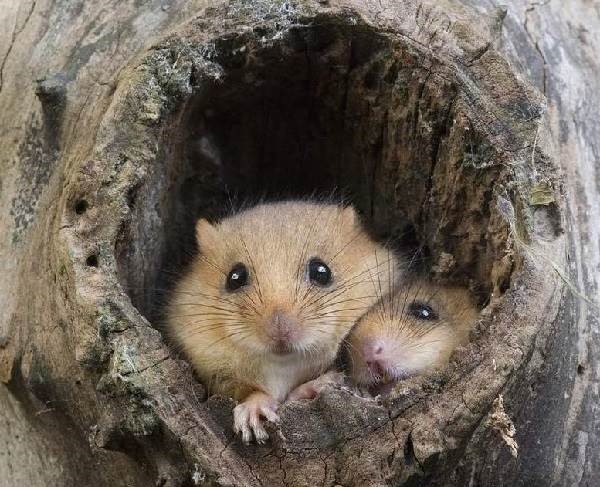 Small animals during the season spring-summer for which the female can bring 2 dung, in very warm summer – 3 dung couple. Pregnancy lasts from 22 to 25 days, bringing up of kids – from 25 to 30 days.

However, if the summer was cold and rainy, mushlovka don’t couple at all, preferring not to depart is far from own lodges.

Sleepyheads are born blind and absolutely helpless, they become similar to a small animal for 18-20 day of the life. Mushlovki – good parents, cases of eating of posterity by mother it wasn’t marked out in one zoo or at private owners of small animals. It allows to assume, as in the nature of the sleepyhead don’t kill kids.

Enter independent life of the sleepyhead at 35-40 day age, however, kids from a late dung or not found to themselves the territory, keep within on hibernation together with mother.

The description of a hazel dormouse would be not full, without mention of that these small animals not simply well feel as domestic pets and are easily tamed, willingly changing the woods for the open-air cage in the apartment, but they for a long time get divorced and on sale as domestic pets, there are even clubs of their fans and peculiar attempts of removal of new hybrids and breeds.

To buy the hazel dormouse who was born already in house conditions it is possible either according to the announcement, or at specialized forums of fans of these small animals, or in pet-shops. The price of kids varies from 230 to 2000 rubles.