Features and habitat of the Moloch lizard

Its name Moloch lizard inherited from the pagan god Moloch, in whose honor (if you believe the myths) in ancient times made human sacrifices. John Gray, who discovered this species in 1814, embodied in the title a terrible association with an ancient evil god, as the little lizard itself looks very frightening thanks to the numerous spikes on the body, tail and head. 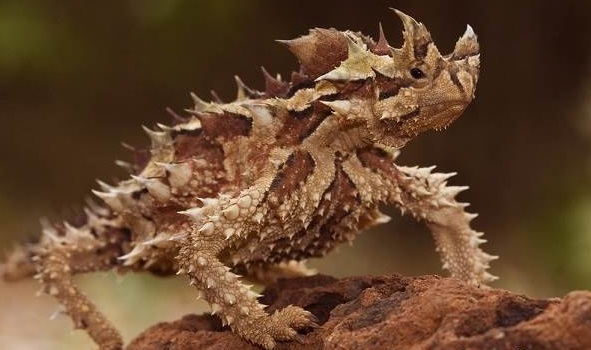 Above the eyes and on the neck of the reptile are small horns formed from the same thorns. The legs of the lizard are wide and strong with their thumbs, capable of moving quickly, however, the reptile most often moves without haste. 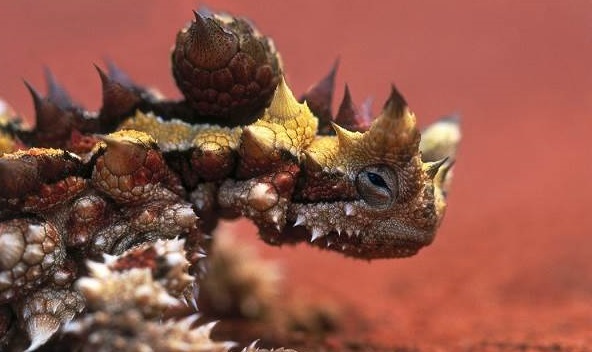 The Moloch is especially surprising due to the unusual “spotted” color — the top of the body can be any dark shade of brown or red with dark spots and a narrow light strip in the middle, the bottom is light with dark stripes.

The color can change depending on the temperature of the air and the surrounding background, so moloch instantly adapts to environmental changes for masking. An adult individual can reach a length of 22 cm. It is possible to meet moloch only in Australia, the reptile lives in deserts and semi-deserts.

Sometimes this species is confused with other scaly ones, so the moloch and the spiketail as lizards are similar in behavior, have a dense body and are covered with spikes, however there are also differences — the spiketail, as the name of the reptile says, has spikes only on the tail and color of its body can be much more diverse than shades of brown. 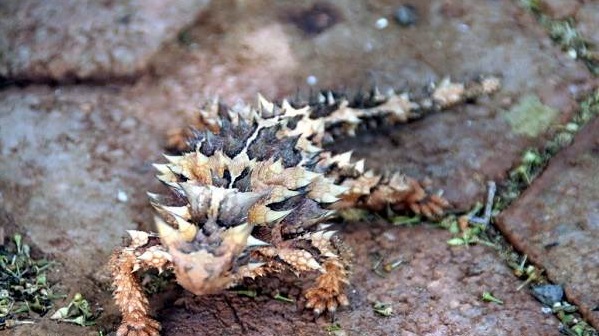 Usually the Moloch lizard in the photo looks like a toy, as it is small in size and can easily fit in the palm of your hand. The female reaches 10 — 11 cm in length, its weight can vary from 30 to 90 grams, males — up to 9.5 cm in length and weight of 50 grams.

Moloch is active only during daylight hours. Waking up in the morning, the reptile first of all takes sunbathing in order to raise the body temperature, which has fallen overnight, then follows to the place that serves as a toilet for him and only there he dispenses his need. The movements of a lizard are usually slow, movement is carried out on outstretched legs and with a raised or horizontal tail, which almost never touches the ground. 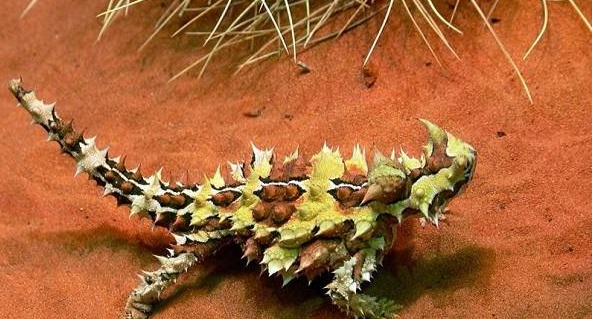 Scaly leads solitary lifestyle, having its own territory for hunting and recreation. This space is usually limited to 30 square meters. meters with separate places for coping, rest, sleep, disguise and eating.

Moloch digs up small minks, and can also, being on soft ground, urgently dig in completely at the moment of danger. If the reptile is on solid ground, its main task is to hide the head from the enemy, and he does it skillfully, bending the head down and exposing the thorny growth on the neck, which plays the role of a “false head”, thereby deceiving the attacker.

Such a system works well — because if a predator bites an unreal, and a false head, it will not be scary, moreover, the false limb is covered with sharp spikes, that is, the enemy will not be able to finish his work before the end. 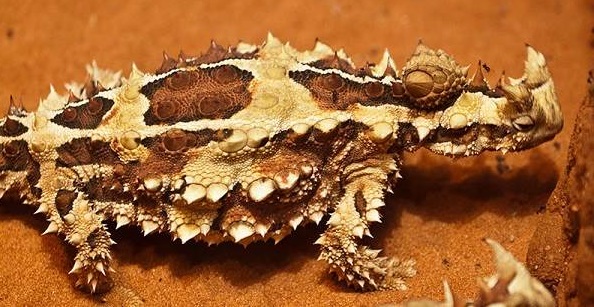 Birds of prey and monitor lizards are considered natural flake enemies. It would seem that the clawed body of the lizard is not afraid of strong claws and beak, however, despite the formidable look, it is absolutely harmless creature that does not have a chance to resist in the fight with a predator, because it does not have a poisonous bite or sharp claws.

Also, defending moloch can inflate with air, to increase its own size, change color up to dark brown and freeze motionless for a long time to disguise. Because of the unusual appearance, many terrarium lovers would like to buy a Moloch lizard , but this reptile is not adapted to life in captivity and requires very specific care.

Moloch uses forager ants as food. The hunt process is to search for an ant trail. Usually several such paths pass through the territory of the lizard. Having come to an already familiar place of eating, the Moloch settles next to it and, with a sticky tongue, catches the ants passing by (the only exception being scaly, is for insects that carry a large load). In one day, a reptile can swallow several thousand ants. 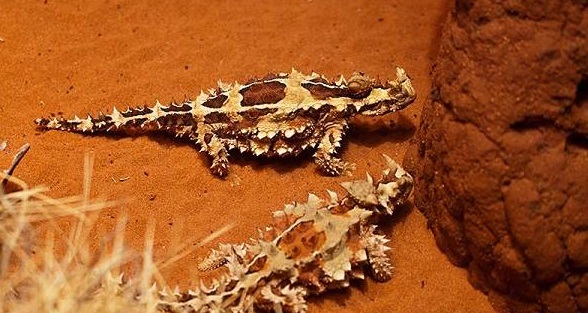 Unusual is the process of intake of moloch liquid. He does not drink in the usual sense of the word. The whole body of the lizard is covered with small channels through which moisture trapped on the body moves to the paste and the lizard swallows it. Thus Moloch gets the necessary amount of moisture only due to the morning dew. After entering the water, the weight of the reptile may increase by 30%.

Reproduction and longevity of moloch

The mating period lasts from September to December. At this time, the males begin to look for companions, for which they are able to overcome great distances, having left their permanent place of residence (which they do not do under any other circumstances). 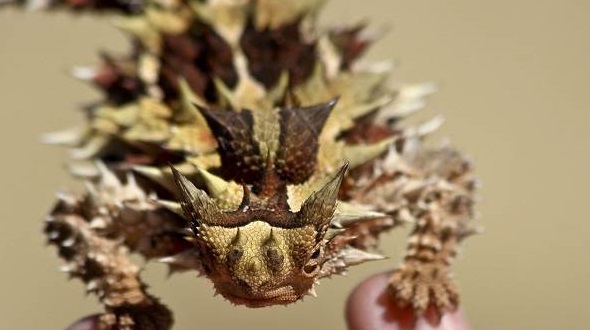 Immediately after mating, young dads return to past measured life, but expectant mothers have a difficult task — to find and carefully disguise the hole where she will lay eggs. After laying, the female also masks the hole outside and covers all traces leading to a secret place. The number of eggs laid can vary from 3 to 10, the babies appear in 3.5 — 4 months.

Kids have a weight of 2 grams and 6 millimeters in length, but even with such microscopic dimensions, they immediately represent a copy of an adult individual. After hatching from the egg, they eat the shells, and then begin their way up from the hole. To reach the size of the parents, the little lizard will need about 5 years for a Moloch already looking like a dragon . The life span of the Moloch in the wild is 20 years.