Musk ox — an animal that has unique qualities, experts attributed it to a separate unit. In appearance, this animal resembles both bulls (horns) and sheep (long hair and short tail).

Features and habitat of the musk ox

To date, musk oxen are the only representatives of musk oxen, as a genus. They are part of the horned family. It is believed that distant relatives of these mammals lived in Central Asia during the Miocene. The area occupied mainly mountainous areas. 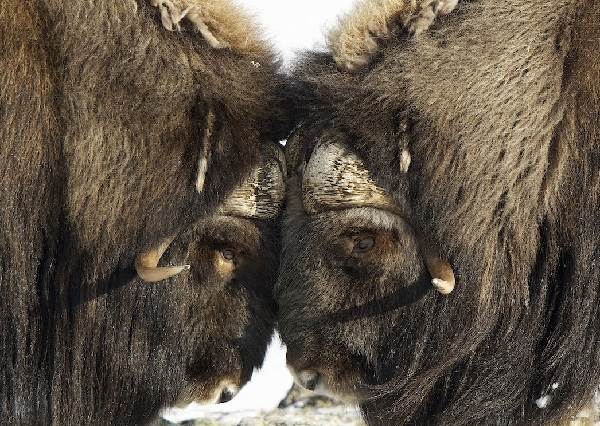 During the cold snap 3.5 million years ago, they left the Himalayas and settled in the northern part of the Asian continent. The icing in the Illinois period caused the musk oxen to move to present-day Greenland and to the north of America. The number of musk oxen significantly decreased during the Late Pleistocene extinction due to sharp warming.

Only reindeer and musk oxen, as representatives of ungulates, managed to survive difficult times. Musk oxen, until recently widespread in the Arctic, have almost completely become extinct in Eurasia.

In Alaska, the disappearance of animals occurred in the nineteenth century, but in the 30s of the last century they were brought there again. Today in Alaska there are approximately 800 individuals of these animals. The musk oxen came to Russia on Taimyr and on Wrangel Island.

In these areas, the musk oxen inhabit the territories of nature reserves and are under state protection. A very small number of these animals remained on the planet — approximately 25,000 individuals. The appearance of the animal is consistent with the harsh conditions of the Arctic. The protruding parts on the body of the bull are practically absent.

This significantly reduces heat loss and reduces the possibility of frostbite. The wool of the musk ox differs in length and density. Thanks to her, a small animal seems especially massive. Wool falls almost to the ground and has a brown or black color. Only the horns, hooves, lips and nose are bare. In summer, the “coat” of an animal is shorter than in winter. 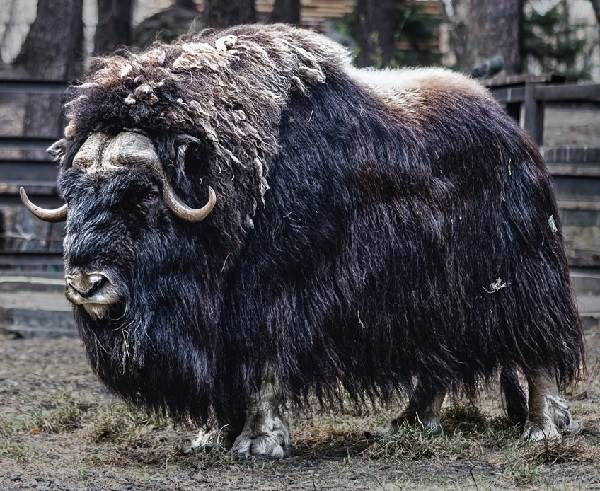 It is almost impossible to detect white musk oxen. Only in northern Canada, not far from Queen Maud Bay, can rarely be found individuals of this genus. Their wool has a very high price. The hump in the form of a nape of a musk ox is located in the shoulder area. Limbs are small and stocky, with the front much shorter than the rear.

Hooves of large sizes and round shape, well adapted for movement on snow-covered surfaces and rocky terrain. The width of the front hooves exceeds the width of the rear and facilitates the rapid excavation of food from under the snow. On the massive and elongated head of the musk ox there are massive horns, which the animal throws off every six years and uses to protect against enemies.

Males have larger horns than females, which are also intended as weapons during fights with each other. The eyes of the musk oxen are dark brown in color, the ears are small (about 6 cm), the tail is short (up to 15 cm). Animal vision and smell are excellently developed.

They can see perfectly well even at night, they can sense the approaching enemies and can find food that is deep under the snow. Females and males, as well as animals from different regions, differ significantly from each other in weight and height. The weight of males can vary from 250 to 670 kg, height at withers is about one and a half meters. 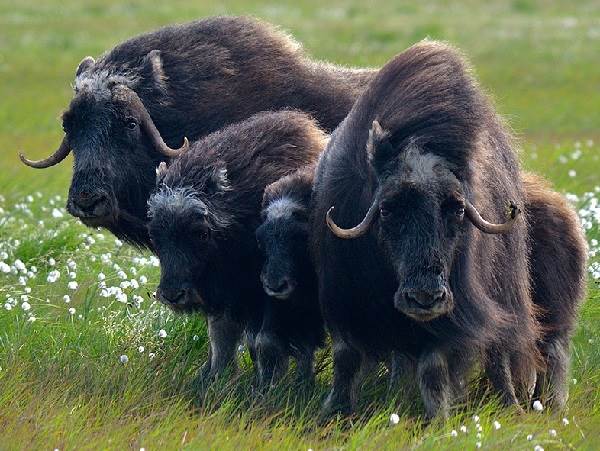 Females weigh about 40% less, their height is about 120-130 cm. The largest individuals inhabit western Greenland, the smallest — northern. The musk ox differs from similar animals, such as yak, bison, tooth, not only by its appearance, but also by the diploid number of chromosomes. The animal received the name “musk ox” because of the specific aroma secreted by the glands of the animal.

The nature and lifestyle of the musk ox

Musk ox is a collective mammal. In the summer, a herd can reach up to 20 animals. In winter — more than 25. Groups do not have separate territories, but move with their own routes, which are marked with special glands.

Older animals dominate over the young and in the winter time push them out from places where there is a lot of food. The musk ox lives in a certain territory and prefers not to move far from it. In search of food in the summer, animals move along the rivers, and in the winter towards the south. The musk ox is a very hardy animal. But it possesses such qualities as slowness and slowness. 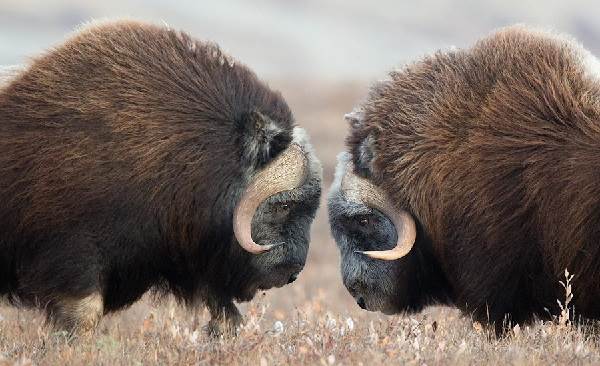 Fight leaders for the right to continue their race

If he is in danger, runs at a speed of 40 km / h for a long time. Subcutaneous fat and long six allow the animal to survive the cold of -60 degrees. A lone wolf and a polar bear are natural enemies of musk oxen. However, these artiodactyls are not among the weak or cowardly animals.

In the event of an enemy attack, the animals occupy a perimeter defense. Inside the circle are calves. When attacking, the bull closest to the aggressor throws it with its horns, and nearby standing trample down. This tactic does not work only when meeting with an armed man who can kill an entire herd in a short time. Sensing the danger, the animals begin to sniffle and snort, the calves bleat, the males roar.

Grassland is looking for the main bull in the herd. In winter, musk oxen more sleep and rest, which contributes to a better digestion of food. Musk oxen live most of their lives in cold harsh conditions, so their diet is not very diverse. The duration of the Arctic summer is very short, so the power of the musk oxen is made up of dry plants dug out from under the snow. Beasts can get them from depth to half a meter. 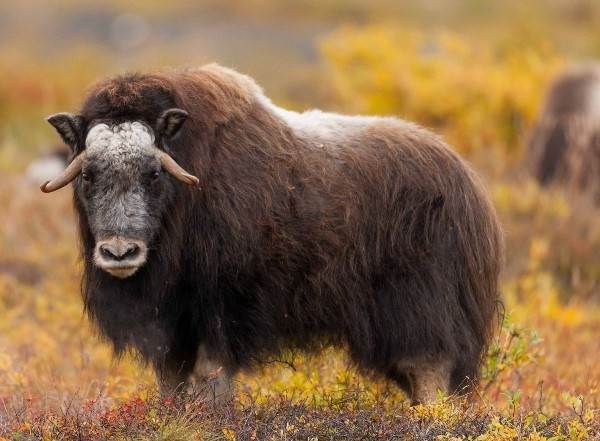 In winter, musk oxen prefer to settle in places with little snow and feed on lichens, moss, moss and other dwarf tundra plants. In summer, animals eat sedge, branches of bushes and tree leaves. During this period, animals are in search of mineral solonets in order to get enough of the necessary macro-and micronutrients.

Breeding and life expectancy of the musk ox

At the end of summer, the beginning of autumn, the breeding season begins at the muskox. At this time, males ready for mating rush to a group of females. As a result of fights between men, the winner is determined, which creates a harem. In most cases, fierce battles do not occur, they roar, butt or kick their hooves. 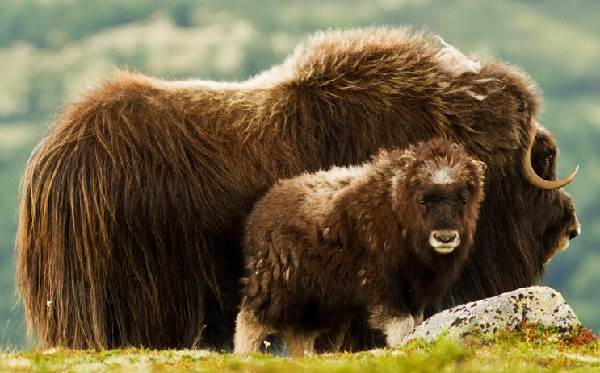 Deaths are rare. The owner of the harem shows aggression and does not let anyone close to the females. The duration of pregnancy in musk oxen is about 9 months. In late spring, early summer, a calf weighing up to 10 kg is born. A baby is born one, very rarely — two.

Half an hour after birth, the baby is already on its feet. After a few days, the calves begin to form groups and play together. It feeds mother’s milk for half a year, at which time its mass is about 100 kg. Two years mother and baby are inextricably linked with each other. The animal matures at four years. The life span of musk oxen can be up to 15 years.

How to teach a kitten to the tray