Muskrat was brought from North America in the 30s of the 20th century. She quickly mastered and became a full-fledged representative of the fauna, settling large areas. 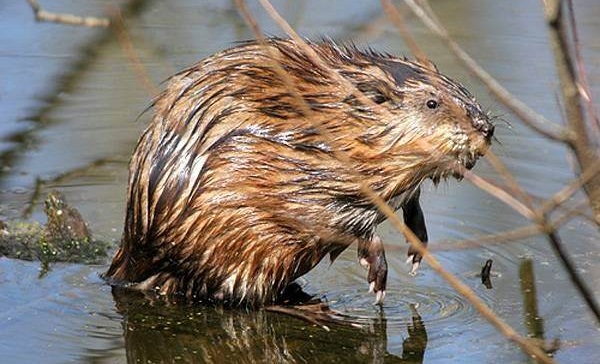 Description and features of the muskrat

The muskrat is a species of rodent whose size reaches 40-60 centimeters. Surprisingly, the tail makes up almost half the length of the body. Their weight ranges from 700 to 1800 grams. Representatives of the species are distinguished by thick fur, it happens in several shades:

From the side of the belly, the fur is bluish-gray. The tail of the fur does not contain, only scaly plates. The tail has a flat shape. Muskrat fur is very valuable. The price of muskrat is rather expensive.

The muskrat is a very good swimmer, this is helped by the shape of the tail and the presence of swimming membranes on the hind legs between the fingers. The front legs do not have such. Because of this, the rodent spend a huge part of life in the aquatic environment. Under water, they can be located about 17 minutes. 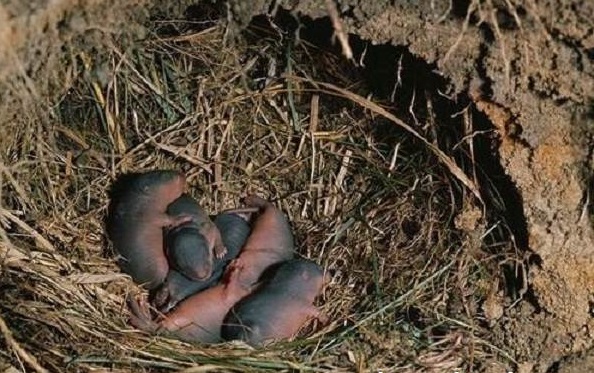 An interesting feature is the structure of the lips — the incisors pass through them. This allows the muskrat to eat vegetation under water without opening its mouth. The muskrat has remarkable hearing, in contrast to such receptors as sight and smell. If a danger arises, she first of all listens to the sounds.

This animal is very brave, I can even say evil. If a muskrat sees an enemy in a man, she can easily rush at him. Bred in captivity more peaceful and not so aggressive.

The purpose of breeding muskrat is getting fur. Their meat is not of special value, although in some countries it is considered very popular. By the way, muskrat fat has quite healing properties.

For muskrats, the more natural habitat is the body of water. She spends a huge part of her life in it. If the reservoir has a large amount of silt and a lot of vegetation remnants, animals build there a hole and nesting huts in which they live and breed for a long period. An important criterion is that the habitat is not frozen. 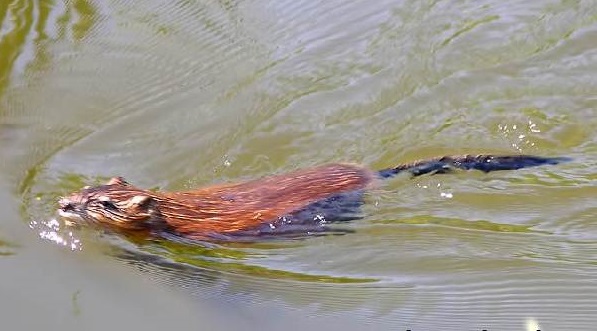 Rodent burrows are located about 40-50 cm apart. Animals live in families, the number of residents directly depends on the reservoir. An average of 1 to 6 families live on 100 acres.

Muskrats can build several types of housing for themselves, for permanent habitation they are mostly huts and nests. During the cold period, there may be shelters built from ice and vegetation. The hole diameter is up to 20 centimeters, followed by the nest itself (up to 40 centimeters).

Inside it is always dry, covered with vegetation. Burrows often have several exits and are located in the root system of a coastal tree. The entrance to the hole is above the water, it protects it from dangerous predators. 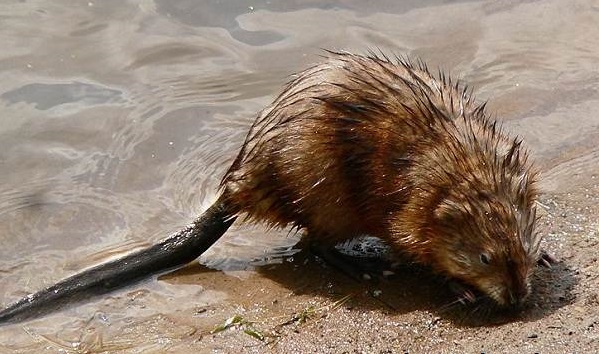 Cottages are lined up in places where there is dense thickets and aquatic vegetation. They are almost identical in shape and size, they line up fairly high above the water level (up to 1.5 meters).

The construction of huts begins in autumn, and they cost the entire winter period. They are dry and warm, and the entrance to the hut is in the water. If you can not see everything personally, photos of muskrats and their homes can be found in various sources. 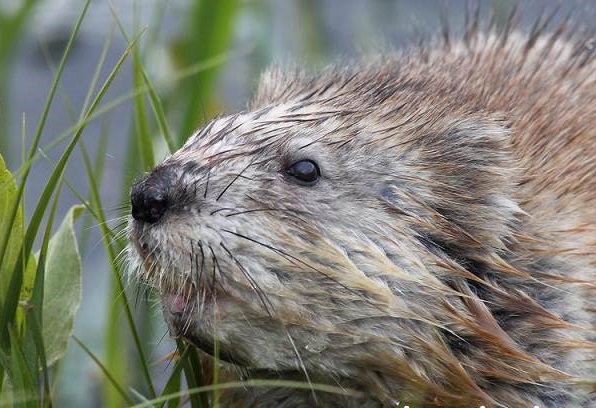 The life of a domesticated muskrat must correspond to its free lifestyle. That is, in the enclosures necessary pools with water. Without it, the animal can not exist, it needs to wash the mucous membrane of the eyes, maintain cleanliness and even mate.

Lack of water can lead to the death of the animal. In addition, it is necessary to change it at least once every 3 days, preferably more often. Muskrats are quite active and mobile animals, so they should not be very small enclosures. Muskrats build their burrows fairly secure, because this species of rodent has a lot of enemies. Almost everyone who is bigger than him in size.

The muskrat, like many other species of rodents, has a rather low lifespan. In captivity, they can live up to 10 years, but the free life lasts no more than 3 years. They develop puberty in 7-12 months.

The female bears her offspring for one month. At times she can lead from 6 to 8 kids. They are born completely naked and blind, and weigh no more than 25 grams each, the lactation period lasts 35 days. A litter can occur up to 3 times per year. Children become independent after 2 months of life.

The muskrat beaver begins to «care» for its female with the first appearance of heat, and a characteristic squeak is created. The male takes a very important part in raising the young. 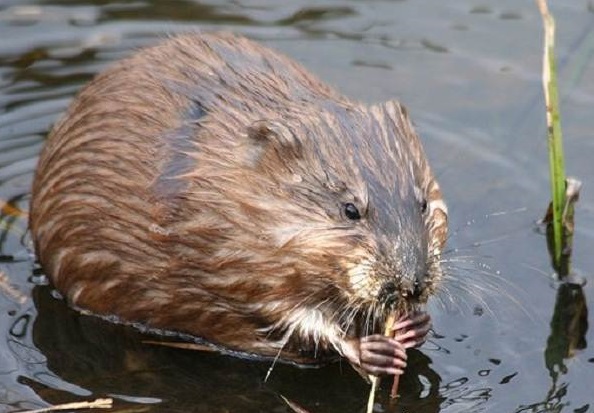 In the fall of the birth rate falls, it is rare to see a pregnant female. For this reason, the hunt for a muskrat begins in the autumn period. The activity of reproduction in captivity also occurs in the spring.

A few days before the birth, the female and the male begin to make the nest, so they should put plants and branches in the aviary, as well as some land. On the 8th-9th day of the life of babies, the male assumes all the duties of upbringing. In captivity, it is better to finish the lactation period 3-4 days earlier, then one more offspring is not excluded. The young are removed from their parents at the age of 1 month.

Muskrat numbers are stable. Its periodic decrease or increase does not depend on human intervention, more on the law of nature. Fur production is more dependent on the fur industry.

Muskrats feed mainly on plants, but do not neglect food of animal origin. The basis of the diet consists of the following components:

Muskrats in captivity try to give the same diet, adding a little food of animal origin (fish and meat waste). Products that are consumed by the animal a lot, they can be given porridge, pre-steamed grain, feed, fresh greens, all kinds of roots.

Also at home, rodents are given brewer’s yeast and crushed eggshells. Muskrats in the wild can eat frogs, clams, and various insects. Such a diet they have mainly from the lack of plant look. They practically do not eat fish.

Muskrat skin processing and its value

During the discovery of hunting begins active fishing for muskrats . Her skin is very appreciated and has a high cost. Muskrat skins are primarily subject to careful processing. First, they are well dried. After the skin is completely dry, it is degreased. Then they are ruled, dried and manufactured. 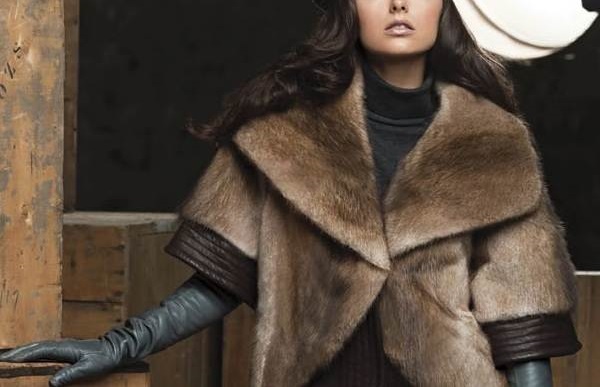 Large parts go to large fur products, small ones are used most often for caps. Muskrat hat is very pleasant to wear. Also, every woman of fashion will not refuse to buy fur coats from muskrat, they are very warm, soft and beautiful. All processing is done very carefully, using professional technology.

You can buy muskrat in specialized stores. Products from her fur are in great demand. Muskrat meat is practically not used, it is considered very high-calorie, although many people use it. The price of a muskrat , and in particular, on its skin, depends on the quality and size of fur. Naturally, the colors that are less common will cost more.