The porcupine is directly related to the rodent family. The body length of the animal is approximately 80 cm, and its weight is about 13 kg. The appearance of the porcupine in the photo suggests the idea that he is a rather gloomy and aggressive-minded creature.

In particular, we are talking about needles that cover the body of an animal. The approximate number of needles is 30 thousand. They may seem weighty, but, in fact, each needle weighs no more than 250 g. 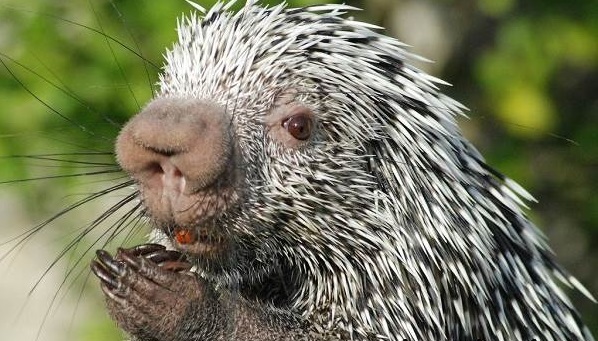 In addition, the porcupine quills do not prevent him from moving at all, on the contrary, they help the rodent represented to keep its body on the water and also to defend itself from predators.

The fact is that needles play the role of floats, thanks to the voids inside and, of course, scare other animals . At the same time, they are the cause of the extermination of porcupines, since the needles are used in the manufacture of all kinds of jewelry.

The porcupine has extremely strong and strong teeth. For example, in order to gnaw through a metal wire of medium diameter, the animal will need a small amount of time. The rodent’s diet includes a variety of roots, apples, and hawthorn, wild rose.

In addition, the porcupine eats pumpkin and potatoes, for the sake of extraction of which the rodent is quite ready to go to someone’s land. At the same time, animals used to sleep in the daytime, and hunt for their favorite vegetable food at night. How much the animal loves the pumpkin, you can watch the video with the porcupine below the article. 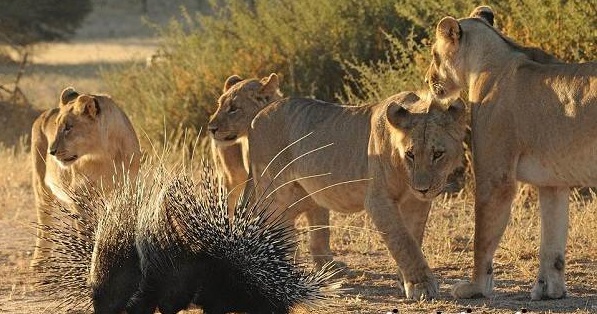 Also among the favorite varieties of food porcupine should include bark and branches of various trees. It is worth noting that each porcupine is a significant threat to the forest. The fact is that they practically can not do without the bark.

Porcupines quickly climb a tree at the expense of long, strong claws in search of a convenient spot. Sitting on a solid branch, the animal proceeds to its meal.

To assess the damage that porcupines cause to trees, one only needs to imagine that during the winter alone a member of the rodent family is able to destroy up to hundreds of trees.

A legend is widely believed that porcupines shoot their sharp needles in case of danger. However, in reality this is a myth, the cause of which is the behavior of the porcupine and the features of its “weapon”. 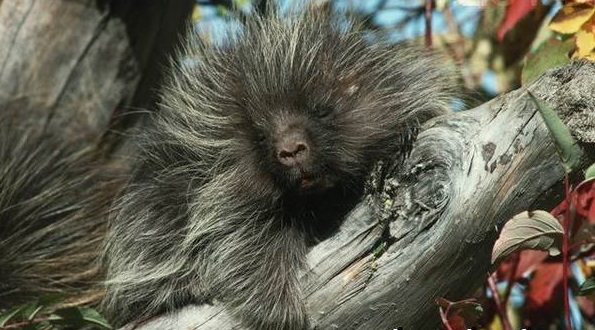 Despite the formidable look of the needles, they hold tightly enough, therefore, when the porcupine feels dangerous and intends to intimidate the enemy, he shakes his tail, which leads to the loss of needles.

With the help of pictures with porcupines it is not difficult to guess that these animals are divided into a large number of species, the main of which are South African, Malay, Crested, Indian and Javanese.

Moreover, the name of each species appeared in connection with the territory in which it is distributed. Among all species, a wood porcupine is also distinguished , which is inferior to its relatives in body size and needle length. 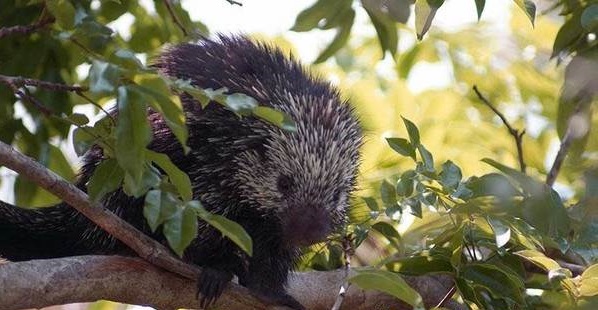 Porcupine on the photo

The South African porcupine got its name from its habitat. At the same time, the animal prefers all kinds of vegetation with the exception of woodland.

The crested porcupine is considered the most common species of the entire genus. It can be found on a fairly extensive territory, which includes Southern Europe, Small and Southeast Asia, the Middle East, India, and partly some other lands.

The Indian porcupine is found not only in India, but also in South and Central Asia, in the South Caucasus and in the territory of Kazakhstan . The habitat of the Javanese porcupine is represented by the territory of Indonesia, and the Malayan species is distributed in northeastern India , in China , Nepal, Thailand, Vietnam, and also some islands and peninsulas. 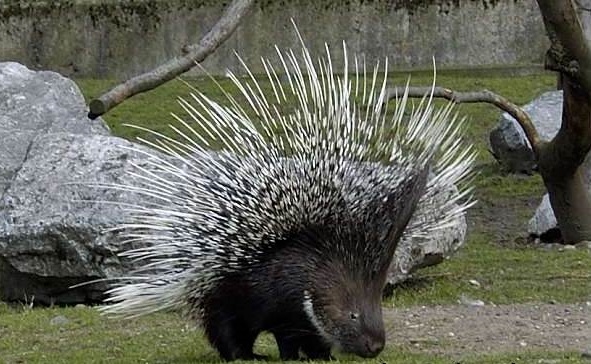 In general, the porcupine is considered a mountain animal. In this case, it is most convenient for him to live in his own hole. In the foothills, representatives of the rodent family are rare, and even more rarely on flat terrain.

However, even there porcupine tries to find a place with ravines, hollows and other landscape phenomena. The porcupine lives not only in burrows that it digs on its own, but also in the hollows of rocks, caves, etc.

Often the porcupine burrow consists of numerous branches and additional moves. Quite often, a porcupine can be found near settlements. Addicted to food grown on the plots, sometimes the porcupine solicits food , daring to come extremely close to people. 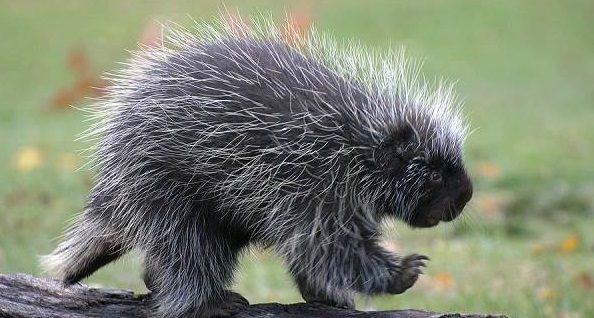 Porcupines breed only once during the year, and this period falls in the early spring. As a rule, porcupines are characterized by few offspring, the maximum number of cubs reaches five. However, most often one or two porcupines are born, so you can safely talk about not intensive reproduction.

Having appeared on the light, the cub of porcupine is already well formed and moderately developed animals. He is quite capable of climbing trees, but instead of needles in a newborn porcupine there is a soft hair covering, which is why he cannot protect himself. 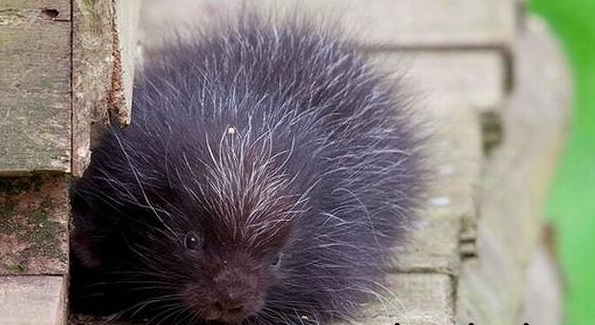 In the photo a baby porcupine

But after a short time, each hair begins to harden, as a result of which strong needles appear. The average lifetime of the porcupine is about 20 years. People managed to tame these animals, so now there are many opportunities to buy a porcupine as a pet.