Rabies in cats: the first signs and symptoms, prevention and treatment

The causative agent of rabies refers to myxovirus. Myxa is translated from the Greek as «slime.» With this physiological fluid, infection is transmitted. The development of mucus in patients increases. Suffice it to remember the flu. He also belongs to myxovirus. They also cause parotitis, bird plague, and measles. Combines viruses group structure and composition. 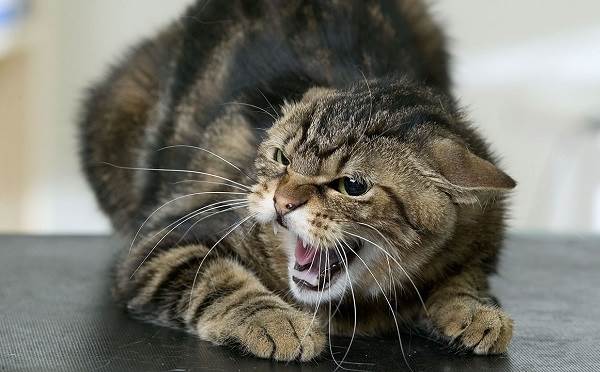 In the spherical capsule is hidden ribonucleoprotein helix. It resembles a needle in an egg, which in fairy tales symbolizes the death of Koshchey. Getting to her is not easy. The rabies virus survives in freezing and in a rotting environment. From here periodic flashes of incidence. Among the susceptible animals are cats .

Infection occurs through the bite of a sick beast. A cat can be bitten not only by its relative, but also by a dog , a fox, a raccoon. We learn what to expect next and how to protect yourself from infection, because people are also at risk. 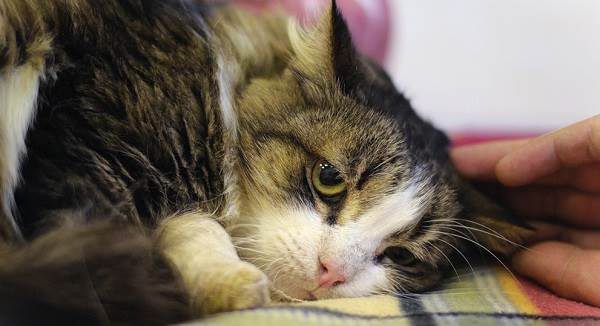 Incubation period of rabies in cats

During the incubation period, there are no signs of rabies in cats . Baleen become contagious for 8-10 days before the first symptoms. The total duration of the latent period is 4-6 weeks in the standard and up to 12 months in exceptional cases.

Faster than 4 weeks, the virus manifests itself in individuals with weakened and unsteady immunity, for example, kittens and animals after surgery, with allergies. 8-10 days before the end of the latent stage of the disease, the virus enters the blood and saliva. Rabies is transmitted, usually with the latter.

In the body of an infected animal, the pathogen moves along neurons — cells of the nervous system. The purpose of bacilli is the brain. It is because of violations of its functions that the typical symptoms of rabies are manifested.

Once bacilli tend to the brain, the distance of the bite from the head affects the speed of the disease. Equally significant is the amount of saliva in the body and the concentration of rabies in it. So called deadly viruses.

Passing through the neurons, the virus enters not only the blood and saliva, but also many organs, lymph. Only bile and milk remain clean. Therefore, theoretically, an infected cat can feed healthy offspring. 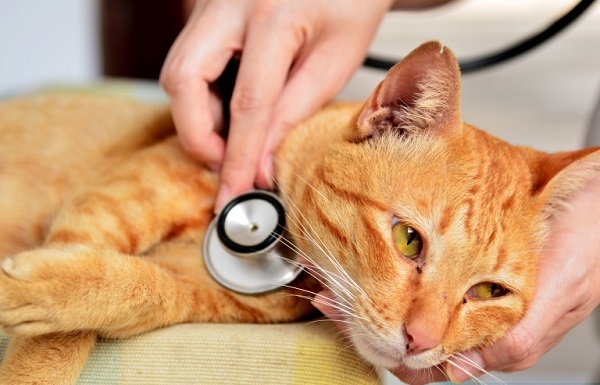 However, this is possible only before the manifestation of the clinical picture of the infection. With the first symptoms of rabid baleen, it’s not up to the kittens, moreover, parents can harm them.

Symptoms and signs of rabies in cats

The signs and symptoms of rabies in a four-legged one depend on the form of the disease. Listing start with a typical:

1. The violent form of the disease proceeds from grace to anger. At an early stage, the cat actively wriggles, behaves servilely. The wound from the bite begins to itch, even when already protracted. This is the first irritant. Then the animal may refuse to eat, or start biting inedible objects. Here the stage of active caresses is replaced by alienation and apathy. After 2-5 days they develop into aggression.

Coupled with it begins copious salivation, the lower jaw drops. This is the result of laryngeal paralysis. The meow will turn into a vulture, wheeze. The cat will start to avoid light and water, but will not always be able to do it. 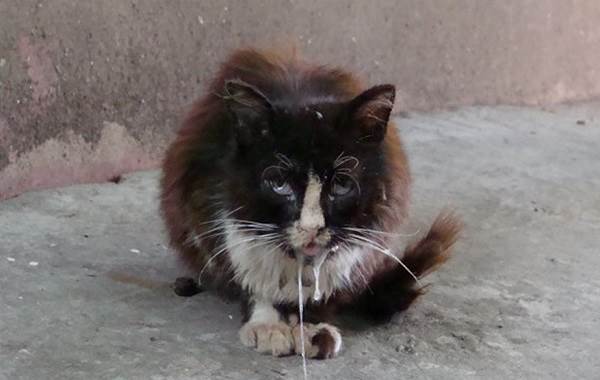 After the larynx paralyzes the hind legs, and then the whole body. In parallel, the animal develops strabismus, lenses grow turbid. The end of the quadruped meets in convulsions and with fallen, wet hair. The development of the disease is rapid, usually within 8-12 days.

2. The atypical form of the disease is distinguished by a blurred clinical picture and an equally blurred time frame. The first sign of rabies in cats can be left behind for months. This makes the illness cyclical.

That subsides, then manifesting itself, the symptoms of Rabies intensify. In the lull between the exacerbations, one might think that the animal had recovered. However, in reality such cases are exceptional and belong to the third type of feline rabies. 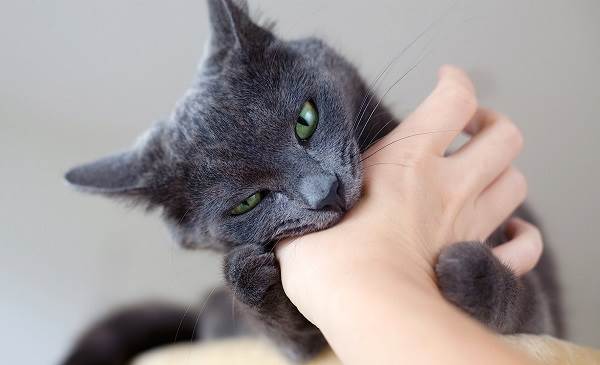 The rabies virus is transmitted to humans through the bite of a sick animal.

3. The abortive form of rabies is different and can occur both in a violent and atypical pattern. The difference is in a quick recovery. It comes on the active stage. According to statistics, abortive rabies occurs in 2% of sick baleen.

However, most of them die not from rabis, but from the hands of veterinarians. In order for infected individuals not to transmit the virus to other animals and humans, they are trapped and put to sleep. If 100% of baleen animals were given a chance to fight the disease to the last, it is possible that the fixed proportion of abortive rabies would increase.

If you summarize the symptoms of different types of Rabies, the clinical picture may resemble cat plague. The latter, however, is accompanied by conjunctivitis instead of blocking the lower jaw. In the early stages, rabies can be confused with parotitis. 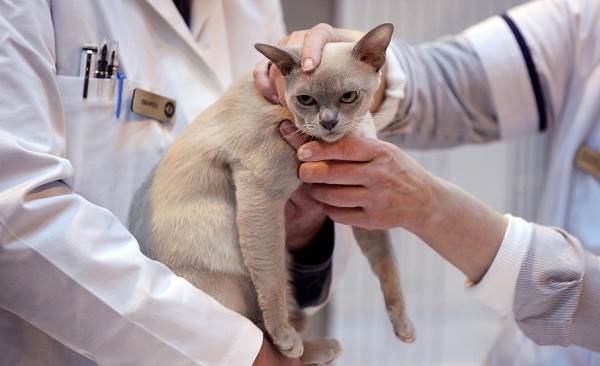 This acute intestinal infection is accompanied by diarrhea, which means emaciation and dehydration. In patients with rabies may also be an upset stomach. Often, they are accompanied by refusal to eat or change in eating habits. The stage of the fear of water is preceded by its greedy reception.

How to determine rabies in cats?

The causative agent of rabies is defined in saliva and blood. They are taken for analysis, and the cat is quarantined. In a single cage, the animal is about 2 weeks. Time indicates whether the primary diagnosis is correct. Independently put it on the early signs. You can save the cat and protect yourself with emergency medical care right after the bite.

The problem is that the owners of the cat do not always see the attacker. Was the aggressor with foam at the mouth and sagging jaw unknown. This reduces the anxiety of the owners. Not everyone is in a hurry to the veterinary clinic. 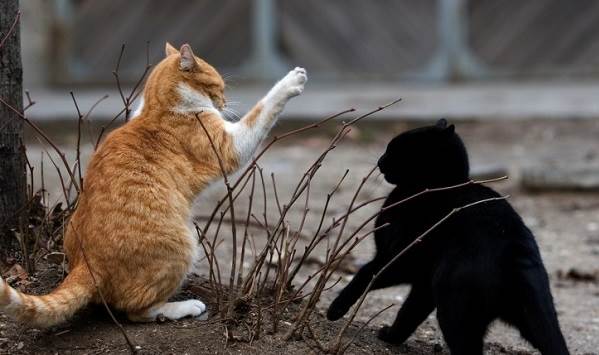 Slow down owners of infected cats makes the same atypical way of infection. Transmitting with saliva, the virus is able to penetrate into the body through microcracks in the skin. A cat may simply step on the physiological fluids of another animal. If there are cracks on the legs, the infection is activated. In this case, one can be suspicious only at the first symptoms of Rabies.

Being covered with wool, cats rarely become infected through the skin. In order to saliva fell on her and in the internal tissue, need prokus. Otherwise, the virus «gets stuck» in a moustached coat. However, given the survivability of Rabies, and it is dangerous. 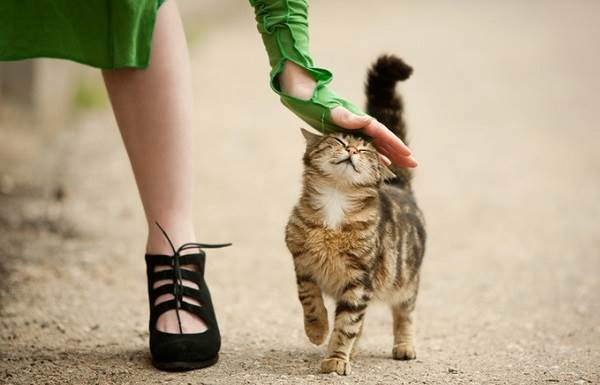 People get infected through the skin more often. It is enough for a cat to rub against a man, to lick him. Uncovered by a woolen cover microcracks in the epidermis take the pathogen, passing into the blood class An accurate diagnosis is usually established posthumously when examining the brain. It is this organ that suffers from the virus the most.

Is rabies treated in cats?

Hitting the warm-blooded animals, rabies is fatal. 2% of the survivors of the abortive form versus 98% of those who died from the classic Rabies. The statistics are the same for cats, people, dogs, coyotes , raccoons , foxes, bats. Wild animals are the main carriers of rabies, so the virus is also called forest. The causative agent is severe as the laws of wildlife. 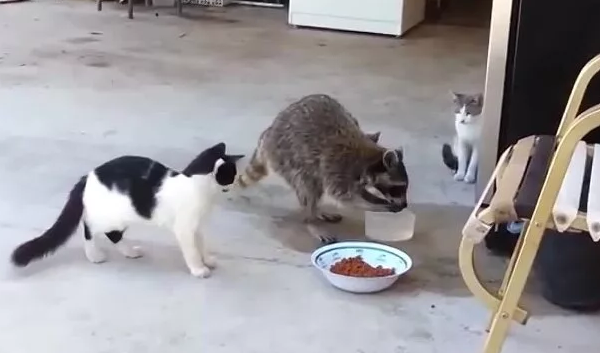 Most common carriers of rabies are wild animals.

Cat’s rabies can be cured only by blocking it at the beginning of the incubation stage. Emergency vaccination, a course of immunostimulating agents and antibiotics help. When taking a pet to a vet clinic, it is advisable to wash the bite with soap.

Alkalis in its composition inhibit the virus. Under standard conditions, it moves along neurons at a speed of 3 millimeters per hour. If you go to a doctor this hour, the probability of saving a mustache is close to 100%.

In addition to alkalis, the causative agent of rabies deactivates carbolic acid. It comes in some peels for the skin. Excess substance or a long stay on the covers cause their irritation, swelling. 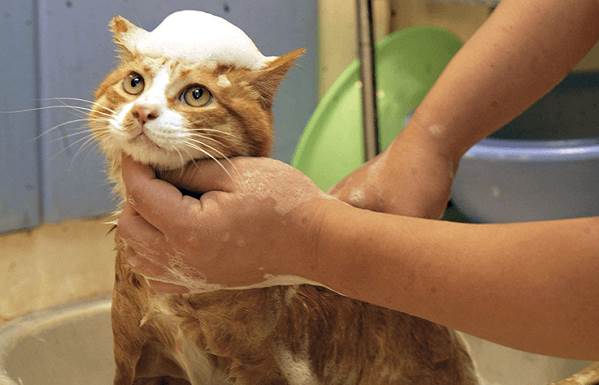 This is nothing compared to the risk of fatal infection. However, as in the case of soap, treatment with a carbolic compound should be combined with urgent medical care.

The best prevention of rabies is the preventive vaccination of a cat. For the first time she put three-month kittens. To consolidate immunity need annual repetition of vaccination. For her recommended drugs:

“Quadricat” is a polyvaccine that acts against rabies and a related group of viruses. Other vaccinations produce immunity only to forest rabies. Such vaccines are classified as «mono.» 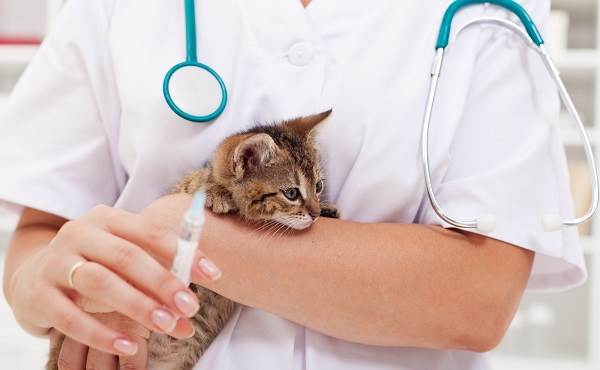 What to do if your cat was bitten?

Knowing how madness manifests itself , people rush to take the bitten cats to the veterinarians and place them in a clinic under quarantine. The actions are correct. However, you need to take care of yourself.

Eliminate your own contact with the animal and wash the skin with soap. After the veterinary clinic, hurry to the infectious diseases hospital to provide emergency medical care to yourself. Cat bite can not only wandering, but also neighbor’s dog or house cat . Knowing the owners of the animal, you can ask whether the offender has not been bitten in recent months.

Watching the aggressor over the years, some are confident that their cat simply contacted the bully and fighter. In every yard there is a dog that bites everything and everyone, being absolutely healthy. 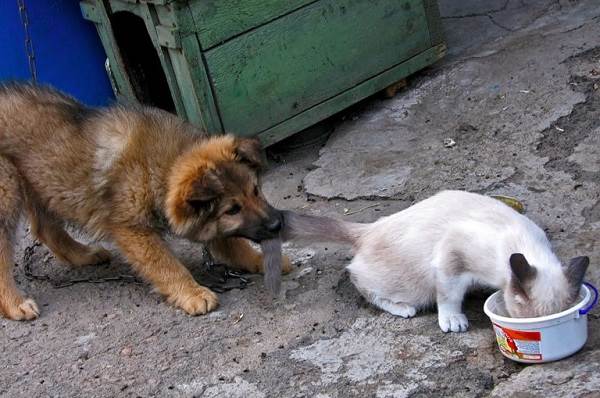 If there is no confidence in the offender, the cat should be taken to the veterinarians. If the injury is significant, a visit to the clinic will not interfere with a normal wound.

What to do if a rabid cat bit a person?

Signs of rabies in a person after being bitten by a cat , as well as in other warm-blooded animals, appear in a few weeks, and sometimes even months. The manifested ailment is invincible. It is possible to block the virus only in the first days after the bite.

Cat grip, many underestimate. The sharp and small teeth of the baleen leave unobtrusive marks. Punctures quickly tightened. Meanwhile, the penetration of the sharp teeth of the cat is deep, and the saliva is crammed with harmful bacteria. The latter cause swelling and itching. This is considered the norm for cat bites. 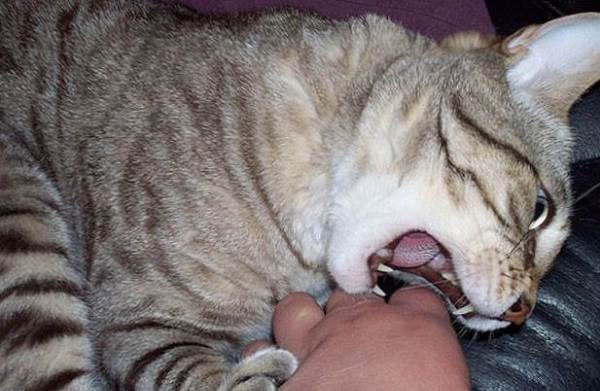 Meanwhile, itching in the area of ​​damage is the earliest sign of infection with Rabies. It is important to remember the saying “God protects you,” and go to the hospital immediately after the bite.

Urgent vaccination is only 50% of success. In order for the vaccine to work, it is important to follow a number of rules. Doctors ask:

On the load the body responds by weakening the immune system. Also, the energy needed to combat the causative agent of rabies is spent on active work. There is little “striving” of a vaccine.

The drug, by the way, was created in the 1885th year in France. Prior to this, humanity was not protected from Rabies even by vaccinations. Above the cure, struggling with the disease in the active stage, are still working.

Rabies in dogs: the first symptoms and signs, prevention and treatment