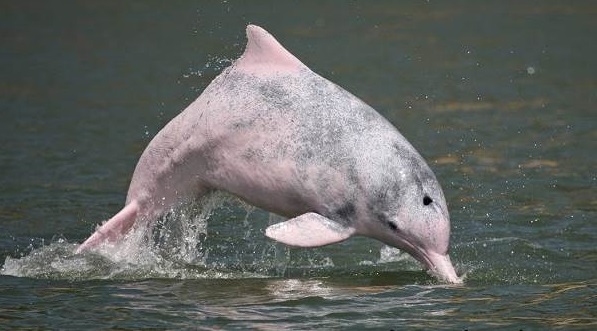 Biologists believe that the reason for their extinction lies in the poaching activity, the discharge of substances of chemical origin into the reservoirs, and the disturbance of the natural ecosystem (the construction of dams, dams). Animals could not live in artificial conditions, so science does not know many of the nuances of their existence.

Description and features of the river dolphin

The Amazonian river dolphin is a real record holder among the members of the river dolphin family: the body weight of river dwellers is from 98.5 to 207 kg, and the maximum body length is about 2.5 meters. 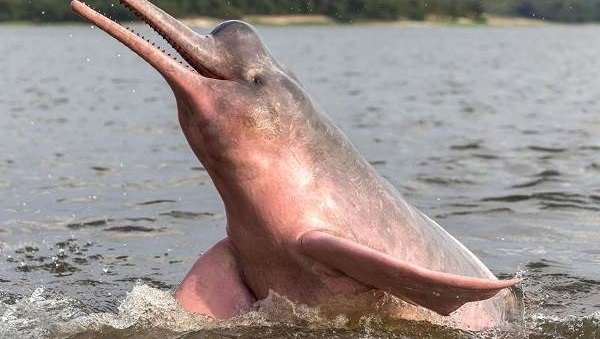 On a photo the Amazonian dolphin

Due to the fact that animals can be painted in light and dark shades of gray, heavenly or even pink, they are also called white river dolphins and pink river dolphins .

The hue of the lower part (belly) is several tones lighter for the coloring of the body. The snout is elongated, slightly curved to the bottom, in its form resembles a beak, the forehead is rounded and steep. On the beak are hairs with a rigid structure, which are designed to perform a tactile function. The eyes are yellow and their diameter does not exceed 1.3 cm. 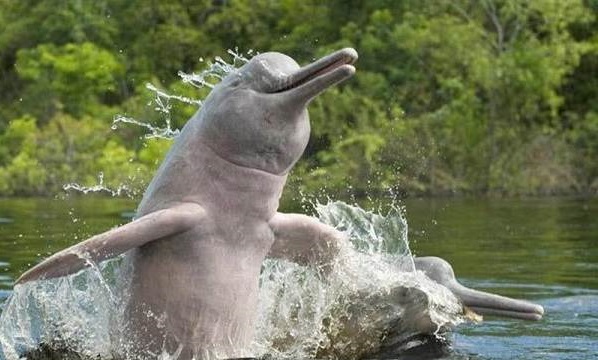 The fin on the back of the Amazonian dolphin replaces the ridge, whose height ranges from 30 to 61 cm. The fins are large and wide. Animals are capable of performing jumps higher than 1 m.

Ganga dolphin (susuk) dark gray, smoothly turning into gray on the abdominal cavity. Length — 2-2.6 m, weight — 70-90 kg. The type of fins is not much different from the fins of the Amazonian dolphins .

Snout elongated, the approximate number of teeth, 29-33 pairs. Tiny eyes are not able to see, and perform a tactile function. Ghanaian dolphins are listed in the Red Book under the status of «endangered species», because their population is very small.

Laplat dolphins length is 1.2 -1.75 m, weight is 25-61 kg. The length of the beak is approximately one sixth of the length of the body. The number of teeth 210-240 pieces. The peculiarity of this species lies in its color, which has a brown tint, and also these dolphins are characterized by hairs that fall out as they mature. Fins in their appearance resemble triangles. The length of the fin is located on the back of 7-10 cm.

River dolphins have very poor eyesight, but, despite this, they are perfectly oriented in the pond due to excellent hearing and echolocation abilities. The river inhabitants of the cervical vertebrae are not connected to each other, which allows them to turn their heads at a right angle to the body. Dolphins can reach speeds of up to 18 km / h, under normal conditions they swim at a speed of 3-4 km / h. 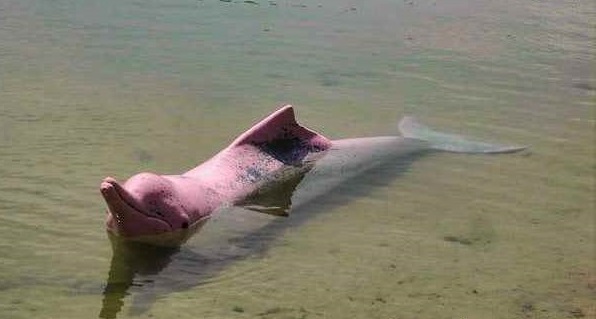 The residence time under the water column varies from 20 to 180 s. Among the sounds emitted can be distinguished by clicking, screeching on high tones, barking, whining. Sounds are used by dolphins for communication with relatives, as well as for the purpose of echolocation.

Listen to the river dolphin

In the daytime, the river dolphins are active, and with the onset of night they set off to rest on the sections of the reservoir where the flow rate is much less than in places where they stay during the day.

Where do river dolphins live ? The areal of the Amazonian river dolphins are the large rivers of South America (Amazon, Orinoco), as well as their tributaries. They are also found in lakes and places near waterfalls (higher or lower along the river).

During long droughts, when the water level in the reservoirs falls heavily, dolphins live in large rivers, if there is plenty of water from the rainy season they can be found in narrow channels, or in the midst of flooded forests or plains. 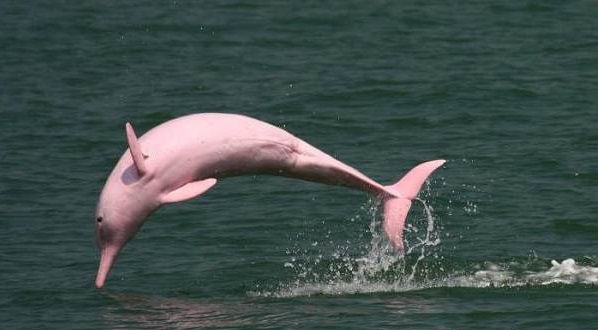 Ghanaian dolphins are common in the deep rivers of India (Ganges, Hongli, Brahmaputra), as well as in the rivers of Pakistan, Nepal, Bangladesh. During daylight hours, it dives to a depth of 3 meters, and under the cover of night goes to a shallow depth in search of prey.

Laplat dolphins can live in rivers and seas. They live near the eastern coast of South America, the mouth of La Plata. Mostly river dolphins live in pairs or small flocks, which consist of no more than a dozen individuals. In the case of the abundant availability of food, dolphins can create flocks several times larger.

They feed on fish , worms and clams ( crabs , shrimps , squid). The rivers inhabited by dolphins are very muddy; animals use echolocation to find food.

White river dolphins snout fish, and also use it as a tool for catching mollusks from the bottom of the reservoir. For prey sent to the river with shallow depth. 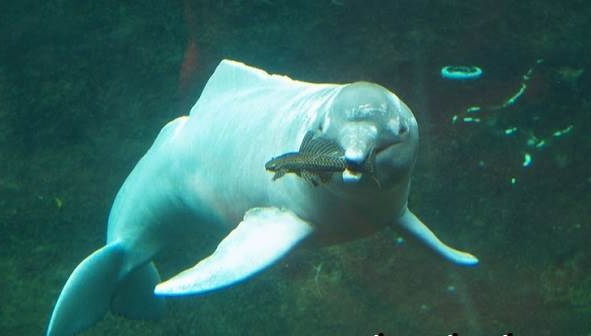 They prefer to hunt alone or in small groups. Dolphins take fish with their front teeth, and then move it to the rear teeth, which firstly grind the head and only after the animal swallows it, crush the rest. Large prey is torn to pieces, first biting off the head.

Reproduction and life expectancy of a river dolphin

Sexual maturity in river dolphins begins at about the age of 5 years. Pregnancy lasts for 11 months. After the baby is born, the female immediately pushes him out of the water so that he takes his first breath.

The body length of the cub is 75-85 cm, weight is about 7 kg, the body is painted in light gray. Soon after the appearance of offspring, the males return to the rivers, and the females with offspring remain in place (in the ducts or valleys that were flooded after the water level rose). 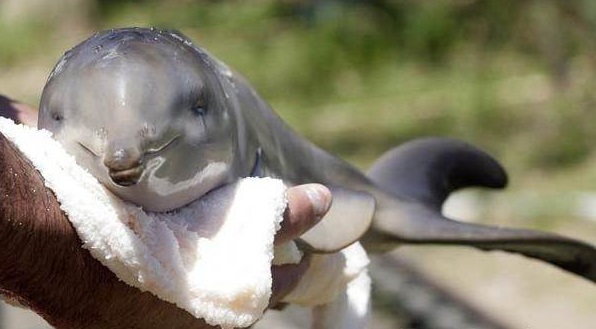 In the photo the young dolphin

Preferring such places, females protect the offspring from lack of food, predators, as well as from aggressive actions on the part of foreign males. Offspring is kept close to the mother until about 3 years of age.

It is not uncommon for the female not to complete the lactation process once again become pregnant. The break between matings can be from 5 to 25 months. River dolphins live no more than 16 — 24 years.