Description and features of a saber-toothed tiger

The saber-toothed tiger treats family of saber-toothed cats who died out more than 10 000 years ago. They belong to a sort of makhayrod. So predators nicknamed because of terribly big twenty-centimetric canines which in a form reminded edges at daggers. And besides were jagged at the edges, as well as the weapon. 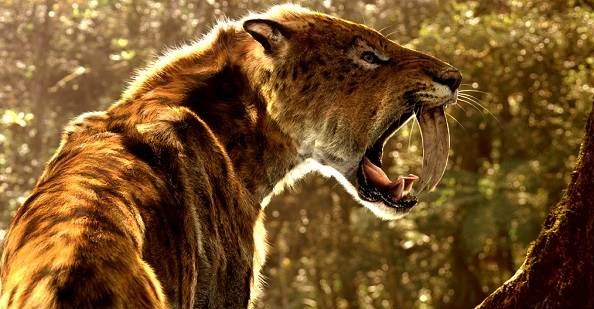 When the mouth was closed, the ends of canines were lowered below a chin of a tiger. For this reason and the mouth revealed twice more widely, than at a modern predator.

The mission of this terrible weapon still remains a riddle. There are assumptions that males attracted with the sizes of canines the best females. And during hunting put mortal wounds to production which from strong loss of blood became weak and I couldn’t escape. Could and by means of canines, using as a can opener, to tear off a skin of the caught animal.

The animal a saber-toothed tiger, was very impressive and brawny, it is possible to call him the «ideal» murderer. Allegedly, its length was about 1,5 meters. 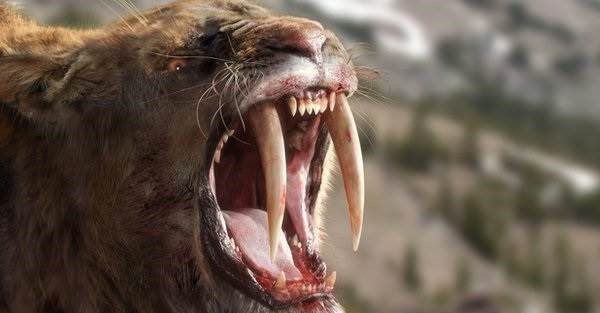 The body leaned on short feet, and the tail was similar to a stump. About any grace and cat’s smoothness in the movements with such extremities, there couldn’t be also a speech. Reaction speed, force and intuition of the hunter came out on top, after all long he too couldn’t pursue production because of a structure of the body, and quickly was tired.

Assume that coloring of a skin of a tiger was rather spotty, than striped. Primary color was camouflage shades: brown or red. Hearings, about unique white saber-toothed tigers go. 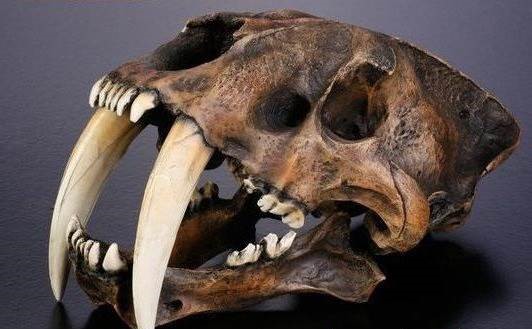 On a photo skull of a saber-toothed tiger

In family cat’s and now albinos so with all courage it is possible to claim meet that such coloring met and in prehistoric time. Ancient people met a predator before its disappearance, and it the look, undoubtedly, inspired fear. It can be tested and now, having looked at a photo of a saber-toothed tiger or having seen his remains in the museum.

There lived saber-toothed tigers prides and could come for hunting that does their way of life rather similar to lions together. There are proofs that living together, weaker or wounded individuals ate due to successful hunting of healthy animals.

Habitat of a saber-toothed tiger

Saber-toothed tigers long enough dominated in territories of modern South and North America since the beginning of the Quaternary Period – a pleistocene. In much smaller quantities, remains of saber-toothed tigers, were found on continents Eurasia and Africa.

Fossils which found in California in the oil lake which was once ancient place for a watering place of animals became most known. There, as in a trap, both the victims of saber-toothed tigers and hunters got. Thanks to environment, a bone and that and others perfectly remained. And scientists continue to receive new information about saber-toothed tigers. 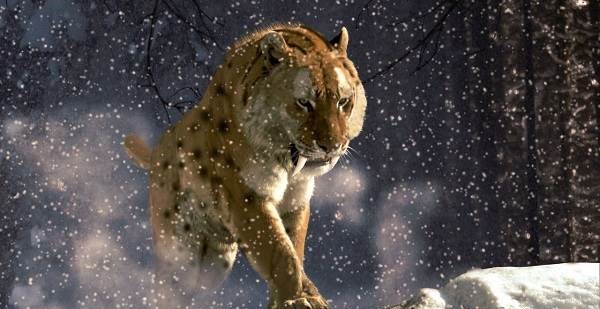 Sites, with low vegetation, similar to modern savannas and prairies were habitat for them. As saber-toothed tigers lived and hunted in them, it is possible to see on pictures.

As well as all modern predators, they were carnivorous. And differed in big need for meat and in large quantities. They hunted only on large animals. Prehistoric bisons, three-fingered horses, idlers and big hobotny were such. 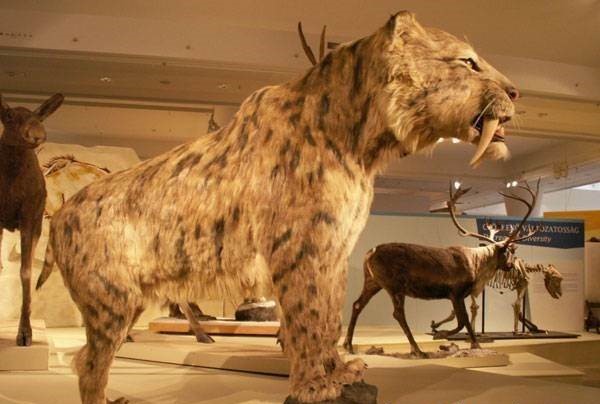 Saber-toothed tiger in the museum

Saber-toothed tigers and could attack a small mammoth. Animals of the small sizes couldn’t add a diet of this predator because it couldn’t catch them because of the sluggishness and eat, to it would stir big teeth. Many scientists claim that the bad period for food a saber-toothed tiger didn’t refuse and drop.

Reason of extinction of saber-toothed tigers

The exact reason of extinction isn’t established. But there are some hypotheses which will help to explain this fact. Two of them are connected directly with food of this predator.

The first assumes that saber-toothed tigers ate not meat, and production blood. The canines, they used, as needles. Piercing a body of the victim in a liver, also drank up, the following blood.

Hulk remained untouched. Such food I forced to hunt predators almost whole days and to kill many animals. It was possible before Ice Age. After when the game practically didn’t become, saber-toothed tigers died out from starvation.

The second, more widespread, says that extinction of saber-toothed tigers is connected with direct disappearance of animals who made their habitual diet. And on another, they could be reconstructed because of the anatomic features simply not.

Now there are opinions that saber-toothed tigers are still live, and they were seen in the Central Africa by hunters from local tribes which call him «a mountain lion».

But it isn’t documented, and remains still at the level of stories. Scientists don’t disprove opportunity existence and now some similar copies. If saber-toothed tigers and, however, are found, they will get at once on pages of the Red List.