Содержание скрыть
1 Description and features of the tarantula
2 Reproduction and life expectancy of a tarantula
3 Tarantula food
4 What to do if bitten tarantula?
5 Types of tarantulas 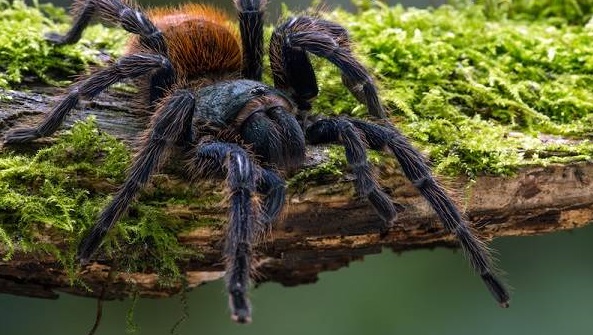 Description and features of the tarantula

Type — arthropods, class — arachnids. The shaggy body consists of two parts: 1-head-chest, 2-belly, which are connected with the help of a tubule — a small stalk. Head and chest covered with chitin; the abdomen, on the contrary, is soft and tender.

8 eyes, located at the top, resemble a periscope, help to see the terrain from all sides at once. The tarantula’s legs are clawed for extra grip when lifting, like a cat’s. In the wild, tarantulas usually move on the earthen surface, but sometimes they have to climb a tree or other object. 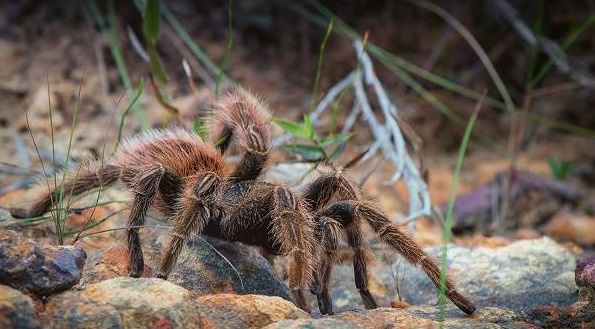 In the event of a life threatening tarantula, the hind legs tear off hairs from their abdomen and throw them into the enemy (if this happens, irritation and itching is felt — an allergic reaction).

At times of danger, sounds are made that resemble the vibration of the teeth of a comb. Have a great ear. Recognize the sounds of human steps at a distance of 15 km. Tarantulas of brown or black color with red spots and stripes. In nature, there are small, medium, large tarantulas. American spiders reach sizes up to 10 cm. Our much smaller transatlantic relatives: females -4.5 cm, males -2.5 cm. 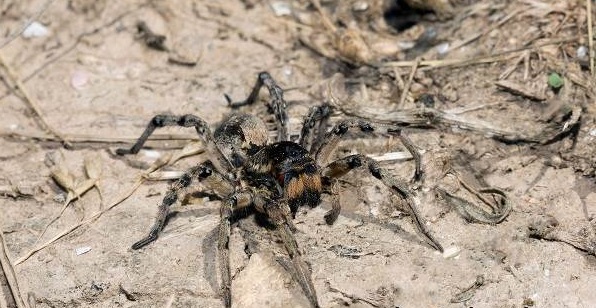 Minks dig to a depth of half a meter near the reservoirs. Pebbles clean. The interior of the dwelling closer to the entrance is covered with cobwebs, the threads are pulled deep into, their vibration tells the tarantula about the events taking place at the top. In the cold period, the hole is deepened and the entrance is interlaced with cobweb foliage.

Reproduction and life expectancy of a tarantula

In the warm season, adults are searching for a pair. In males, the instinct of self-preservation is dulled, so they can be noticed even during the day. When he finds a female, he tapping his feet on the ground, vibrates his abdomen and quickly moves his limbs, announces his presence.

If she accepts courtship, she repeats the movements behind him. Further everything happens at lightning fast. After the transfer of sperm, the male runs away so as not to be eaten by the female, because during this period she needs protein. Then the female falls asleep until spring in her hole. 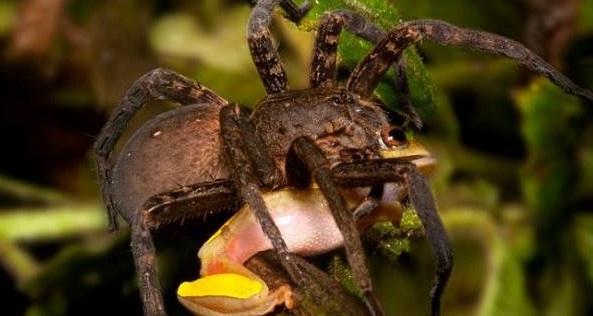 In the spring, it will come to the surface to expose the abdomen to the sun’s rays, then lay eggs (300-400 pcs.) In a woven web. Then he puts in a cocoon and carries on himself. As soon as the babies give signs of life, the mother will gnaw through the cocoon and help the spiders get out. Kids will be placed on the body of their mother multi-layered until they become independent. Then the mother will disperse the young, gradually throwing off from themselves.

Actively hunt at night. Large spiders catch mice, frogs, birds; small — insects. And do it very carefully. Slowly creeps up to the victim, then quickly jumps and bites. Large prey haunts a long time. The spider catches insects near its hole, does not go far, as it is attached to it with its own web. First, he will bite the victim, inject poison into it that dissolves the internal organs, then it just sucks it all out. 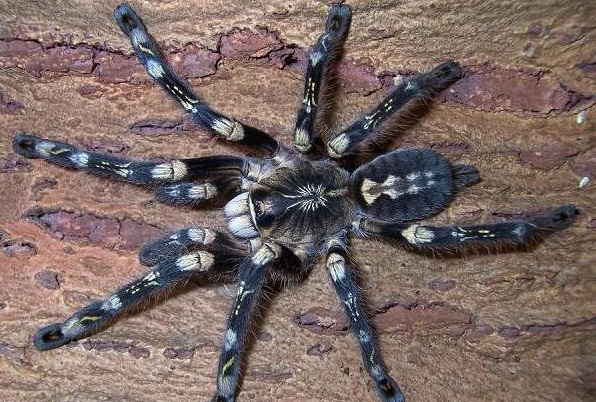 Eats already inside. It also happens that an unwary beetle, cricket or grasshopper gets into the hole. If suddenly the web breaks, the spider will not find the way home, you will have to make a new one.

What to do if bitten tarantula?

Tarantulas are amazing animals. These are quite peace-loving spiders, although large individuals strike terror. It is worth looking at them more attentively. In captivity live more than 20 years, females longer than males.

The largest representatives reach the size of a dinner plate (about 30 cm). Bad reputation they received from directors unfairly. Many people like to intimidate people with horror movies involving spiders. 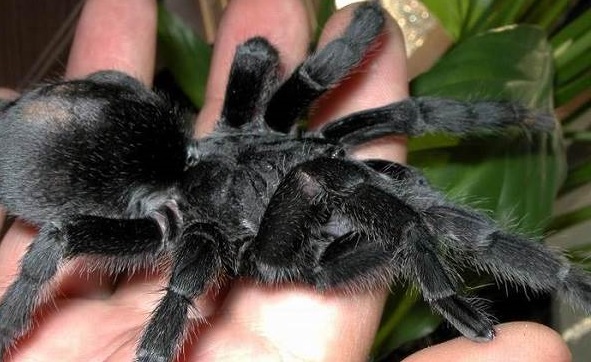 In fact, they are obedient and rarely bite. For such a large predator, like a man, the poison will not be enough. The spider, most likely, will act rationally, and will not attack a large, dangerous object. Tarantulas are easily visible creatures. They have very thin skin on the abdomen. Fall is deadly to him.

Therefore, do not take a spider in his hands. They produce silk for their web. For females, silk is necessary in the “interior” of the burrow to strengthen the walls; for males, as a packing material for storing eggs, traps near the mink are also made of silk.

Tarantulas grow all their lives, change their exoskeleton several times. Using this fact, they can recover lost limbs. If you lose a leg, in the next molt he will get it, as if by magic. It may not come out exactly the right size. Here age, time of the previous molt is important. But it does not matter. The leg will grow with each molt, gradually acquiring the desired length.

Brazilian coal black is a popular home spider. Awesome, black as pitch, is cast in blue, depending on the lighting, its size is 6-7 cm. It is calm, elegant — and you can say, an obedient spider. 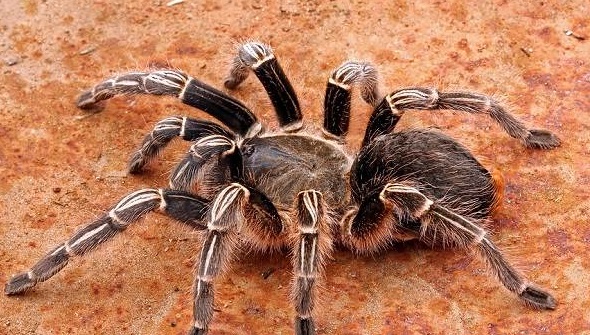 Originally from southern Brazil. The climate there is humid, frequent rains. In warm time (May-September), the temperature rises to 25 degrees, and in cold weather it drops to 0 degrees. Due to slow growth, they grow up only by 7 years of age, they live a long time, about 20 years. The cold period is spent in the hole, so the bottom of the terrarium is carpeted with a fairly thick layer of substrate (3-5 inches).

Suitable soil, peat, vermiculite. In nature, the tarantula lives in forest litter with stones, hides in the roots of trees, hollow logs, abandoned by rodent holes, therefore, shelters and indentations are needed in the substrate.

Small crickets are suitable for feeding to young individuals, large adults, other insects, small lizards and naked mice are suitable for adults. For him in a terrarium (10 gallons, not necessarily high) should be put a shallow container with water (suitable saucer).

Can starve for several months. In Russia, the South Russian tarantula is well known. Its color is different: brown, brown, red. Habitat — steppe and forest-steppe zone of the south, in recent years and the middle zone of Russia. 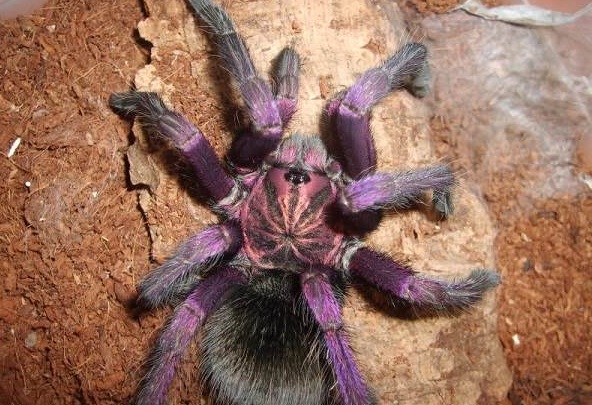 -Apuleisk is a poisonous spider. In size, larger than ours. The distribution area is Europe. -Happy-baby is cheaper, but because of good appetite it grows faster than other fellows. Chilean pink — pet shops often offer it.

The most beautiful and expensive type of Mexican tanned — is prohibited for export from natural habitats. — Golden — a friendly creature, so named because of the bright colors of huge paws, whose dimensions grow more than 20 cm. The new look and is expensive. 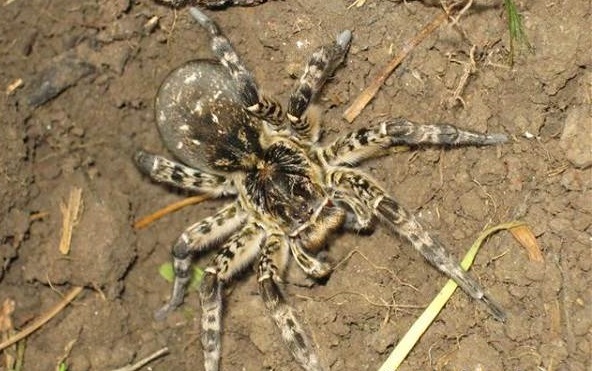 -Cartikan striped — difficult to maintain, does not bite, but with a bad habit of disappearing. -Athonoplem Copper, now you can buy, but not in the store, but by request. Online stores provide an opportunity to see the tarantulas in the photo and see the prices.