Waterman — an insect that can walk on water. It is not difficult to observe such interesting creatures in the wild, resting in the summer on the shore of some calm pond.

The water strider has an elongated shape, and in appearance it resembles microscopic boats, gliding quickly on the surface of the water. A water strider (a class of insects) is the owner of long, slender legs, with the help of which with ease it moves on the surface of water bodies, similar to a virtuoso skater, whose art and skill were taken care of by nature itself.

The body of such creatures, as one can see on the photo of a water strider , is externally comparable to a thin stick. Their abdomen is completely covered with white hairs, supplied with a special waxy substance, therefore the little body of the creature and its legs do not get wet while moving through the water.

In addition, air bubbles are formed between the microscopic hairs, which make it possible for insects not to dive into the water surface, despite the fact that their tiny weight also contributes to that. This is all an explanation of why the water strider does not sink . 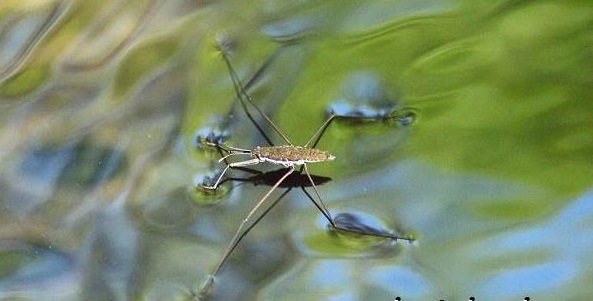 On a photo waterfall

The structure of the legs also helps to skillfully move these creatures. Though thin, they are significantly thickened at the sites of attachment to the body and equipped with extremely strong muscles that help develop a tremendous speed compared to the size of these creatures.

The description of the water strider can be continued by mentioning that about seven hundred species of such small creatures live in nature. Belonging to the order of bedbugs, water striders are the closest relative of this insect .

Among the known species is a large waterman, whose body reaches a length of about 2 cm. It has wings and reddish body coloring. A pond rider, no more than a centimeter in size, is colored brownish and has light limbs. Males and females of this variety of insects are easily distinguished by the color of the abdomen, as in the first case it is black, and in the second — red. 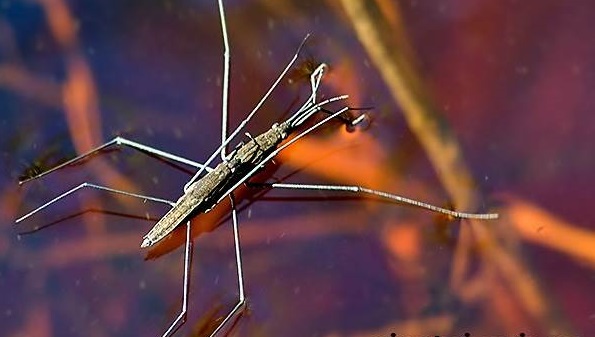 A peculiarity of a water strider’s life is the ability to take root in the dangerous raging abyss of huge saline reservoirs. These creatures include marine waterman. Its size is quite small even in comparison with its freshwater relatives.

The length of this creation reaches only 5 mm. These brave creatures, accustomed to fighting the rebellious sea abyss, are able to develop an impressive speed for such microscopic creatures that is approximately comparable to the ability to travel on human land. Such insects inhabit the Indian and Pacific oceans. They can be observed even at a distance of several kilometers from the coast.

Why was the water fighter so named ? The name of the insect surprisingly accurately conveys its way of life, because all this time allotted for existence, this animal is engaged in measuring its watery surface with its wonderful long legs, which is an essential habitat for the strider . 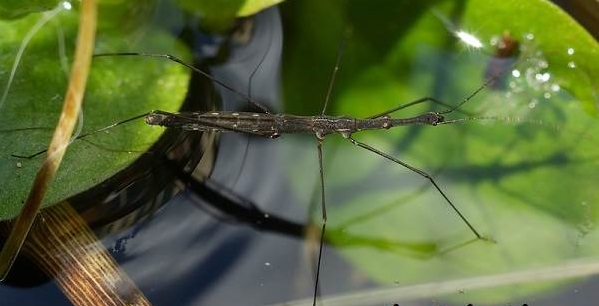 These insects are owners of three pairs, different in size, legs. Their front legs are shorter than the others and are used, including, as a kind of steering wheel, that is, to regulate the direction and speed of movement.

With the other two pairs pond skater — bug carries sliding in the water, like in a boat rower acting their paws. In addition, this living creature has a mustache located on the head, capable of capturing even the most subtle vibrations of the aquatic environment, serving as small creatures as a kind of receiver of necessary information from the outside world as organs of touch and smell.

Insects have a dark brown, brown, sometimes even almost black color, which will give them good protection, making them invisible to enemies, especially birds of prey , whose prey they may well become. 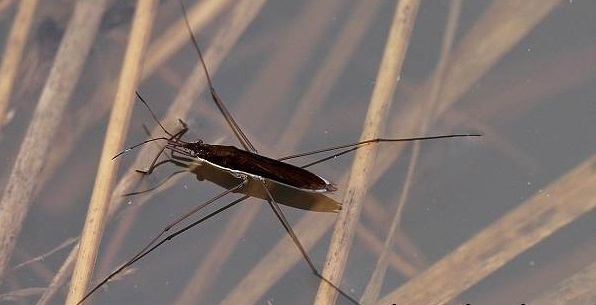 Being a inhabitant of not only ponds and quiet lakes , but also small puddles, the water strider is able to fly from drying places of shallow reservoirs with the help of webbed wings hidden under elytra. It is true that these insects are not very adapted to flying, making air movements extremely rarely and only as needed.

If a water strider in the water creates unexpected obstacles, which can be aquatic plants or small waves on a quiet surface of the water, it can make a dexterous jump, pushing its paws off the water surface, thus overcoming, hindering its progress, the obstacle. The described jumps help her to make long hind legs.

Like a floating beetle , the water strider uses his paws as a kind of paddle. But unlike the mentioned insect relatives, it is not adapted for scuba diving. 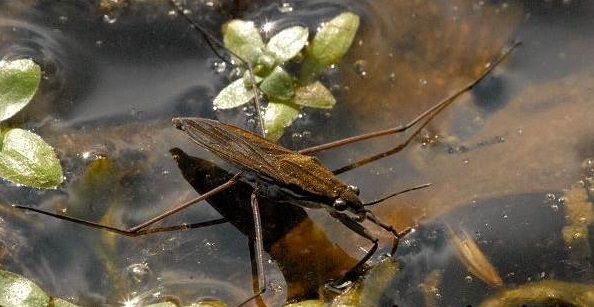 In the photo river streamer

Rowing the water with its limbs, it creates water turbulence, only helping its movement and making it possible to move not only along the quiet water surface, but also through the turbulent waves of the ocean. She wields long legs like oars, placing them widely and skillfully distributing her body weight over a large area to reduce pressure on the water.

Being excellent runners on water, water striders are not at all adapted for significant movements on the ground, in the possession of which they enter only when the need comes to settle in the winter “apartments”.

In their persistent search for a safe haven, they awkwardly seed over land. Their shelter from the cold can be a variety of crevices in the trees and their bark, as well as suitable plants, for example, moss.

It is surprising that a small, seemingly innocent creature — the insect strider , is a real predator. These creatures not only eat their own class kin, but even attempt on more substantial prey, feeding, for example, on small representatives of the animal world, which they manage to find among their water possessions.

They are able to see their prey with the help of the organs of vision of the spherical shape, that is, the eyes they possess. Their front limbs are equipped with special hooks that they use to capture their victims.

Among other things, the water strider has a sharp proboscis, which floats, sticking and sucking the valuable contents. Having been fed, she compactly folds her device, bending under her chest, so the proboscis does not interfere with the movement of the water striders and their usual life activity.

Among water striders there are frequent fights between themselves because of the tidbits that they strive to hold with their front paws. They use the same limbs, entering into a struggle with their kinsmen-rivals and taking their prey from them.

The weakest insects, being unable to, clinging to, hold on, taking away their values, lose the tenacity of the front paws, often fall and fly head over heels in an unknown direction. And the most dexterous and cunning contenders win, fleeing with a delicacy to a secluded place, so that on the sly to enjoy the won prey.

The water strider lays his eggs on the leaves in the water of the plants, sticking them with special mucus. Similar formations from the side resemble a jelly-like long cord, representing deposits of several dozen testicles.

Sometimes the clutches are made in one parallel row without the use of a mucous substance, thus forming a kind of a chain of insect eggs. Laying smaller species of these creatures are different in that the testicles are simply stuck into the soft tissues of plants.

Males are actively involved in all events, to the extent that they accompany their “girlfriends” during the laying of clutches, protecting them from dangers and protecting them. Waterman papas guard their territory in the marriage period with jealous perseverance, stopping all the encroachments of rivals in the most decisive manner. This is the way the reproduction of these insects occurs.

The process of reproduction of its own kind is tirelessly accomplished by sexually mature water striders all summer days. And the larvae that appear in a couple of weeks go through all stages of development in about a month, and soon turn into adult individuals.

Young animals can be distinguished from parents only in body size and in appearance of a short, swollen abdomen. Water striders live for about a year. And the number of this species of insects does not threaten any danger, since these peculiar creatures firmly fit into the overall picture of the animal world.